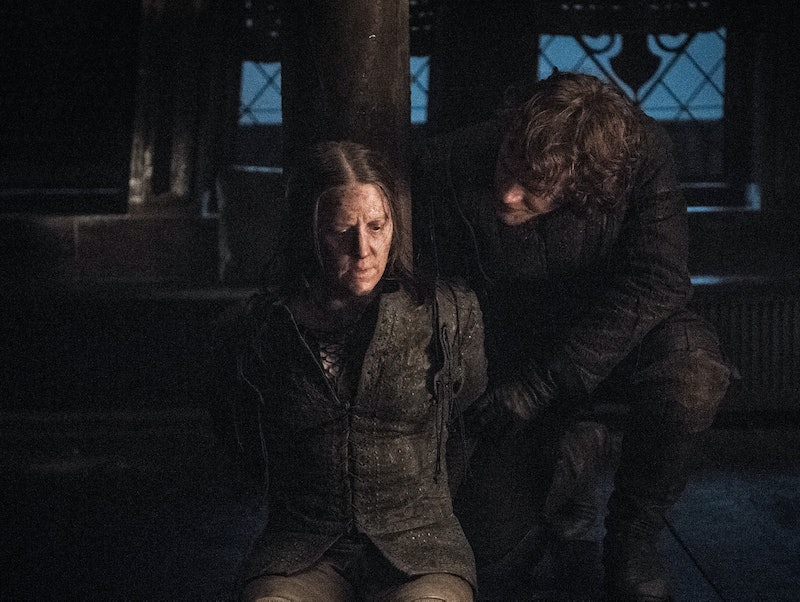 There may be more Game of Thrones characters alive and kicking after the Battle of Winterfell than you expected, but still more of our Westeros favorites were stuck to the sidelines. Now that the "Great War" is over, what happens to them? Will Yara return on Game of Thrones? Surely, the saga of House Greyjoy is not over yet.

So little is known about Game of Thrones Season 8, especially the three remaining episodes, that there's absolutely no way of knowing whether she will return or not. Theon's sister can't be spotted in any of the promotional images or clips from Episode 4 either, unfortunately. (There's maybe a shot of a dragon flying over a ship that might not have Targaryen sails.) However, unlike some surviving characters such as Ellaria Sand, Meera Reed, and Daario Naharis, Yara's story hasn't really finished.

The last time we saw Yara, she was freed from Euron's clutches by her brother Theon. He went off to Winterfell to essentially lay down his life for Brandon Stark, who he betrayed in the early seasons of Game of Thrones, while she went back to the Iron Islands to reclaim their homeland and become Queen. Is she gone forever? Doesn't seem likely.

Before Daenerys teamed up with Jon to take on the Night King's army, Yara was on her side and fighting for her cause. Without the Dothraki and Jorah Mormont, among others, the Mother of Dragons is losing supporters left and right. She should probably call on the remaining Greyjoy forces that are loyal to her.

The Dragon Queen may also be looking for a new romantic partner, as well, if Jon Snow isn't feeling it any more. House Targaryen was known for marrying off siblings and cousins, but Jon seems put off by the revelation that his girlfriend is his aunt. Yara wasn't not flirting with Dany when they first met. It could happen.

On the other hand, if Daenerys, or Jon Snow, or another fave takes over the Iron Throne and tries to set up a new government with the remaining characters in the Game of Thrones finale and everyone pitches in, they're going to need a Master of Ships. Who better to take that position than Yara Greyjoy? (Get your Gendry rowing memes out of here, we've had enough of that.) It's the perfect job for her in the ideal new world.

There's just one major political problem. Remember how Sansa asked Daenerys what would become of the North when and if they defeated Cersei Lannister and took back the Throne? House Greyjoy also sought their independence from the Seven Kingdoms. That's how Westeros ended up with the War of the Five Kings in the first place — Yara and Theon's father Balon Greyjoy was one of those Kings. If Dany isn't careful, she could end up fighting a War of Queens with Sansa, Cersei, and Yara. This is also the second time the Iron Islands have attempted to secede from the Throne, too. They're serious about it.

Once she regains power, Yara may not wish to bend the knee to Team Targaryen at all. If you thought the Game of Thrones drama ended with the Night King, you may be sorely, sorely wrong.