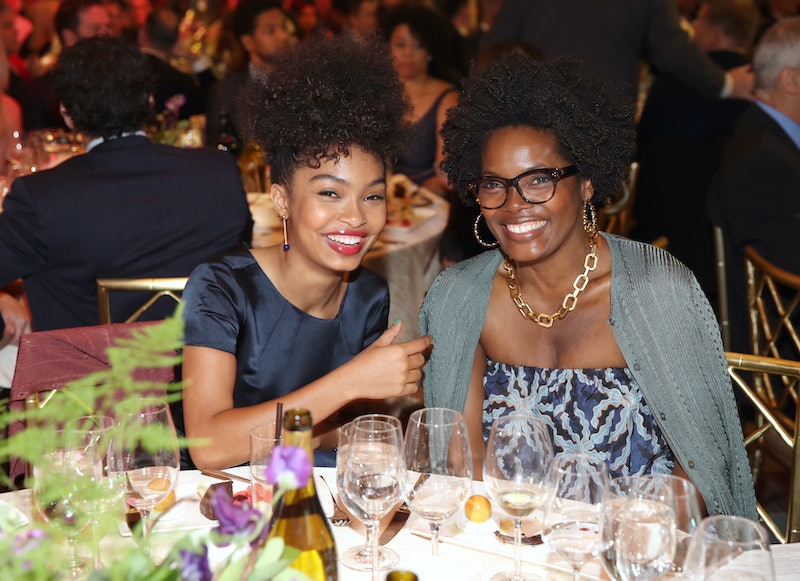 Yara Shahidi has quickly become one of Gen Z's most prominent voices, but there's someone from another generation whom she counts among her influences. Yara Shahidi's mom, Keri Shahidi, is super supportive of her daughter's endeavors, and everything the actor has said about her mom is super sweet.

During a Refinery29 interview published in March, the 19-year-old said that she and her mom are super close, and they don't really fight. "Mommy and I are genuinely best friends, while she is still very much my parent," Shahidi told the site. "It helps that we're the same person in different bodies with just minor deviations."

And in a Teen Vogue interview published last May, Shahidi also shared some of the wisdom her mom has imparted to her over the years. When asked what the best advice her mom has given her is, the actor had a thoughtful response. She said to the magazine,

"That my opinion is worthy. As a young girl, there are so many pressures, especially as a woman of color. She taught me to understand that I am qualified for any of the conversations that I'm a part of, whether it's with executives or a school principal. I'm supposed to be there."

Shahidi also praised her mom for being "open to conversation" with her during the Teen Vogue interview. "Having a mother who is interested in knowing and is not dismissive of the differences between our generations is really special," she told the magazine.

The love is definitely mutual, too — Keri frequently posts photos of her daughter on Instagram, along with captions about how proud she is of the actor. "She glows 💜 watching her blossom is a gift I never imagined to be so exciting! #daughter," Keri captioned one photo last month.

More recently, Shahidi talked about her relationship with her mom in an interview with Town & Country published on May 8. The grown-ish star is on the cover of the magazine's summer 2019 issue, and she talked about her background during the interview. Keri is African-American, while Yara's dad, Afshin, is Iranian.

"Because of my family’s background, I understand how interconnected cultures are," Shahidi told Town & Country. "My love of history, or even being socially engaged, stems from having, firsthand, people to care about around the globe and at a young age expanding my community beyond these fake borders we put on each other."

Identity also plays a big role for Shahidi's character, Natasha, in the upcoming The Sun Is Also A Star, her first starring film role. Natasha's parents are undocumented Jamaican immigrants, and while Natasha was born in Jamaica, she grew up in New York and considers it her home. Natasha's battle to stop her family's deportation makes her see her parents in a new light, too, at least in the novel the movie is based on. And while Shahidi and her character don't share the same background, she's definitely familiar with talking about her own identity and how it's shaped her.

Shahidi's mom has had such a positive influence on her life, and it's clear she'll be there to support her daughter's journey every step of the way.