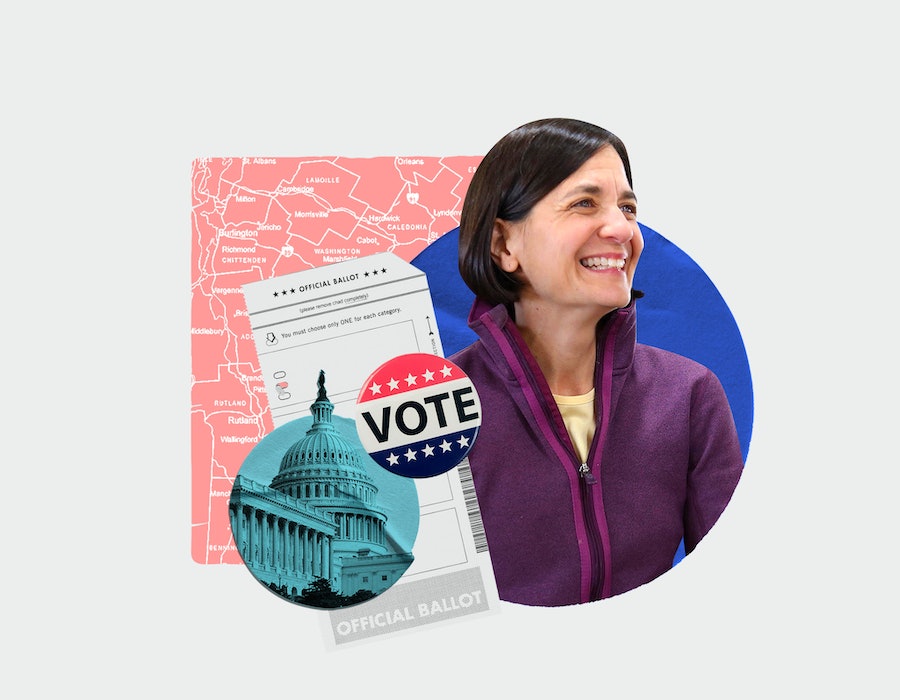 When Becca Balint was campaigning for Congress throughout Vermont this fall, she employed a creative tactic to combat the brisk temps: “Much to my family’s chagrin, I dance most of the time,” says the Democratic representative-elect. “My moves are not great, but they keep me warm.” (In addition to dancing through the cold, she protected her feet with Vermont’s own Darn Tough socks.)

When Balint, 54, takes office in January, she will become the first woman to represent Vermont in Congress — the last state to do so — and also the state’s first LGBTQ+ delegate. She never imagined this for herself. “I remember thinking, ‘This isn’t going to happen in my lifetime,’ like, ‘This is what I want to do, but I’m not going to be able to do it,’” says the Vermont native. “I didn’t have any role models. I didn’t know any out gay politicians.”

In November, Balint defeated her Republican opponent, Liam Madden, with 61.5% of the vote for Vermont’s open, at-large congressional seat. She’ll head to Washington, D.C., after seven years in the Vermont state Senate, during which she served as senate majority leader and president pro tempore. Prior to her time in office, Balint was a middle school teacher for 14 years.

“My first job with an actual printed paycheck was at the Burger King drive-thru in my hometown.”

“To know at 17 what you think you’re supposed to be doing with your life and then to not feel like you can do it until your 40s, and then to really do it, it’s amazing,” says Balint, who doesn’t consider herself a traditional politician. “I didn’t dress in a brightly colored pantsuit. I rode a motorcycle. I have a wife. I have kids. I’ll drop an F-bomb from time to time.”

She views this as an advantage. “Policy is best crafted when you have a diversity of experience in the room, whether it’s more voices from women, from queer people, or from people of color,” she says. “You write legislation that meets the needs of more people.”

Below, Vermont’s first woman and LGBTQ+ member of Congress shares a few other “firsts.”

Two women who put me up at their apartment every time I’m in the northern part of Vermont. They’re good friends of mine.

A movie called Personal Best with Mariel Hemingway. It’s about two track stars who end up having a lesbian affair. They don’t end up together, which [was the case] for most of my childhood. The [characters] never ended up together. I’m so glad movies are being made now where they end up together.

When I was in middle school, my brother and I had a lawn care business, totally off the books. My first job with an actual printed paycheck was at the Burger King drive-thru in my hometown.

I was actually born outside of the United States. My dad was in the military. He came here as an immigrant and ended up only being able to go to college via the ROTC program. [When] he was stationed in Germany, I was born there on an Army base.

At 18, I voted on a school budget issue because I was the student representative to my school board.

I know I’ve missed midterm elections, but I really try my best to vote every time I’m able to.

When I was in high school, I was a government nerd. I remember working really hard to make sure a program in my high school that was supporting young women in sports wasn’t going to take a hit because the boys’ JV football team was getting better uniforms.

When I first ran, nobody asked me to run. When I was a state senator, I definitely had people encouraging me to run for governor and Congress.

When folks like Bernie Sanders and Elizabeth Warren reached out and basically said, “We think you’re the right person for this.” On a local level, it was when tons of young people started to show up at our parades.

More like this
Savannah Guthrie Got Her First-Ever Tattoo With This Former Wild Child
By Suzanne Zuckerman
Jessica Simpson On The Time She Was Pursued By A Backstreet Boy & An *NSYNC Member
By The Editors
At 28, Rosie Perez Risked Her Career To Stop Playing Stereotypes
By Gabrielle Bondi
Hailee Kaleem Wright's Topsy-Turvy Path From MTV To Broadway
By Samantha Leach
Get Even More From Bustle — Sign Up For The Newsletter
From hair trends to relationship advice, our daily newsletter has everything you need to sound like a person who’s on TikTok, even if you aren’t.