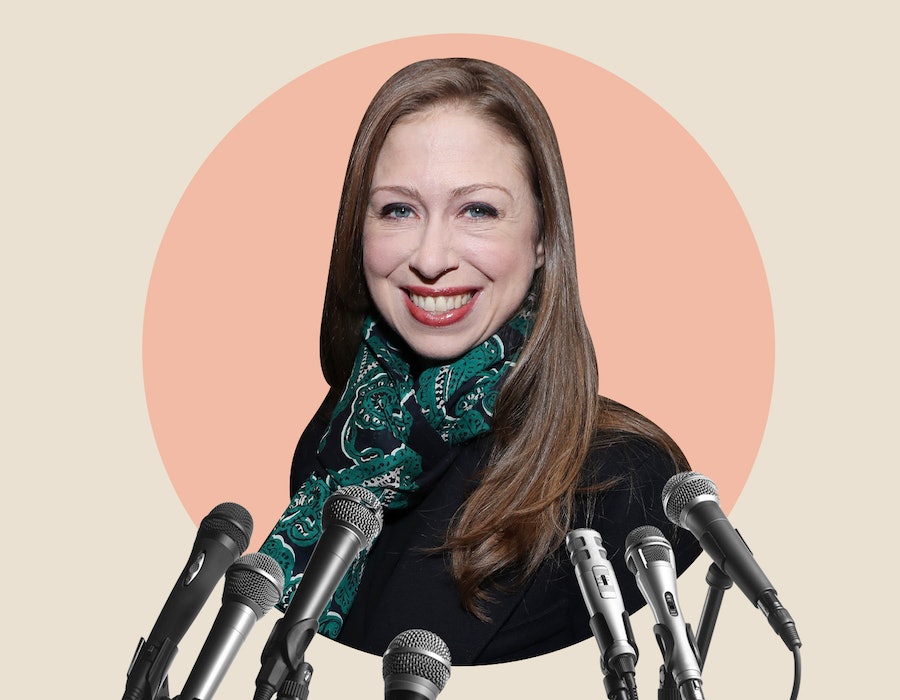 In one of my favorite scenes in Apple TV’s new docuseries, Gutsy, Hillary and Chelsea Clinton are taking a tango dance class. (Yes, as in former secretary of state, senator, and noted hot-sauce enthusiast Hillary Clinton.) They stand opposite each other in brightly-colored dresses, deciding who will lead. Gutsy is unscripted, but this moment feels particularly unplanned. Hillary quickly acquiesces control to her daughter as the music starts, but barely 30 seconds later, she’s somehow usurped command of the dance. They laugh. There’s an “of course-ness” to their reactions. You can practically hear Chelsea’s internal monologue: “Mom…”

This particular episode, of eight, focuses on motherhood and mothering. At one point, they flip through a photo album and talk about Chelsea’s childhood in the public eye. She’s 42 now, a global health advocate with three kids under age 10, and is — much like her mother — trying to make a hard world softer for children and adults alike.

This week, in her role as vice chair of the Clinton Foundation, Chelsea returned to the stage for a different sort of dance: After a six-year hiatus, the group’s tentpole event, the Clinton Global Initiative (CGI), returned to New York, welcoming global leaders and activists — people like Dolores Huerta, Malala Yousafzai, New York Governor Kathy Hochul, and Melinda French Gates.

“It’s great to be back,” Chelsea tells Bustle at the annual event, which began in 2005. “It feels great to be in community with so many people who are problem-solvers, and it feels great that we have the most diverse and youngest group of participants ever.”

CGI participants were required to make commitments toward positive change, many of which are unveiled throughout the event. (French Gates, for example, pledged $50 million to a Rwandan university from the Bill and Melinda Gates Foundation.) This year alone, CGI celebrated more than 140 commitments, which will create more than 1.6 million jobs.

Below, Chelsea talks about being prepared, dealing with haters, and a Buckingham Palace faux pas.

“I got more shy and reticent as I got older, partly in reaction, candidly, to my parents being who my parents are.”

Since the last CGI, do you think your leadership style has changed?

Oh goodness, yes. I hope I’ve evolved positively in the last six years. I think I have a clear sense of who I am and where I want to spend my time and energy.

I’ve been thinking about how to be more inclusive, and ensure I’m hearing not only from the people I want to hear from, but the people who I need to hear from. I’ve been thinking about how to have the right balance of confidence and humility. Becoming a parent helped me feel my confidence in a more instinctive and deeper way, so that I feel more right about where I’m investing time — and not investing it in areas where other people are better equipped, better purposed, better able to make a difference.

Thinking of people you admire, do they have leadership styles you want to emulate in your own work?

At times, I want everyone to understand 18 reasons why I think [something] is important. I want everyone to know everything. And sometimes people, even those who might agree, are going to tune out by reason four. So I’ve really had to work on how to communicate. The saying about brevity being the soul of wit I think may not always be about cleverness, but about being able to build consensus. Like, “OK, these are the three or four things that we’re working toward that we hope to achieve.”

When you’re working to build consensus, whether in a meeting or at an event like CGI, do you have specific ways you prepare?

I like to be overly prepared, which I know is something that we women really struggle with, because sometimes we feel like only if we are over, over, over prepared are we even prepared. And yet it would be disingenuous to say I don’t do all my reading and make my own notes. Even if I get recommended remarks, I’ll often rewrite them in my own words, my own cadence. That’s when I feel I can call a meeting to order, because I know everything I want to achieve.

Do you feel like there was a certain period in your life when you were able to come into your leadership potential?

I had a fair bit of confidence from my parents, my grandparents, but particularly from my teachers in Little Rock. Then I got more shy and reticent as I got older, partly in reaction, candidly, to my parents being who my parents are and wanting to lead a private life, and “do my work” and “put my head down.” When I campaigned for my mom in 2008, [I became] more comfortable through being uncomfortable. Speaking publicly was really far outside my comfort zone. And then when I started teaching, when I was working on my Ph.D., that further helped push me in different directions.

That makes sense. Do you see any of your leadership qualities coming from one parent or the other?

I think the need to be prepared comes from both my parents. Particularly my mom, though also my dad.

What’s the best piece of advice you’ve been given?

There are two pieces of advice, one from my grandmother and one from my mom. My grandmother said, “Life is not about what happens to you. It’s about what you do with what happens to you.” I believe that so deeply. And then my mom’s always told me some variation of, “Sticks and stones can break your bones, but words can never hurt you.” Or, you know, “You need to have thick skin, but also don’t tune out people who are giving you constructive criticism.” And the way that I’ve filtered that is to take serious criticism from serious people seriously, and to take unserious criticism from unserious people unseriously.

Oh, I like that. Has a serious person ever given you bad advice, or advice that wasn’t helpful for you personally?

Definitely. I’ve gotten advice [about] how to prepare to speak publicly that hasn’t been particularly useful for me. I find practicing in front of a mirror really distracting. I find myself looking at my eyebrows or the way my mouth is moving and not actually listening to what I’m saying.

In interviews for Gutsy, your mom has said what she would’ve asked Queen Elizabeth had she been on the show. The queen’s funeral is today. What was your experience of meeting her?

I met Her Majesty when I was on a state visit with my parents 20 years ago. And my main impression was someone of extraordinary dignity and duty. She made me feel comfortable to ask questions about the history of Buckingham Palace, and I got a little tour and everyone was very kind to me. I later learned I should not have worn a pantsuit, which I didn’t know at the time, but I was later told I should have worn a dress. But no one told me before I went, but I felt badly about that afterward.

Did anything she said stick with you?

More [than words], her dignity, the real warmth of her introduction.

And a final question before you’re pulled back to CGI. Looking toward the midterms, who’s inspiring you?

Oh my gosh, so many people. I’m super inspired by Val Demings in Florida. I think she is amazing and I am so impressed by her campaign and how she is so clear about why she’s running and why she deserves everyone’s vote to serve the people of Florida in the U.S. Senate. I continue to be so impressed by Senator Warnock, who continues to have to explain why climate change is real, or why we have an obligation to one another, and yet he does it with such brilliance.

More like this
The Indigo Girls Taught Me Queer Relationships Could Be Messy, Too
By Hannah Soyer
Elizabeth Debicki On Her Approach To The Most Debated Scene From 'The Crown'
By Grace Wehniainen
Dua Lipa On YSL Beauty, Plus Her Fearless Approach To Hair & Makeup
By Erin Stovall
Michelle Williams Laughs Often About Motherhood Thanks To 'The Fabelmans'
By Marina Watts
Get Even More From Bustle — Sign Up For The Newsletter