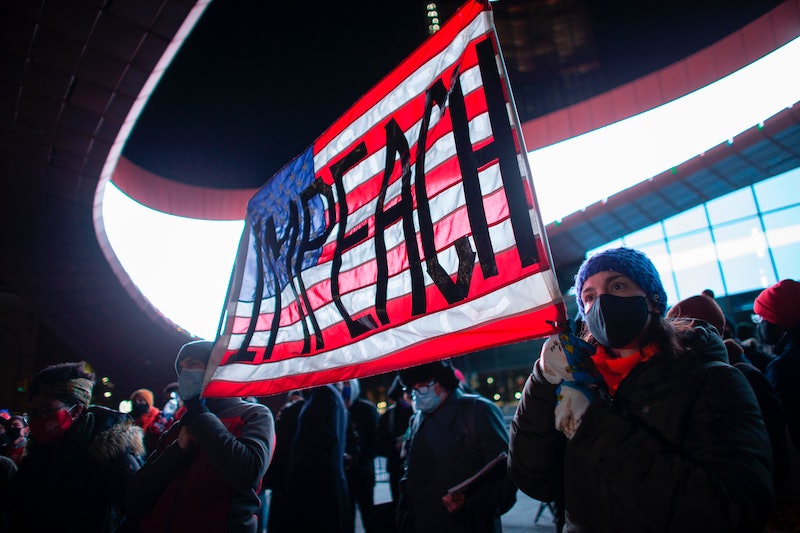 For the second time, the House of Representatives has voted to impeach Donald Trump. He is the first president in United States history to be impeached twice. This time around, the spark that moved members of Congress to take the unprecedented step was the deadly Jan. 6 attack on the U.S. Capitol.

More than 210 representatives co-signed the singular article of impeachment, which accuses Trump of "incitement of insurrection," citing his unrelenting, disproven claims about the 2020 election results and his volatile Jan. 6 speech, in which he urged rally attendees to march on the Capitol and "fight." The article zeroes in on one line from the speech: "If you don't fight like hell, you're not going to have a country anymore."

Trump, for his part, has denied all culpability in inciting the Capitol attack. On Jan. 12, the House of Representatives passed a resolution calling on Vice President Mike Pence to invoke the 25th Amendment, in which he would take over as acting president. Pence immediately refused, despite reports of a rift between the two following the attack.

Some Republicans, such as Rep. Nancy Mace, have argued that impeachment now, with just days left in Trump's presidency, would only further divide the country. Other GOP lawmakers, such as Rep. Liz Cheney, support the impeachment. During the Jan. 13 debate, Democratic Rep. Ilhan Omar said, "We as a nation can no longer look away ... We cannot simply move past this or turn the page."

Next, the article will likely be sent to the U.S. Senate, which won't reconvene before Jan. 19. If two-thirds of the upper chamber vote to convict Trump, which is unlikely, they could vote on an additional resolution to bar him from holding public office again, and from receiving benefits under the Former Presidents Act, which include a yearly salary for the remainder of his life, a whopping $1 million per year for security and travel, plus $500,000 per year for his spouse, office space in federal buildings, and a fully funded staff.