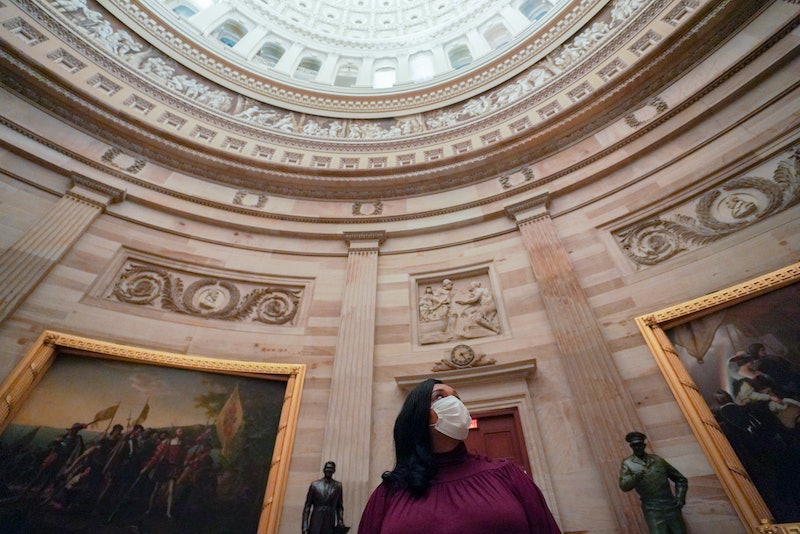 On Jan. 6, Georgia freshman representative Nikema Williams was preparing to make her first-ever speech on the House floor when insurrectionists stormed the Capitol building, attempting to halt the certification of the presidential election results. Hiding in her office that day, Williams wondered if the color of her skin and her political affiliation made her the insurrectionists’ next target.

Now, two weeks and an impeachment later, Williams has had time to reflect on the events of Jan. 6. She tells Bustle about the images she can’t stop thinking about, the contrast of Georgia’s Senate runoff win, and what needs to happen for the United States to begin to reckon with its history of white supremacy.

Can you walk me through what happened on Jan. 6?

I got to the Capitol a bit early because I anticipated heavy protester activity. I told myself that if I got to the complex early, I would be in one of the safest places in the country.

Right before the insurrection, I was in my office preparing my remarks for my first-ever time speaking on the House floor, about certifying Georgia’s 16 electoral college votes for President-elect Joe Biden. I was supposed to go over to the chamber when Arizona was concluding, but I didn’t quite get that opportunity. I looked up at the TV and saw that people were being escorted out of the chamber. My husband called me and said, “What’s going on? I’m watching C-SPAN and they just removed Speaker Pelosi from the chamber.”

I didn’t understand what was going on until I went on Twitter. That’s when I saw that armed domestic terrorists had taken over the Capitol. I saw an alert that other buildings in the complex were being evacuated, but I never heard anything specific about where I was supposed to go. The office building next to mine, which is connected by a tunnel, had been breached.

We found out so many things that we were just not prepared for that day. We have a loudspeaker system in the Capitol, but it wasn’t working in every office, so I could only hear things from a distance. There were supposed to be panic buttons in the office, but ours didn’t have any.

I just sat there terrified. My staffers and I moved away from the windows, turned off the lights, and closed the blinds. At one point, I told my chief of staff to turn off the location sharing on her phone so that no one could find us. Every noise I heard, I thought it was someone coming to breach where we were.

What has stood out the most to you in the 15 days since the insurrection?

All the images of that day keep going through my mind. That night when I returned to the chamber, I saw the doorway that had been shot out when they breached the floor. The image of the Confederate flag being paraded through the Rotunda especially sticks out. I knew exactly what that symbol was meant to say to me — that white supremacists had taken over our Capitol. That I was in a place that they didn’t want me to be.

I was in a space that was not made by or for people who look like me, but I am determined to make it work. I am the president of our freshman class of representatives, so I started to compile a letter asking how this insurrection was able to happen. Why were new members not prepared? Why were high-level security precautions not in place? I’m still waiting on answers. [Ed. note: on Jan. 15, the departments of Justice, Defense, Interior, and Homeland Security announced internal investigations into the security failures at the Capitol leading up to and during the insurrection, the Washington Post reported.]

I mean just — as I learn more details, the more upset I get because it looks as if there were people inside the United States Capitol who were supporting and helping these armed domestic terrorists find their way through the Capitol.

How do you feel being back at work?

I never thought showing up to work as a member of Congress would be the work of resistance, the work of bravery, the work of patriotism. We can’t let domestic terrorists into our government. Our democracy is fragile, but we will work to uphold the oath of democracy of this country and work for the people.

Going in every day has been such an experience, because we’re seeing more stories about Capitol police officers who have been let go or are under investigation for their alleged roles in the attacks, and yet I’m supposed to trust the ones who are still there for my safety and protection? That’s a hard thing to balance in my mind. [Ed. note: as of Jan. 20, three Capitol police officers had been suspended, per the New York Times, with 17 others under investigation.]

There’s also a sense that the Capitol insurrection robbed Georgia Democrats of the ability to celebrate the Senate runoff win.

It definitely wasn’t lost on me that I was up all night on Tuesday reveling in the fact that we’re sending the first-ever Black man, Rev. Raphael Warnock, to represent Georgia in the United States Senate. Then, while we were on lockdown, with the Confederate flag being paraded through the Rotunda, the race was called for the first-ever Jewish man, Jon Ossoff, to represent Georgia. This contrast is proof that we can move forward as a country and hold people accountable. We can’t let them steal what happened in Georgia away from us.

It pains me to hear my House colleagues say that Democrats are causing division in this country, that Democrats are the ones stoking the flames, when we were the ones who were targeted. I often get asked about my ability to work with the other side, and my answer to that is a quote by author Robert Jones, Jr.: “We can disagree and still love each other, unless your disagreement is rooted in my oppression, and denial of my humanity and right to exist.”

We had armed domestic terrorists storm the Capitol, and some of my colleagues were supportive of those protesters, those rioters, those domestic terrorists. Their disagreement was rooted in the denial of my existence and humanity and right to exist. So I know there are some people I can’t work with.

What conversation about white supremacy needs to happen to move forward?

We have to come to terms with how Black people live in that constant state of — I don’t even know how to describe it. What the country went through on Jan. 6 is my everyday as a Black woman. I’m expected to suppress that — to assimilate in a country that hasn’t always loved me back or made it easy for me to exist. Now I’m in one of the highest levels of government and have the opportunity to demand the country do something about it. So I’ve signed on to H.R. 40, the bill to study and develop reparations proposals. We have to start to amend what has been done to Black Americans.

We saw on TV that the people who invaded our Capitol, these domestic terrorists, are living all around us in our communities. They are special education teachers, bakers, and members of our military. We cannot pretend white supremacy doesn’t exist.