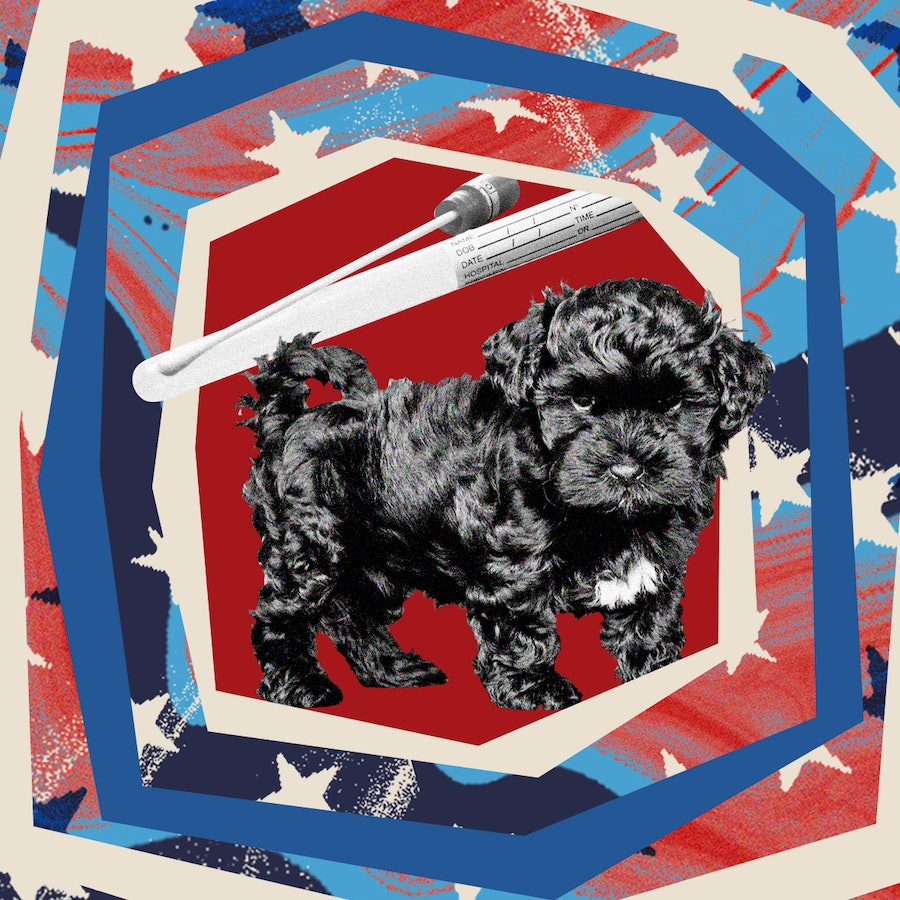 A few months ago, during what I’m calling the fall of white supremacy, I got my dog DNA-tested. The connection might seem strange but is maybe a little easier to understand when I tell you my dog is black. Black black. His Blackness earned him the name Sammy Davis Jr. Jr. because he always looks like he’s wearing a Rat Pack tuxedo with his little white feet and tightly-coiled black curly hair. My dog’s hair is so Black, I have to buy products to care for it out of the Black hair care aisle in CVS because it’s closer to African American hair texture than dog fur, when left to its own devices it twists and locks.

When I rescued him from the top of the kill list at my local shelter eight years ago, I was told he was Havanese. I was skeptical. Black dogs and cats are adopted at much lower rates and are more likely to be euthanized than other animals (there is even a term for it, black dog syndrome), and a lot of campaigning is done by volunteers to make black pets more likable. Giving one a fancy breed, for instance. Every time I told Sammy’s admirers, curious passersby — veterinarians even — that my dog was Havanese, they always insisted he was something else.

“He can’t be Havanese,” a vet told me once, pointing to the posters on the office wall of standard dogs, against which show dogs and breeds are evaluated. There, the Havanese is a pure white dog with straight or wavy hair. Its name is actually the shortened form of the name Blanquito de Habana, which means “the white dog of Havana,” and when the breed was Cuba’s official dog, white — supposedly — was all there was. For years, I Googled dogs like Sammy, looking for verification that a dog that was both nearly all black and Afroed could be something other than a mutt.

The denial that accompanied me and Sammy’s encounters with “dog people” gave me pause because it was so similar to how people have always approached me. Oh, what kind of dog is he? was the doggy equivalent of the No, where are you really from? question I’ve gotten from white people for as long as I can remember, across two coasts and multiple states. The underlying assertion is always the same. That I’m not American. That America belongs to a pure white race.

When a man gets elected to president on a racist platform, those of us most at risk in the fallout start sorting out whatever documentation that we can: updated passports, long-form birth certificates, the deeds to houses, and — in my case — a doggy DNA test.

This idea was the foundation of Donald Trump’s pivot from business to politics, the “birther” conspiracy questioning the Americanness of the 44th president, a Black man named Barack Hussein Obama. When a man like Trump gets elected to president on a racist platform of building a border wall between Mexico and the U.S. and little else, those of us most at risk in the fallout start sorting out whatever documentation that we can: updated passports, long-form birth certificates, the deeds to houses, and — in my case — a doggy DNA test.

Like many Black Americans, I am of African, indigenous, and European ancestry but have spent decades trying to get white people to recognize this. At 10, I sat at the feet of my mother’s First Nations great grandmother — a woman whose original name was lost to her childhood internment in a re-education camp. On my father’s side, freemen established an entire town in Texas during the 1800s, before Trump’s folks had ever touched American soil. But at 11, when I created a family tree that included these facts of my ancestry, the teacher sat my mother down for a conference and suggested I was lying. That I’d made up stories to make myself more interesting, as if I were trying to claim a larger place in the American landscape than a Black person could have.

Mid-September was the last time I had someone yell “Go back to Africa” as a drive-by, while I sat parked on the side of the road waiting for directions from white police. I thought about how Trump had terrorized Rep. Ilhan Omar with a chant of “send her back” at a 2019 rally, and I bought the dog DNA test. We were four years into the racist noise machine that was 45’s reign, and about to decide whether he would get another four … it was time to solidify Sammy’s Havanese citizenship.

It’s not that I actually thought a DNA test, for myself or my dog, would keep me safe in this climate. But the prospect of holding papers that claimed, at least for one of us, our rightful place in the legacy of a country was a thought that kept me from losing my mind. As a BIPOC American, it is scary to think that I can’t produce some neatly packaged story that connects my ancestors to the Pilgrims or Ellis Island because records of those sorts were destroyed or never kept, in a targeted effort to keep us from ever thinking of ourselves as more than livestock. We have been written off as either property or collateral in the books to forcibly maintain America’s white supremacist mythology.

Then Trump lost, and his supporters took to the streets with their decrepit racism and claims of fraud, unable to believe that BIPOC Americans have enough power to vote, organize, and turn five swing states from red to blue. In the days leading up to the Million MAGA March, alt-right group Proud Boys affiliate Kyle Chapman staged a coup of the organization in a post on Telegram, attempting to shift the group’s rhetoric from “Western chauvinism” to straight-up white nationalism. “We recognize that the West was built by the white race alone and we owe nothing to any other race,” he said. Sammy and I read the news and shook our heads. Groups like the Proud Boys felt pure race rhetoric would carry this nation to another Trump victory. To us, this is quite funny, because the Proud Boys can’t even maintain the purity of the white race in the Proud Boys.

The Million MAGA March is a rip-off of the 1995 Million Man March, a gathering of Black citizens and thought leaders converged on the same Capital Plaza, meaning Trump supporters couldn’t even label their fight without stealing from another race. (Similarly, the Proud Boy’s first chairman Gavin McInnes co-founded VICE magazine, which popularized the term “hipster” for displaced whites of McInnes’ generation; before that, hipster was a term for the Black anti-establishment. Yup, they stole that too.) Funnier still, the name “Proud Boys” allegedly comes from a song cut from Disney’s Aladdin “Be Proud of Your Boy,” a song about the struggles of the title character, a young man of African and Asian descent. The current chairman of Proud Boys International is Enrique Tarrio, who is both Black and Cuban — not unlike Sammy, my pup.

Sammy's test came back, and he is now certified Havanese, 100%, purebred.

If you’re asking how Enrique Tarrio, a Black Cuban man, could be the leader of what’s currently America’s most ubiquitous hate group, it's not only in America that white supremacists have rewritten to recast the “West” as all white faces. Tarrio talks fondly of how the Proud Boys reminded him of growing up in Little Havana with his Cuban family, their celebration of “the West,” and, speaking specifically of the United States, “what our founding fathers have built.” The only thing you need to be a white supremacist is the belief that white culture is more foundational than anyone else’s, including your own.

But that “white is right” thinking denies how deep color runs in the fabric of the American continents. In his recent poem “Origins,” Peruvian-American poet Bobby Sanchez describes reclaiming his native identity from within the broad brush designation of Latino, which flattens Peru’s history. “They created the term ‘Latino’ because they wanted to rob the Indigenous identity in me,” he says, “in order to erase the Indigenous and African diaspora in Latin America so that they forget where they came from.” A purebred America never was — and never will be — a pure white one. No matter how much cruelty, violence, erasure, and euthanization have been used in the Americas for decades to uphold this myth, my Sammy is still here. I am still here. I am calling this fall the fall of white supremacy because I have the right to revise the future in my favor — as white extremists have done for centuries — and so do you. After all, aren’t we worth more than the history of dogs?