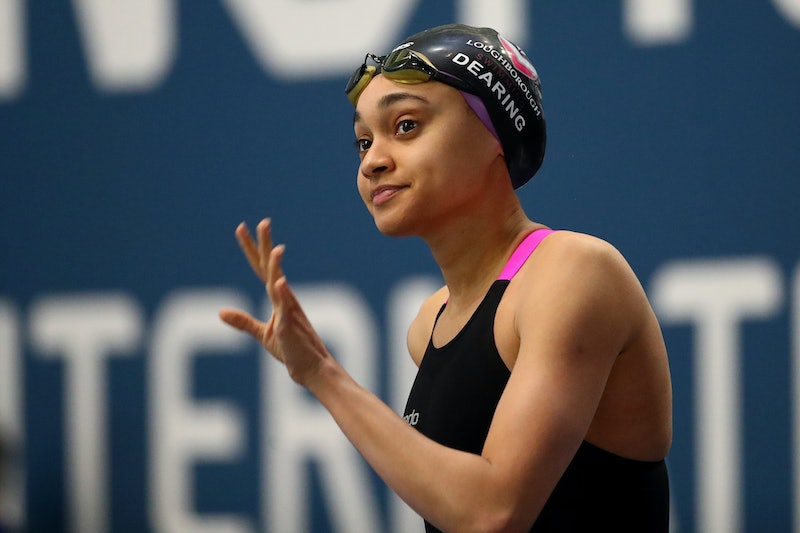 With the huge number of 35 pool swimming events wrapped up at the Olympic Aquatics Centre at the Tokyo 2020 Olympic Games, today (August 5) attention turned to the open water swimming event of marathon swimming. Hoping to make it to the podium was Team GB swimmer Alice Dearing, the first ever female Black athlete to represent Great Britain in a swimming event at the summer Olympics.

Who is Alice Dearing?

Dearing is a British swimmer born 23 April 1997, who grew up in Oldbury, a town in the suburbs of Birmingham, England. According to an interview with Channel 4, she picked up swimming at age nine at a local pool. Dearing, 25, continued to train throughout her teens, waking up before school at 4:30am and sometimes not returning until after 7pm whilst she was still studying at the Royal Wolverhampton School, per the Express and Star.

Not every teen would be able to maintain the commitment to her grueling training regime, but Dearing stuck with it. “I’d have a wobble pretty much every year where I was like ‘I don’t know if I want to do this’, struggling with having to juggle academics and a social life, which is nearly non-existent as a swimmer,” she told Channel 4 in 2019. But she kept going. She landed a place at Loughborough University to study Social Media and Political Communication, and per Swimming World Magazine is coached by Andi Manley.

In 2016, she became 10km World Junior Open Water champion, the first British gold medal win at the competition. Later that year, Dearing was one of the 33 people to be selected for British Swimming’s Podium Potential programme, a programme designed to help those with the potential to win a medal in the 2020 Olympic Games.

Alice Dearing has an impressive career outside the pool, too

As well as taking on the dedication to her career in the pool, Dearing has been a major advocate for more diversity and representation in aquatics. Dearing formed the Black Swimming Association (BSA) in 2020 with the support of Swim England, a non-profit organisation which encourages BAME communities in Britain to get involved with swimming through access, education and support.

According to Swim England statistics, 95% of Black adults in England do not swim and 80% of Black children have never been swimming. Dearing hopes to change these statistics by demystifying some of the myths around Black people and swimming, and encouraging diversity and accessibility in swimming. "I have heard myths such as Black people can't swim, our bones are too dense, we sink when we get into the water. It's not meant for us," Dearing told Sky Sports News. "I've had Black people tell me they can't swim and I'm like 'you can. I promise you'. You just need lessons - you just need to be taught.”

Whilst she is hoping to be an inspiration to young BAME swimmers, Dearing herself was inspired by American gold medalist Simone Manuel. “She’s broken a huge barrier, I definitely think it’s going to open the floodgates for this,” Dearing told Channel 4.

Did Alice Dearing win a medal in the Tokyo Summer Olympics 2020?

Unfortunately, Dearing was unable to maintain the pace of her competitors in the 10km marathon swim at Odaiba Bay, and was shy of making it to the podium. The tough competition meant Dearing finished in 19th place in the women's 10km marathon swim. But the swimmer had already made history before she took a stroke as she was the first ever Black female swimmer to represent Great Britain at the Olympic Games, and she hopes to use her experience in Japan as motivation for her events in the future.

“The result was not what I had trained for but that was what I had on the day. Sport can be harsh and cruel in that sense but that’s what athletes deal with,” Dearing wrote on Instagram. “Nevertheless, we have helped create history and hopefully forge a path to allow people to make choice based on what they want, not what is expected of them.”

“This is far of the end for my journey as a athlete,” she added. “There’s always lessons to be learned from failure and I’m already excited about my next chance to right some wrongs.”

Given her previous successes and her competition trajectory, plus all of her contributions and campaigning for the Black Swimming Association, we certainly agree this isn’t the last we’ll hear of Alice Dearing.