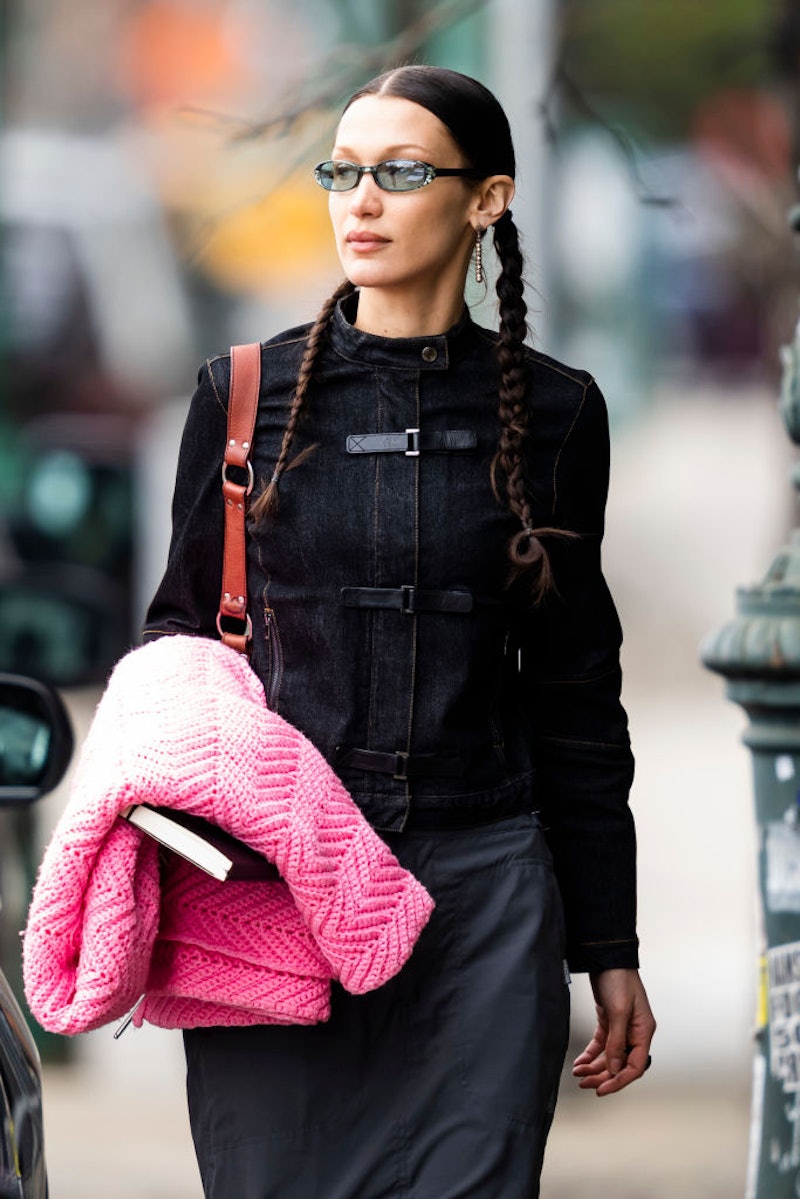 There’s no use denying it: The ’90s are back in a big way. From baggy, skater boy jeans to heavy lip liner, the fashion and beauty looks of late seems to be all about paying homage to the decade of grunge and experimentation. When it comes to hairstyles, you’ve probably spotted plenty of high ponytails, bouncy blowouts, pigtails, piece-y updos, and other nostalgic looks. While there are more low-key styles that keep your strands down and flowy — like the classic half-up, half-down hairstyle — there are countless ’90s updos that make for more interesting alternatives to your standard ponytail.

Credit the revival of throwback updos, perhaps, to celebs like Hailey Bieber and Bella Hadid (who regularly rock classic hairstyles), the popularity of the Pam & Tommy Hulu series, and/or to a good old-fashioned love of the olden days. “I think it has a bit to do with nostalgia,” celebrity hairstylist Sunnie Brook shares. “Now that the kids from the ’90s are adults, there’s a sense of comfort reliving those days.” Today, folks are determined to deliver a lewk while revamping those old-school styles, she says. “Plus, who isn’t in love with the ’90s supermodels?” No one.

For some inspo, keep scrolling for the biggest ’90s updo hairstyles and how to wear each.

Pigtails were spotted on the biggest pop stars of the ’90s, from Britney Spears in the “Baby One More Time” video to the Spice Girls’ Emma Bunton — and, according to bicoastal hair stylist and colorist Juliana Ohlmeyer, they’re back, baby... one more time. Wear them braided or in classic ‘tails for all the nostalgic vibes. Ohlmeyer’s tip? Hair is easier to braid or slick back when it’s wet with a little product. “Use something like Olaplex No. 3 or castor oil to treat your hair as you style it,” she shares. Also: Use a comb.

A messy, voluminous pin-up — à la Pam Anderson — is the quintessential ’90s updo and has made a helluva comeback. Exhibit A: Kim Kardashian rocked the look in May 2022 in Portofino, Italy to sister Kourtney’s wedding extravaganza.

The trick to nailing the bombshell ’90s updo is achieving big, bouncy curls before you reach for the pins — so this could be the way you revamp a classic ’90s blowout on second or third-day hair. Celebrity hairstylist Justine Marjan says to curl with a hot curling iron and then pin to cool. Spray generously with a texturizing spray, remove the pins, and brush through before you style, Marjan suggests. Celebrity hairstylist Mia Santiago also notes you can use velcro rollers for ultimate volume. From there, you’re only a few bobby pins away from a bombshell updo.

You’re not imagining it: Prom-style updos have also been making a comeback. Drew Barrymore wore the look in the 1994 film Bad Girls, and Ohlmeyer calls it “one of the best cool-girl updos of all time.” Mesmerized by the tight pile of bright platinum curls, she says the look “was shown to every girl’s hairdresser before a school dance for the next decade.” And now they’re chic again. For a more modern take, Ohlmeyer recommends first curling your hair and then pulling your strands into a gentle chignon. Leave a few strands out to frame the face.

The French twist is also back, from elegant styles that’d be fit for any black tie event to the more casual versions that nod to Rachel from Friends during her waitressing days, notes Millie Morales, Garnier celebrity beauty expert. For a full va-va-voom effect, Ohlmeyer recommends first volumizing your hair with velcro rollers, then using a round brush to twist your hair into the updo.

Claw clips never really went away, but amid the ’90s style revival, the multi-pronged clips that defined the decade have made their way back to into the mainstream. The best part about it? Wearing a claw clip updo is foolproof: Simply twist your strands and clip ‘em. Your Starbucks runs just got cuter.

For a ’90s updo that’s on the more punk-chic side, it’s all about the sleek topknot with piece-y strands left out in front. Santiago says to begin by using your flat iron. “When your hair is in a high or low top knot, the piece-y look is essential,” she shares. “You will want to keep the loose ends out of your knot straight to make your knot look funkier.” To achieve the look, Brook adds that hair gel is essential — look for “one that will hold but won’t flake.”

Rather than wearing a standard ponytail, pull your strands into a high, tight pony and then braid it. This nostalgic take on the updo is a fave of Hadid’s and Dua Lipa — and it’s super easy to do. Slick your hair back using either a brush or some hair gel, secure it with an elastic, then secure the braid with another. Or, for extra ’90s vibes, secure your strands with a scrunchie.

Every it-girl has also been wearing the Barbie ponytail, a ’90s-inspired trend taken from none other than the Mattel queen herself. It’s like your regular ponytail, but features a side swoop across the forehead and flipped-out ends in the back. To rock it, smooth your strands into a high pony and section the front pieces off to the side with a clip. “Use a beard brush to smooth your hair back to form it into a ponytail and get a smooth, shiny finish,” Candice Hollub, bridal hair educator and owner of The Lovely Hair Class, previously told Bustle. Once it’s up, use a curling iron for the flipped effect, set with hairspray, and you’re good to go.

You can’t talk ’90s hair and not mention hair accessories. Every hairstylist that Bustle spoke with insisted that no ’90s updo is complete without at least one playful hair accessory. Butterfly clips, decorative pins, pearl beads — it’s all fair game and so very ’90s.