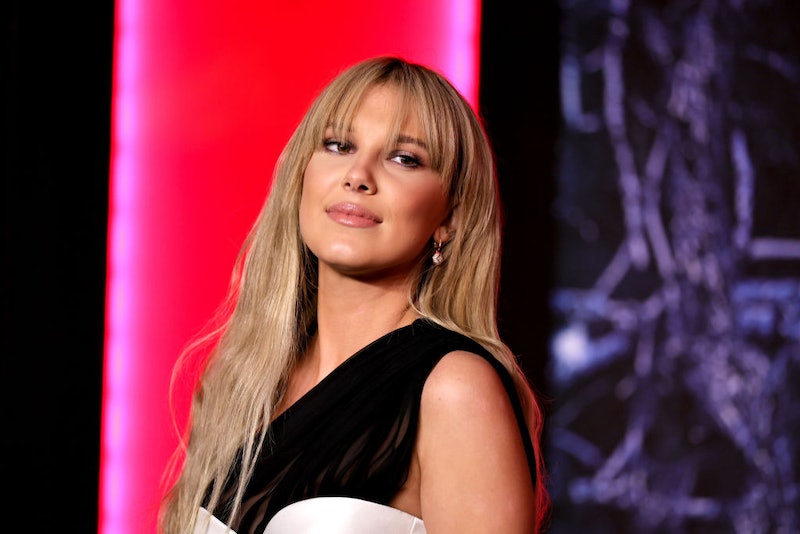 Stranger Things star Millie Bobby Brown is just the latest to be swept up in Y2K-era fandom — and with good reason. Some context: On Friday, May 13, Brown was a guest on The Tonight Show to promote Season 4 of her hit Netflix show which drops on May 27. What really piqued the Internet’s interest (and inspired this article) was that Brown had ditched her signature chocolate brown hair for blonde locks, which were pulled back into a sleek low ponytail, complete with an early 2000s-style baby part. The hair change along with her rosy-toned soft glam makeup and square-tipped pink nails made Twitter go into a tizzy thinking Brown suddenly looks exactly like Britney Spears circa 2001.

The next night, Brown and her Stranger Things castmates attended a glitzy Season 4 premiere event in Brooklyn, New York. This time, Brown’s waist-length blonde hair was worn down in subtle water waves along with a heavy bang. And, once again, the star’s makeup served early aughts realness: She was sporting metallic eyeshadow, black liner, and glossy pink lips. By this point, Brown’s resemblance to early 2000s-era pop princess Spears was uncanny — and Twitter could no longer handle it. Keep scrolling for some of the best Tweets about Brown’s glow-up, below... some of which are very spot-on.

More like this
The Best Beauty Looks From The 2022 BET Awards
By Audrey Noble
Kim Kardashian Chopped Her Platinum Hair Into A Lob
By Olivia Rose Ferreiro
Megan Fox’s New Makeover Is Giving Real Life Barbie
By Tomi Otekunrin
The $6 Drugstore Beauty Product Taraji P. Henson Uses Every Single Day
By Danielle Sinay
Get Even More From Bustle — Sign Up For The Newsletter