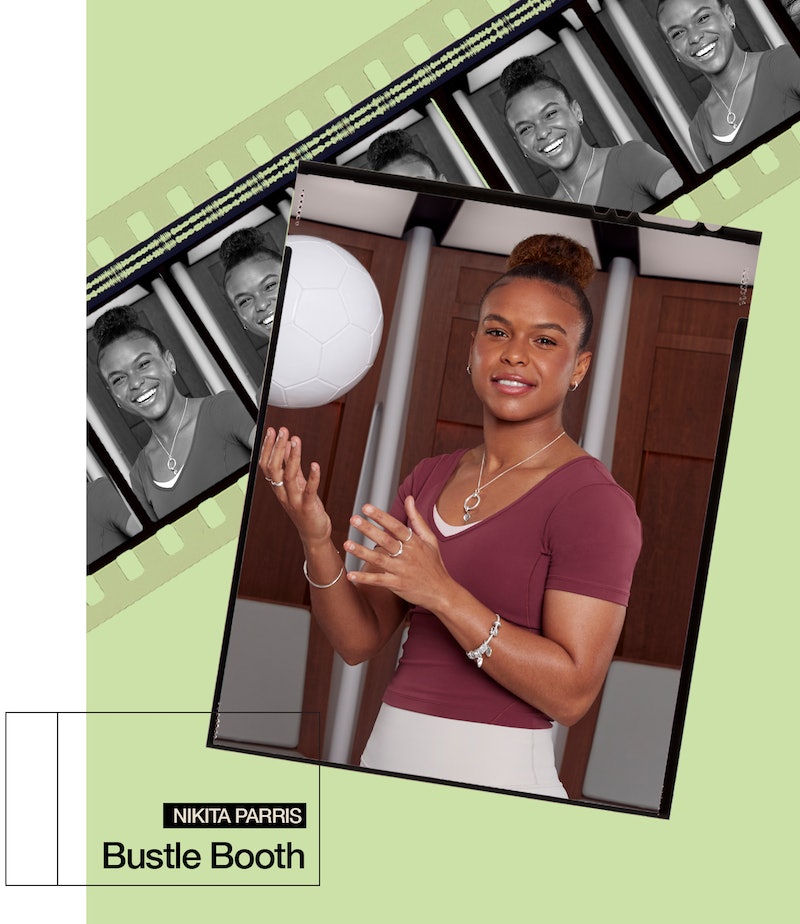 When Nikita Parris first joined Everton at 16 years old, walking out for kick-off meant being confronted with rows and rows of empty seats. “It was basically just a man and his dog,” she laughs. Back then, women’s teams would be lucky to get crowds of 200 punters for big, league-defining games.

Fortunately, thanks to a change in strategy from UEFA, a societal shift in attitude towards women’s sports, and tireless work from women in the game, things are looking up. Crowds at championship matches are now closer to the 2,000 mark and the World Cup games will exceed 20,000. But, as happy as Parris is with these numbers, she’s always willing to dream bigger. It’s kind of her thing.

“I’ll really know the game is moving forward when I walk out and every single seat is filled,” she tells me. “Then we'll get bigger stadiums and a greater atmosphere. We’ll have a better quality of game with a greater depth of players coming through because more girls want to play – and from a younger age.”

And she wants even more than that. “I’ll know the game is moving forward when it’s become something more than a game,” she says. “When it’s something that young girls can watch and see a future in.”

But while Parris always has her eye on the future, she’s also conscious of paying tribute to those who came before her. She names Fara Williams, Casey Stoney, Kelly Smith, and Faye White as just some of the many women who have inspired her, but her gratitude stretches back even further. The Arsenal forward feels lucky to play in the era she does, especially considering women were once banned from the pitch altogether. Parris knows it’s a privilege to get paid for doing the thing she loves and is so happy she can encourage young girls to do the same.

To continue with that mission, Parris has recently teamed up with Pandora, the official national jewellery sponsor of the 2022 EUROs. For International Women’s Day, Pandora and Parris – along with Houston Dash player Rachel Daly – have begun an eight-month campaign that aims to inspire women and young girls to go after what they want. It fits perfectly with Parris’ personal brand, with her one piece of advice for young players being “dream big”.

“It’s about dreaming and believing in that dream,” she tells me. “Don’t change your plan for anyone. A lot of girls can be discouraged from playing sports and they lose faith. But don’t question yourself. Even when the chips are down, you’ve got the resilience to bounce back from whatever.”

Get to know Parris in her Bustle Booth below.

I will admit, I am not a coffee drinker at all, it’s a substance that the taste buds can’t handle. I do like the social aspect of coffee, though – but my order is hot chocolate.

Liverpool (best city in the world :)), St Albans, where I currently live, and Jamaica, where I wish I could bottle up the good weather and bring it back to England all year round.

Pisces... I hope this question is meaning star sign, lol.

Favourite cartoon as a kid?

One movie or TV show you are currently obsessed with?

All or Nothing on Amazon Prime. I like watching the different dynamics and seeing what happens behind the walls of sporting organisations.

For me, Serena Williams is so inspirational, she has achieved so much throughout her career both on and off the pitch. She is one of the greatest tennis players of all time, if not the greatest.

After a lot of persuasion I would choose I’m A Celebrity because I feel this would be the most rewarding once I had completed it but definitely a very difficult challenge to overcome. I would be completely out of my comfort zone.

I think this song always seems to choose me: Tina Turner, “Proud Mary”.

What’s something that’s inspired you lately?

I have been inspired by the stories of my teammates both past and present and the journey’s in which they have embarked on through their careers and how the ups and downs they have been through have shaped who they are today. Recently, my friend Nadia Nadim released a book about her story; escaping conflict, training to become a doctor, and becoming a professional football player. Truly inspirational.

“For all her shortcomings, Nikita Parris fought tirelessly to create a world where people are not judged based on their differences, but instead celebrated for their diversity, providing a platform where change was embraced and not feared.”