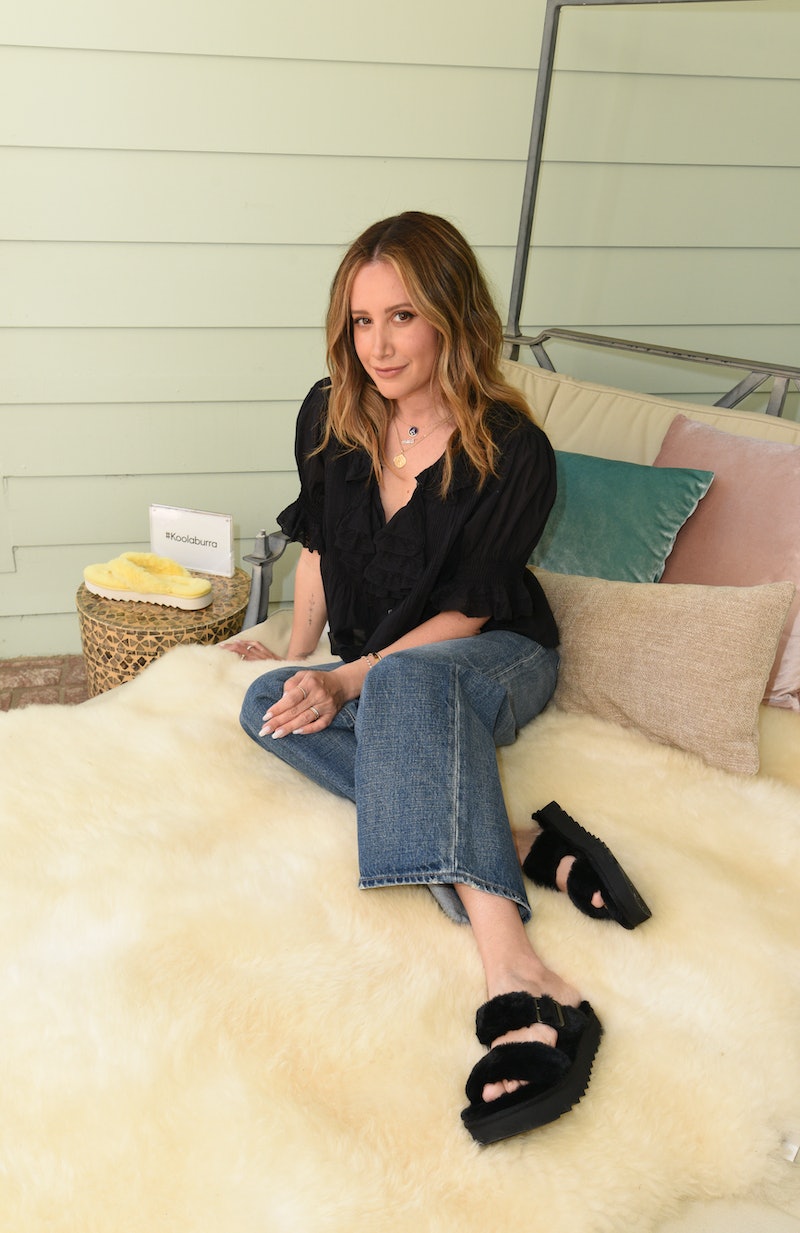 In 2019, Ashley Tisdale released her third album, Symptoms, after a decade-long musical hiatus. In contrast to the bright, highlighter-pink pop of her previous records, Symptoms dealt with far heavier concerns: namely, the actor and artist’s struggles with anxiety and depression. The album — full of physiological metaphors and instrumental swells — felt something like a capstone for Tisdale, or at least a definitive statement about her wellness journey.

“I’ve suffered from anxiety and depression in the past, and at that time there weren’t a lot of people talking openly about it,” Tisdale tells Bustle, now three years later. “It felt important to have those conversations, to make people feel less alone.” When COVID rendered the world unrecognizable less than a year after Symptoms’ release, she was poised to use her platform to help guide the growing number of people struggling with mental health.

“Wellness guide” might seem like a surprise turn to those more familiar with Tisdale’s tour de force performance in the late-aughts High School Musical trilogy — or, further back, her professional start as young Cosette in the touring cast of Les Misérables. “When I was younger, I wasn’t very aware of my anxiety or why I would feel certain things, [like my] heart fluttering when I was flying,” she says. “I was probably 25 or 26 when I started to realize I had this issue.”

“I was hyperventilating and had no idea what I was going through.”

When she became a mom last spring, it placed her journey in perspective, and earlier this year, she partnered with the organization On Our Sleeves, a program within Nationwide Children’s Hospital which helps parents talk with their kids about emotional wellbeing. “Obviously my anxiety started long before I was 20-something, but my parents might not have seen those signs,” says Tisdale, who’s 37.

Her favorite project to date, the wellness blog Frenshe, combines these passions. (It’s named for her married surname, French.) Since launching the site in 2020, it’s become a treasure trove of expert-backed resources and personal essays, in which Tisdale muses on her sex life, coping with loss, and learning from her mom. “I felt there was something I was meant to do besides acting,” says Tisdale, who’s simultaneously had a steady stream of acting and voiceover work on projects like Carol’s Second Act, Phinneas and Ferb, and Ginger Snaps. “Frenshe has allowed me to be very honest and real. I’m able to be who I am.”

Below, she opens up about managing her anxiety, HSM days, and that Architectural Digest home tour.

You did a lot of theater growing up. How did that shape you as a young person?

I love theater. Growing up, I loved music. I loved singing. I was commercial auditioning and then got to Les Misérables on the national tour, and it really helped me with discipline. When you’re a kid, having that type of schedule teaches you so much.

Did that translate to how you approached fashion? Now, 15 years later, people still talk about your red carpet style. Can you explain, in your own words, your 2000s style?

Completely confident. I started so young and very much did my own thing. I literally was just like, “I want to wear these shoes. I’m going to wear my whole closet on me.” I was so excited to be invited to those events, [but] over time they became more like work than fun events to go to. Those [outfits] represent a magical moment.

They feel very Sharpay in the best way. How do you think about your High School Musical days now?

It feels like a lifetime ago. As much as I love creating families with every cast I work with, there was something very special about that cast.

How did you navigate that early fame in terms of taking care of yourself and your mental health?

I definitely had a panic attack before a performance in Italy one time, and no one said, “You are having a panic attack.” I was hyperventilating and had no idea what I was going through. I read a book, The Presence Process, which opened Pandora's box [for me]. I was yearning to become more present and realized I had a lot of anxiety, so that was when I knew I had to face it and deal with it.

As a working mom, have you found ways to prioritize your mental health?

The baby is obviously my number one priority, but if I’m in a good place, [that’s the best way to] have her be in a good place. Over the course of the pandemic, I’ve created rituals I can do at home. Meditation is one of them. Even just opening a window and lighting a candle can really change the energy of the week. I love a good diffuser [with] lavender eucalyptus tea tree oil. Making my house smell like a spa is so nice and grounding.

Now I wake up a little earlier if I want to get my meditation done before I get the baby up. If I’m feeling drained and run down, communicating that to my husband [is helpful]. He’ll make a bath for me sometimes — he knows the things I love.

Do you have any tricks or practices for helping with anxiety?

I know how to manage my anxiety, [but] there are flare-ups, I recently went through one, feeling more anxious than usual. It’s great to take even 3 to 5 minutes to breathe, because that will bring you back into the present moment. I’ve always loved writing. What I love the most about it is that I have control over what I’m saying. Growing up in this business, you get scared to be honest in interviews sometimes. I like being able to tell my story [without it] being skewed in some weird way.

Can you pinpoint when you decided to talk more candidly about your mental health?

My husband inspired me to do self-work. He has done a lot of work on himself because of his sobriety, and it inspired me to learn more about myself. [With] Frenshe, I wanted to start sharing more. That’s always scary, and you never know how people are going to feel or think about it. So far, [people] have been so supportive.

Speaking of your husband, tell me about your Architectural Digest home tour! You admitted you’d sent him to buy a bookshelf-worth of books that morning, which the internet loved.

[Laughs.] I had no idea that [viral moment] was going to come from that, but it’s a perfect example. I mean, I’m just very honest. A lot of interior designers do that same thing, but the person giving the tour won’t mention it. But that’s just who I am. I thought it was really funny. It was a local bookstore. They were super stoked about the whole situation.

More like this
When Did Pilates Become So Popular Again?
By Elizabeth Narins
The Viral 'Little Miss' Franchise Is Focusing On Mental Health Next
By Darshita Goyal
Jiu Jitsu Champ Kim Blake Is Pushing For More Women In The Sport
By Kathleen Ferraro
How This Founder Inspired A New Wave Of Drinking
By Jordan Murray
Get Even More From Bustle — Sign Up For The Newsletter