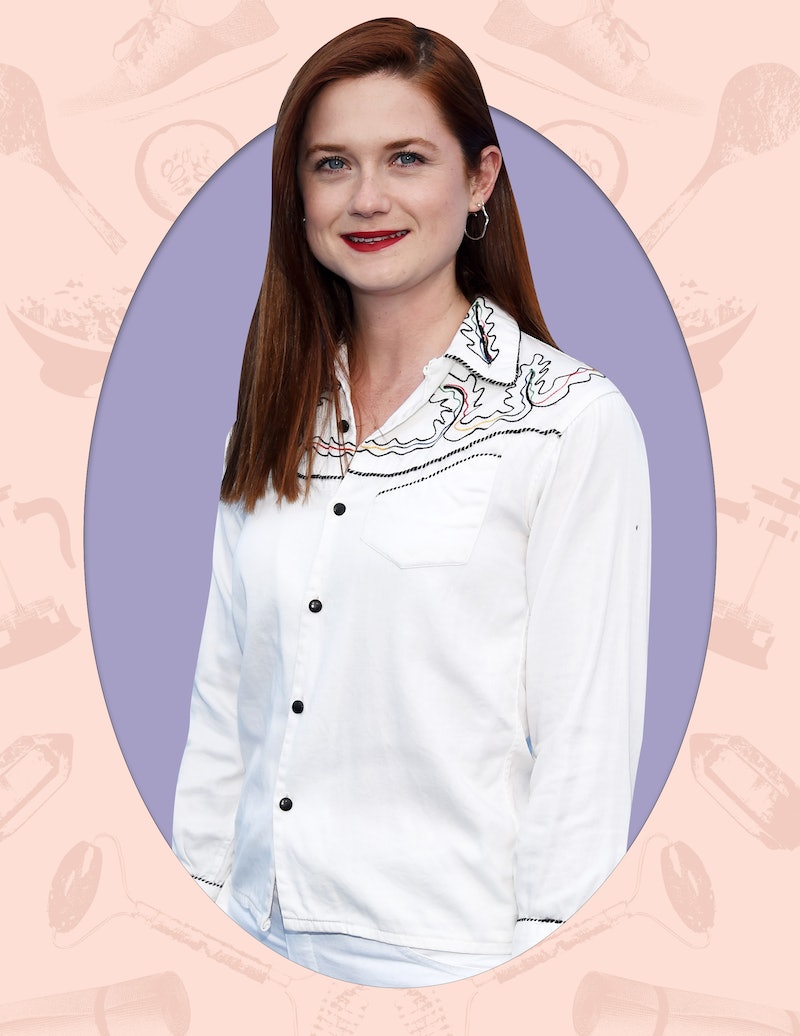 In Chill Chat, Bustle sits down with stars to chat about all things wellness, from their workout playlists to their most reliable self-care hacks. Here, Bonnie Wright shares her gentle approach to climate activism, unlearning habits, and her secret to a good night’s sleep.

Bonnie Wright was just a wee nine-year-old when she was first cast as Ginny Weasley in the Harry Potter franchise 20 years ago. And just has her acting career took off, so did her interest and dedication about learning about – and fighting to curb – the climate crisis. Now, she’s sharing her wealth of knowledge in her debut book, Go Gently: Actionable Steps To Nurture Yourself And The Planet, which she has been working on for two years. “If someone told me three years ago that I had a book coming out, I wouldn’t have believed them,” she tells me over Zoom from her home in San Diego. “So it’s nice that I kind of surprised myself.”

The London-born Wright graduated from the University of the Arts London in 2012 with a degree in filmmaking and later set up her own production company, BonBonLumiere. That same year she made her directorial debut with coming-of-age drama Separate We Come, Separate We Go, starring her Harry Potter co-star David Thewlis, which was released at the Cannes Film Festival. But during this time, Wright became increasingly involved with environmental activism, eventually becoming ambassador for Greenpeace in 2017. Ocean health and single-use plastics, capturing her attention first and foremost.

“My early concern came from a lifetime of seeing so much pollution ending up in the ocean and being so confused as to why it was there,” she tells me. “I was asking myself, are people littering this and why? What’s happening?”

A trip in 2018 turned that musing into a life-long dedication. Wright went to Coca-Cola’s HQ in Atlanta, Georgia, with Greenpeace, delivering a petition to urge them to end their single-use plastics. “It was really inspiring,” she recalls. “There’s a kind of camaraderie when campaigners and advocates come together, the kind that you can find lots of friends from, who all share the same feelings that inspires you. So it was that trip that made me come home with a long-term plan.”

Writing and publishing a book to help people take manageable steps towards meaningful change – whether that’s swapping shop-bought meals for home-made ones, or mending your clothes – is part of that plan. “I wanted to make sure that people realised that they don’t always have to be the person on the microphone screaming at a climate rally,” she explains. “They can be someone who is doing the work behind-the-scenes. They could be the organiser, the accountant, or someone making changes at home.”

The actor, who now lives in California with her husband, Andrew Riccoco, is merging her love for film and climate activism next. “I think people can do their activism in their own way, not by shaming or forcing others around you to do something,” Wright adds. “We want to lead by positive influence, but we should go gently. Change doesn’t happen overnight.”

Here, Wright shares her easy at-home sustainability swaps, how she felt about the Harry Potter reunion, and how she winds down after a long day.

I have to ask you, how was the Harry Potter reunion? Was it weird seeing everyone again?

Oh, it was so fun! It was surreal being back on the film set. First we were like, “Are we old enough to have a reunion?” But it was really nice catching up with everyone. It’s always such a relief to share and reflect on an experience that’s so often hard to describe to other people. I hadn’t seen Rupert [Grint] in a long time, I felt like I had seen my brothers [James and Oliver Phelps] loads. We’re all old people having babies now.

Back in the real world, what is your morning routine like?

I’m a morning person, so I usually wake up around 5 a.m., walk my dog, have breakfast, and be at my desk really early. I’ll also speak to my friends and family in London, where it is around lunchtime.

What do you do to de-stress?

I don’t have the energy for high intensity exercise, so I go for a walk – but with intention. That means leaving my phone at home, unless I’m doing a walking meditation.

How do you get a good night’s sleep?

I’ll watch a film or TV show – I just watched 1883, which is the prequel to Yellowstone, which I’m looking forward to next – and I’ll have a cup of herbal tea, and a chocolate. And I’ll always walk my dog before bed, too.

What’s the easiest sustainability changes you’ve made at home?

Composting my food scraps and organic waste, rather than throwing it in the bin. And washing my clothes with detergent not wrapped in single-use plastics. Both so simple.

Some habits are hard to shake, don’t you think?

Unlearning convenience definitely isn’t easy. Convenience habits are difficult because consumerism is everywhere and it’s so easy to buy more. Having to unlearn that helps us make better choices and decisions. Slowing down the decision-making process, basically.

Letting my book have its own journey. Then in the summer, I need to have some rest. I want to travel and have my horizons expanded, in whatever direction that may be.

Go Gently: Actionable Steps to Nurture Yourself and the Planet is out now. This interview has been edited and condensed for clarity.