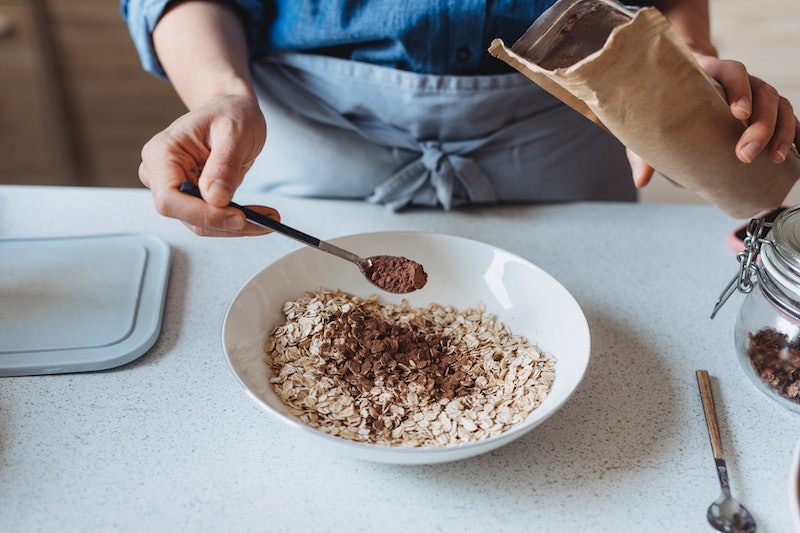 If you’ve used no other seasonal spice this season, you’ve probably used cinnamon. And with good reason — it’s got just the right smell and just the right taste, warming everything from your pumpkin pies & spiced lattes to your heart. The spice has even more than that, though: Cinnamon has a load of health benefits that are sure to entice you to use it even more than you already do.

“Whether taken in the form of its pure bark, essential oils, powder, or as a supplement, cinnamon is antioxidant, anti-inflammatory, anti-microbial, immunity-boosting and has potential cancer and heart disease-protecting abilities,” says certified holistic nutrition consultant and founder of Gut of Integrity Stephanie Papadakis.

The spice is derived from the bark of Cinnamomum verum trees. Cinnamon farmers first strip the outer layer of bark, and then the inner layer. The inner layer is the cinnamon one, which is what those curled, solid cinnamon sticks are from. But stick or powder, the health benefits of cinnamon remain the same.

Cinnamon Is Good For Your Blood Sugar

Even a little bit of cinnamon can go a long way toward helping improve the blood sugar levels of people with diabetes, Papadakis tells Bustle. The spice “has the ability to lower blood sugar levels and improve sensitivity to the hormone insulin, which helps keep blood sugar levels balanced,” she says. This is because cinnamon “can help block the activity of several digestive enzymes to slow the absorption of sugar in the bloodstream,” which can impact people’s blood sugar markers.

Cinnamon Does *Not* Speed Up Metabolism

There are also other fun health benefits of the spice, Papadakis says. A natural breath freshener, some cinnamon might be great if you’re heading into a consensual mistletoe situation with your roommate (and they were roommates!) this holiday season. And if the dry winter weather and your mom’s cooking are wreaking havoc on your skin, Papadakis tells Bustle that the antibacterial and antimicrobial properties of cinnamon can help protect your skin from all kinds of irritation, including rashes, allergic reactions, and infection.

How To Sprinkle Cinnamon Into Your Life

Papadakis suggests sprinkling it into almost everything: your oatmeal, coffee or tea, baked goods, and trail mix all benefit from the earthy goodness that is cinnamon. Though cinnamon has many health benefits, just make sure you avoid eating the spice right from a bottle or spoon — the so-called “cinnamon challenge” (and perhaps a certain level of personal experience) has taught people the dangers of just chugging the spice straight. But if you’re sprinkling rather than kicking it back, cinnamon can do great things for you.

Costello, RB. (2016) Do cinnamon supplements have a role in glycemic control in type 2 diabetes? A narrative review. Journal of the Academy of Nutrition and Dietetics, https://www.ncbi.nlm.nih.gov/pubmed/27618575.

This article was originally published on Dec. 18, 2019