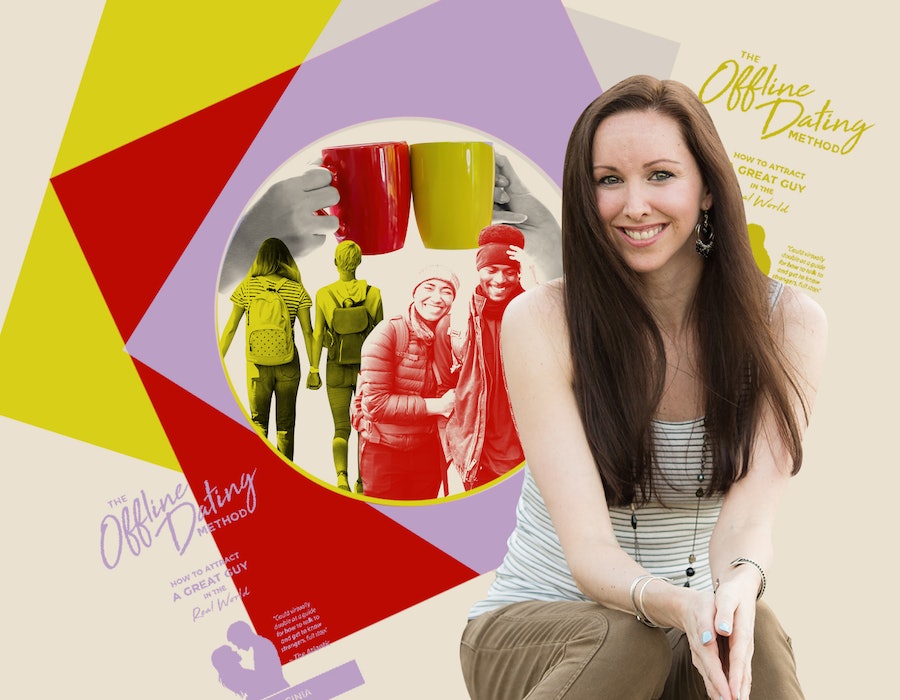 When Camille Virginia moved to Chicago to be in the same city as her boyfriend years ago, things didn’t quite go as planned. “He broke up with me within a few weeks, and I had no friends [there],” she tells Bustle. Left with a choice between moving back home or putting down roots on her own, she decided to resist her introverted nature and attempt to meet people the old-fashioned way — in coffee shops, at parties, and just walking down the street.

Her friends were curious: how was Virginia, who grew up with social anxiety, making all of these organic connections with people? “I made a powerpoint to send them with a few ways to chat up strangers,” she says. Years later, those slides became The Offline Dating Method. The original book, published in 2019, was geared towards women interested in meeting men, but as Ashley Fetters pointed out in The Atlantic, its tips were general enough that it “could virtually double as a guide for how to talk to and get to know strangers, full stop.”

Shortly after its release, however, along came lockdown, putting an end to the kinds of spontaneous, stranger-based interactions from which the book draws its ethos. With the exception of Zoom dates and strained, distanced park hangs, we stopped meeting new people. As a result, we got even more lonely.

“It's hard because COVID is acute,” Virginia says, but “loneliness is chronic. You feel it deeply. It's ever-present, and it gets worse and worse. One study said that loneliness is like the equivalent of smoking 15 cigarettes a day.”

But now, with vaccines widely available the potential for casual encounters to become magical meet-cutes has been restored. The only problem? After a year off, our social skills have gone rusty. As if dating wasn’t nerve-racking enough before,51% of singles are currently experiencing FODA or “fear of dating again” following last year’s lockdown, reports a 2021 Hinge survey of 2,000 global users

If you’re feeling hesitant about getting back out there, here Virginia offers her best tips for radiating magnetic approachability and meeting people IRL.

The 2010s were kind of defined by the normalization of dating apps, but now some millennials have been on them since college, and they’re tired of it. They download them for two months, they get sick of them, they go off, and it's just that burnout cycle over and over again. How do you think app fatigue is going to play out in the next few years?

What's interesting, as you were talking, I started thinking about fad diets. People like silver bullets right? They want the one thing that's going to make them lose the weight, or meet the person, and they just want to be done with it. But unfortunately, both weight loss and the journey of finding your future partner take time — and that’s why they’re harder. You’ve got to screen for the right person, make sure that you're on the same page. With weight loss, if you dropped 30 pounds in two weeks, you're just going to gain that right back.

[Dating apps] feel like a flavor of the month situation, which is why I've doubled down on offline meeting, because human connection, especially in person, will never go out of style.

After a year of reduced dating, or being too nervous to even think about it, how can people push past that initial fear of putting themselves out there, being vulnerable, and going on dates again?

I think it's actually a great opportunity to have those tougher conversations, and set those boundaries. That can be hard. It's something I struggled with in dating. I wanted to come across as, “Oh, I'm super casual and easy. I'm not one of those high maintenance people.” And now it's just kind of owning that. We all need to be a little high maintenance and set those boundaries for our own safety.

So yeah, define what your comfort zone is and then date within those parameters. Maybe you need to check someone's vaccination card when you meet up, and make sure that they have their ID. And if the person refuses, then you know that you’re not on the same page on the fundamentals, so that's not going to work anyway.

Do you think people are approaching dating differently this fall? Should we expect a cuffing season as usual?

It's a good question. I would say cuffing season has just kind of been extended with COVID right now. We don’t know how long it's going to go on. So it could go either way. People could be freaking out and saying, "I don't want to go through what I did last the 18 months being alone. I’ve got to find someone." Then you're either going to make a hasty pick, and it could be the wrong person, or you may serendipitously find the right person.

What are the most effective ways for people to go out and make new connections this fall?

Go outside and do things if you can. Bundle up, go to the dog park, get some coffee to go, go to the grocery store, and just be around people. A lot of businesses and organizations got really creative during COVID and pivoted a little bit so that people could still safely interact with each other. Go looking for those.

Do you have any specific tips for finding that stuff? Let's say I live in Louisville, Kentucky, and I'm into hiking, but I don't have a group that I go with regularly.

Yeah. I went through this when I moved. I posted on Facebook, “I'm moving to Chicago, I'm in the city. Does anyone know anyone?” Someone [will]. And if you meet a local there, or somebody who's been there longer than you, they’ve already gone through that process, and have other people that you can meet. I would say start there, and then Google outdoor activities, hiking groups, meetup.com, Eventbrites.

Talk to your neighbors if you live in an apartment complex. Maybe leave a note on their doors introducing yourself to see who is open to connecting or going on a hike.

You mentioned that some of your clients reached out to you last year about forging new platonic relationships. What’s the difference between making friendship connections and making romantic connections offline?

It's actually the same process. If someone catches your eye and something is pulling you towards them, you don't have enough information to know who that person's going to be in your life. They could be your new friend, a new client, or someone you kind of click with, and three months later they invite you to a party where you end up meeting your future spouse. All I know [in that moment] is, I want to talk to that person, and I'm going to go find a way to do it.

If there's a little flirtation, all right, well, they find me attractive too, and I'm romantically interested. Or it starts out as a friendship, and then in a few months blossoms into a romantic connection. So it's taken that pressure off, this has to be a friendship interaction, and this has to be a romantic interaction. It's really just the same.

Let's say you find yourself in a romantic relationship this fall, and you're thinking about locking it down. What are some ways people can assess, is this a good match for me? Or did I rush into something because I didn't want to go through winter 2020 all over again?

My way to identify your perfect partner is through values, and I've learned this the hard way, because I've dated men who were good in many ways, and we had fun, but our values didn't align. We defined honesty differently. One of them thought it was OK to talk to ex-girlfriends behind my back, and I did not think that that was honest. So that kind of stuff is not going to work because every little bump in the road gets magnified when you're not on the same page with your values.

Just a simple, “How do you define honesty?” can be asked on the first date. I wish I had known to start those conversations earlier in a lot of relationships. It's not grilling someone, but it's really getting into why they define their values that way. Have you had someone be dishonest with you? How did that feel? What did that look like? And you can do that with all your core values — respect, responsibility, empathy, kindness, compassion. It's a great way to really get to know someone quickly, but also make sure that you guys are on the same page on the basics.

One of the major limitations of apps, in my opinion, is that you end up looking for these signals of commonality. Oh, we both like this band. You end up basing connection on keywords instead of chemistry or value-based judgments.

That's a great point. It's kind of a way to feel in control in the process, right? Well, I like pizza, so if they like pizza, they must be like me in other ways too. It's a safety thing, and it creates this false sense of identity for the other person. You don't know anything else, just that they have the same similar taste buds to you.

You describe yourself as being socially anxious and introverted. How did you push past that and what are your tips for others looking to do the same?

I just got tired of being lonely and feeling like I missed the memo on how to make friends. I’d kind of felt that way since high school, and I really found my social circle in college. But I had to be intentional. I mean, it’s like I told my clients (pre-COVID). "Well, do you expect a guy to knock on your door? You're going to meet zero people if you don’t go out." So you’ve got to take that first step. Define what your comfort zone is, and then push past it just a little bit, and get some momentum. Just don't take a bigger bite that you can chew.

Camille Virginia is a dating coach and author of The Offline Dating Method.