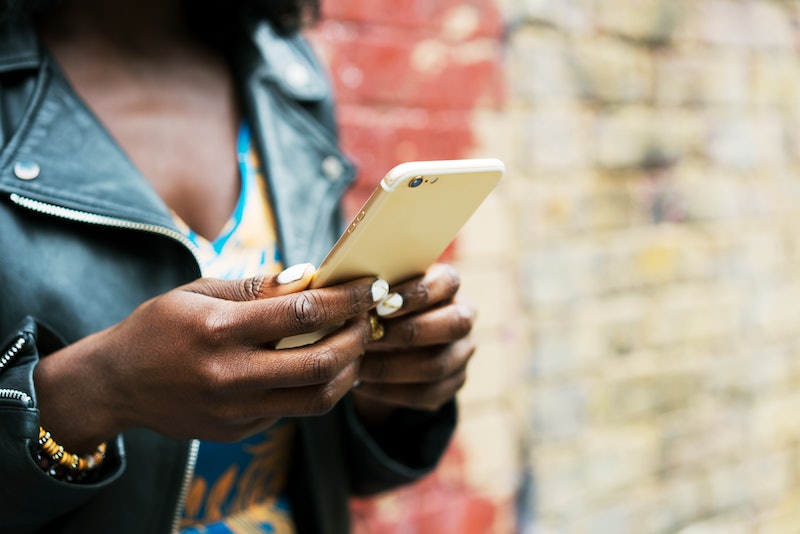 Ten years after Instagram first launched, allowing users to engage in each others’ lives through pictures, the platform boasts around a billion active users — and a reputation for cratering a generation’s self-esteem. At first, studies seemed to suggest that scrolling through curated images of impossibly fit wellness influencers and highlights from your college nemesis’ engagement actively harms your mental health. Instagram, along with other social platforms, is linked to higher rates of depression and anxiety, as well as loneliness, bullying, body image issues, and sleep quality. But experts say this doesn’t illustrate Instagram’s full impact on mental health.

“There is a common saying in this line of research now,” Adrian Meier, PhD, an assistant professor of communications at the University of Amsterdam in the Netherlands, tells Bustle, citing psychologist Amy Orben, PhD. “Not all screen-time is created equal.”

Current academic research on social media assumes that passively consuming social media is bad for your mental health because it invites social comparison. “[W]hen you look at someone’s amazing holiday pictures, for instance, this is supposed to make you feel worse about yourself because you compare upwards unfavorably and envy what the other person has,” he tells Bustle.

But this research doesn’t tell the whole story, he says. For one, many of these studies are correlational, “meaning they did not clearly identify any causes of changes in well-being.” For another, they often don’t check whether there could be a benefit from passively scrolling through the feed.

"The effects on well-being depend on what you see and how you react to it."

Meier is interested in these potential benefits. In designing a study on passive scrolling that was published in 2018, he looked to incorporate research suggesting that there are two forms of envy: one that makes you feel straight-up bad, and another that motivates you to seek out what you’re feeling envious of. The study of 385 people found that even when they were scrolling passively, users felt inspired by posts that engendered the latter feeling. “When feeling more inspired, participants also reported higher well-being,” he adds.

While it’s true that Instagram can inspire feelings of “compare and despair,” it’s also a place for people to explore who they are and the role they want to play in the world, Melanie Green, PhD, a social psychologist and professor of communication at the University of Buffalo, tells Bustle. “Social media sites like Instagram provide a valuable platform for self-expression and for connecting with others,” Green says. “If people are using the sites to express their own identity, maintain connections with friends, and develop connections with others who share important values or identities, then it can contribute to their well-being.”

It’s for this same reason, however, that Instagram can aggravate negative feelings someone might have about themselves — or invite bullying. Nearly 60% of teens report having been bullied on social media, according to the Pew Research Center. Over the years, the app has worked to combat cyberbullying by introducing AI that scans texts and photos for community guideline violations, which are then manually reviewed, or tools that let users block comments to combat trolling — without notifying the person being blocked, thereby de-escalating a bullying dynamic.

The harm done by cyberbullying is very real, but it’s an example of how people using the app can cause damage, rather than a problem intrinsic to the platform. Even though there is plenty of harmful content on Instagram, Meier says that “the effects on well-being depend on what you see and how you react to it.”

Jenny Korn, the founding coordinator of the Race, Technology, and Media Working Group at the Berkman Klein Center for Internet and Society at Harvard University, explains that Instagram users, especially ones from minoritized groups, are quite savvy about reacting to posts to foster belonging and community, rather than compare and despair. “‘One of us’ affirmations [on social media] as non-binary, queer, of color, with disabilities, or marginalized [communities] ... have a positive digital health effect of reminding astute individuals from historically marginalized groups that we are not alone, digitally or globally.”

There’s no better example of this than how Instagram has been critical for the Black Lives Matter movement, says Allissa Richardson, PhD, an assistant professor of journalism at the University of Southern California. “When Instagram Stories debuted a few years ago, African Americans could live stream their protests to a more select audience of their close friends. It brought a lot of the intimacy of Snapchat over to the Instagram platform,” Richardson says, facilitating a critical sense of community. She also points to how the Carousel feature helped disseminate infographics and resources about dismantling white supremacy over the past summer. “Instagram has truly grown as a place where people can share information about the Black Lives Matter movement and document their activism in real time,” she says, letting users feel engaged in a time when so many were feeling silenced. This form of information-sharing, she says, is critical to the mental and physical health of Black Americans.

When we talk about Instagram, it’s essential to move away from Social Dilemma-style fearmongering, and towards amplifying the role the app plays for people trying to record, and change, the times we live in. “I would like people to think of Instagram as a place to do more than share selfies or stories,” says Richardson. “It can be a place where we mourn collectively, organize effectively, and document progress.”

More like this
19 Latinx Therapists & Mental Health Experts To Follow On Instagram
By Kaitlyn Wylde, Naydeline Mejia and Lexi Inks
Hinge Added A Video Prompt Feature, So Get Your Camera Rolling
By Hannah Orenstein
Why Everyone Is "Soft Tagging" Friends On Instagram Right Now
By Alexis Morillo
How To Use Hobnob To Host Your Next Party
By Emma Carey
Get Even More From Bustle — Sign Up For The Newsletter