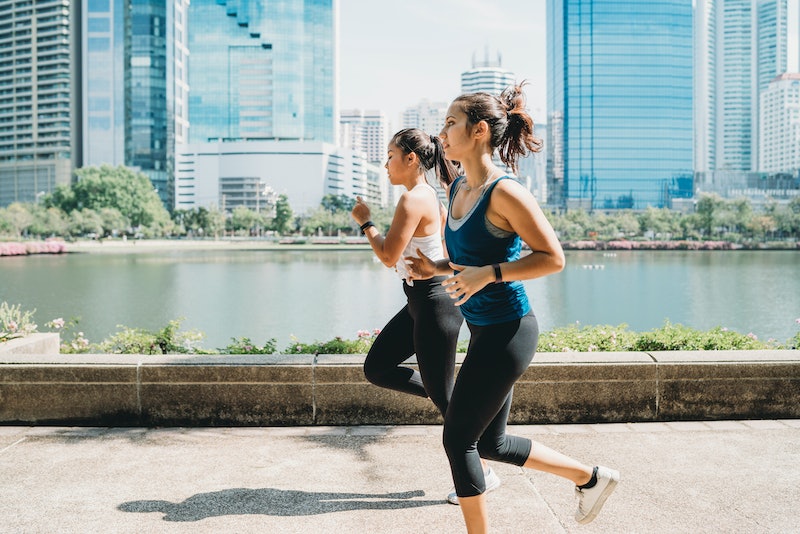 When you lace up your sneakers and set off down the street for a cardio workout, would you say you are going for a jog or a run? While both forms of exercise look pretty identical to the naked eye, there are a few things that set running and jogging apart.

To start with the most obvious, the main difference between running and jogging is speed, says Brian Muldowney, MS, a USAT-certified level I coach. “Running is moving at a pace that is moderate to high in intensity,” he tells Bustle. While it depends on the individual, that could be as quick as six minutes per mile, or it could be slower and based on your perceived exertion.

Your form also comes into play. “Running engages more of the upper body in the swinging of the arms,” Muldowney says, compared to a slower jog where the arms tend to remain at your sides. There’s also a difference in stride length, notes Josh Honore, NASM-CPT, a trainer and coach for Stride Fitness. “Stride length can nearly double with running versus jogging,” he tells Bustle. “This form difference also affects foot strike.” When running, less of your foot tends to contact the ground with each step, Honore says. Your foot also tends to strike closer to your toes during a run, compared to a jog that rolls more through your mid-foot.

Running focuses a lot of attention on form and pace, which is why jogging can seem a lot more casual in comparison. The latter is when you move faster than a walk at a low to medium pace but not so fast that you get out of breath, Muldowney says. While jogging is technically very similar to running, it often comes with a different mindset, too, says Alan Ladd, a running coach and founder of The Running Rules. It’s slower, less structured, and less goal-oriented — as in, you may not be gearing up for race day — but both still count as amazing forms of exercise. Read on for more on the differences between running versus jogging.

The Benefits Of Running

Whether you’re months into training for a race or out running for the first time with a couch to 5K program, Ladd says all running counts as good exercise, and it boosts your overall health. “It improves cardiovascular health by exercising the heart, which itself is a muscle,” he says. “And running is also known to improve mental health.” Go for a swift shuffle down the street, and you might even get a runner’s high.

Take your jogging speed up a few notches into a run and you can expect to strengthen the muscles of your lower body and improve your endurance, Muldowney adds. “It is similar to strength training, where you gradually improve strength and endurance by increasing resistance through physical exercise,” he says.

The impact of a run can also help you build stronger bones and joints, and that’s important as you get older. “Running is a weight-bearing exercise, much like a high-intensity exercise, which promotes healthy bone mineral density and stimulates bone growth,” Honore explains. “Along with that, we’re always hearing talk of running being hard on your joints. Many studies have shown that hip and knee arthritis, and other issues, tend to be more dependent on family and surgical history, as well as age, more so than too much ‘pounding the pavement.’”

If you’re already fully into running and want to make the most of it, Ladd suggests setting a goal to keep yourself focused, whether that means improving your pace, increasing how far you run, etc. “Runs should also be varied in length and pace during the week to make quicker progress,” he says. “Following a plan is a great way to ensure you progress at a good rate.”

The Benefits Of Jogging

Jogging offers all the same benefits as running, but it has its own factors that make it appealing. According to Muldowney, it’s a super versatile form of exercise that you can use as a warm-up, as your main workout, as a cool down, and as a form of movement on active recovery days.

Again, casualness is key. “Most people think of a jog as slower and/or less serious than a run,” Ladd says, and that’s why jogs tend to appeal to folks who are looking to maintain a general level of fitness without worrying about being “good” at running. You can simply lace up your shoes, turn on a Spotify playlist, and see where your feet take you.

That said, a slower jog does have a place even for those with race day aspirations on the horizon, as it adds levels and variation to a training routine. “Jogging is needed to recover from running and to build endurance,” Muldowney says. “In between running intensity drills, it serves as a form of recovery.”

To fully live your best jogging life, go easy. “Keep your jog relaxed and enjoyable,” Ladd says. “If this means interspersing it with a walk, then go for it. A lot of beginners run too hard and many stop because it isn’t enjoyable.” Keep your jog casual and fun, and you’ll be way more likely to stick with it — and maybe even build up to “runner status” in the future.