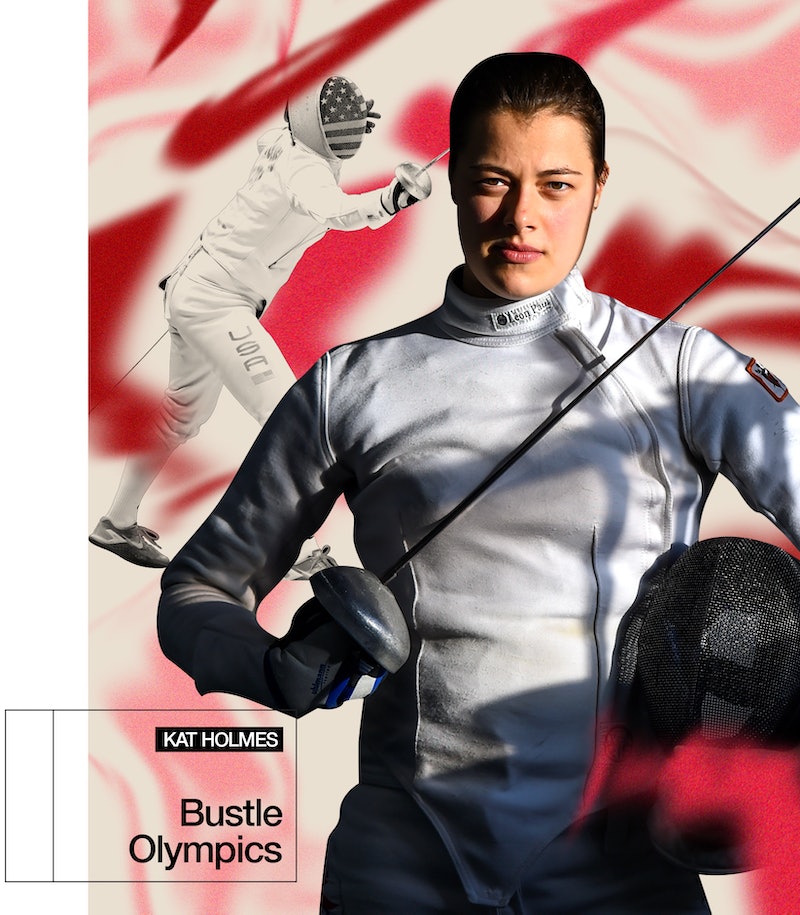 By July 27, champion epee fencer Kat Holmes will have finished competing in the 2021 Olympics, just four days after they begin. But when I ask how she’s planning to celebrate herself after the summer games, Holmes laughs: She’s going to unwind for a few days in Hawaii — and then start medical school in August.

Holmes, 27, has been fencing since she was a pre-teen growing up in Washington, D.C. Tokyo will be her second Olympic Games, after Rio in 2016. She’s the fencing team’s anchor, which means she’s responsible for protecting her team’s lead, making up lost points, and being excellent under pressure. She sees her future career as an extension of this role: “I’ve spent so much time with sports [medicine] docs and orthopedic surgeons, and I want to help that next generation of athletes come up,” she tells Bustle. When she’s not competing or prepping for med school, she’s typically training — with some help from her cat, Trainer Tiger. “He’s constantly encouraging me to reach his level of purrfection,” she says, laughing.

With the Olympics (and her med school start) inching closer, Holmes has some advice about staying graceful when things aren't going your way.

I say Olympics. What’s the first word you think?

As you’re getting ready to take home your gold, what does your training schedule look like?

I’ve changed how I train 11 times over the past year during COVID. I was in Budapest, Hungary, getting ready to compete for the last Olympic qualifier in March 2020 when Trump announced the travel ban. My teammates were staying in an Airbnb, and we got a call saying, “You have to get back to the States.” It sounded like if we didn’t get back within 48 hours, we were going to have to swim across the Atlantic Ocean.

For months, I was lifting in my living room and taking lifting lessons in my coach’s basement. I’m immensely grateful to my coach for welcoming me into his home for so many months, but a piece of my soul died in that basement. It was about as wide as my arm span, and the ceiling had those little foam tiles they have in elementary school ceilings — they kept raining down on me.

I also started working with virtual trainer fitness app Future. With that, you can make a kickass workout, no matter where you are. So I used this year to become a better athlete all around.

Is there an exercise that you still find so hard and you need Trainer Tiger’s help?

There’s this one exercise that I do called pillbug rolls, where you’ll hang gymnastics rings from the ceiling. You curl your body up into a little ball and pull yourself up. When those rings come out, Trainer Tiger is on my chest, adding an extra 10 pounds to make sure that I’m doing it perfectly.

How do you push through hard exercises or hard days?

It’s really about self-talk. For a while, my goal was to bench 135 pounds. I was frustrated that I kept missing it. But instead of thinking, “I’m never gonna get there,” I tried to think, “I did more than I could last time.” I try to ask myself how I can turn the sentiment around when I feel uninspired. So instead of, “What’s the point?” it’s like, “Alright, we got this rep, we’ll get stronger now.”

Besides self-talk, how do you get pumped before you compete?

I have a high level of adrenaline when I compete. I used to listen to pump-up music like rap or something super intense. But more recently, I’ve actually been listening to a lot of country music, like Rascal Flatts and Kenny Chesney, that’s lighter and upbeat and can clear my mind.

What about your post-match recovery?

First, I eat. Right now, I’m on a Special K kick — I love all the Special Ks, but the kind with blueberries is my go-to right after my stretch and foam rolling routine. Before I go to bed, I take my lacrosse ball and use it against the wall on my sore spots. I always take an active recovery day off to hike, canoe, or rock climb. I meditate, because you also have to recover the mind.

Do you have a favorite stretch?

I love lower back stretches. First I cross my left leg over my right, in the Bretzel variation where you have your knees in that position and then let them fall over the opposite side. I love a good lower back pop — that is heaven.

Last thing: Is there a common piece of fitness advice that you think is BS?

Any type of hack where it’s like, “get abs in 30 days.” Fitness is a lifestyle. You do fitness because it’s good for your body and your mind. Try to be the best you can be, and then you’ll get where you want to go.