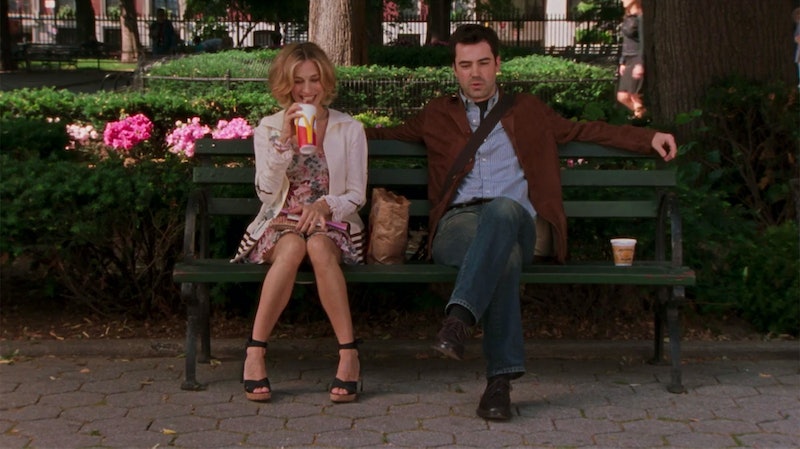 When it comes to the two great loves of Carrie Bradshaw’s life, it’s an undisputed fact that they are Aidan and Mr. Big — the show explicitly tells us as much. But on her way to meeting each of them, Sex and the City viewers had the opportunity to watch as Carrie flirted and flitted around with men who often felt more like archetypes than characters. They represented guys about whom women everywhere could say, “Oh, I went out with him once,” or “I had an ex just like that.” This, of course, often applied to the men Charlotte, Samantha, and Miranda dated as well. (We all have a Steve-shaped skeleton in our closet.)

Somehow, by the show’s last few seasons, I was able to convince my mom to let me watch Sex and the City as it aired, meaning I hadn’t even been bat mitzvah’d by the time I’d heard Samantha make her first sexual pun. And even though I was at an age where I should have been rooting for Carrie to reach her so-called Happily Ever After with Big or Aidan, neither of these Sex and the City mainstays really appealed to me — none of her boyfriends did — until, that is, she met Jack Berger (Ron Livingston).

The meet-cute Carrie has with Berger in her editor’s office felt, to me, like a ray of sunshine breaking through the dark clouds that were her love life. Of course Carrie should be dating a writer! It was so obvious. She and Aidan were never really on the same page, and Big was some stuffy real estate guy who never seemed all that invested in Carrie’s career. Berger felt like a happy medium, someone down-to-earth and creative like Aidan, but to whom Carrie could relate more. As she herself put it, “I sparked with this person. I never spark.” (Yes, Carrie does date a writer played by Justin Theroux in an earlier season, and while he is obviously cute, funny, and gets Carrie, his Oedipus complex proves insurmountable.)

But what’s more than how Carrie felt about Berger is how I felt about Berger. To use some now-popular internet slang, Berger had me in a chokehold ever since he made his very first self-deprecating comment. I already wanted to be a writer when I grew up, and Berger was exactly the kind of guy I wanted to date when I finally made that happen — someone sharp, who could match me, who spoke the same language I did, as Berger could with Carrie. I recognized that I was probably 10 to 15 years out from a relationship that resembled this, as I was still extremely busy with my middle school chorus, but I was ready.

When Berger unceremoniously dumps Carrie via a Post-it note, it’s treated by everyone as completely outlandish — the NYPD included, who first bust Carrie for smoking weed and then let her off with a more minor transgression after seeing Berger’s breakup note. I filed this away in my mind as a silly Sex and the City plot line, and held steadfast to my dreams of dating a Berger some day — or, let’s be real, multiple Bergers.

Cut to many years — and my own romantic go-rounds with Berger-like writers and comedians — later. I, like so many others, decided to re-watch Sex and the City during the pandemic. And, to borrow yet another popular internet phrase, this time, the Berger arc hit different.

Viewing the show now, I realized that Berger is Carrie’s only boyfriend who isn’t significantly wealthier than her. Mr. Big is private-driver rich, Aidan does well selling artisanal furniture, and the Russian lives in some sort of TriBeCa fortress. For much of the show, Carrie is batting above her weight, living in a world that she seemingly belongs in but can’t financially afford. With Berger, the tables have turned: Carrie gets an all-too brief taste of what it’s like to enjoy the fruits of her labor, to be the one who can treat her partner to an expensive gift from Prada.

When Carrie first meets Berger, the two are seemingly equals. However, over the course of their courtship, her star rises as his begins to crest. Even Carrie’s smallest criticisms of his work send Berger into a passive aggressive tailspin; instead of relishing her success, he resents it. She gets a gigantic $25,000 check from Paris, while the option for Berger’s second book is dropped. His inability to be happy for her forces Carrie to minimize this career landmark and prevents her from basking in its joy. When Carrie finally confronts Berger about his behavior, she tells him, in so many words, that she didn’t think he was that guy — but the thing is, he didn’t think he would be, either.

Watching this as an adult who has dated both inside her profession and outside it, I can say that Berger’s arc on Sex and the City perfectly encapsulates what it’s like to be with someone who has the same creative drive as you do. The lure of it is basically impossible to resist: Spending time with someone who understands your professional pitfalls in a way others don’t, who can push you to be better, and who ultimately sees the world the way you do is a rush that’s hard to top.

But, in my heterosexual dating experience (and Carrie’s), when the man isn’t the more successful partner, things turn sour. I’ve had exes say things like they “feel inadequate when they can’t help but compare” our respective careers, and men admit to feeling like my drive is a motivational tool for them — as if my career is a goalpost. I’ve found myself more often than not hiding details of my professional life so as to not seem too successful, yet I also worry about not seeming successful enough to be taken seriously, a modern literary Goldilocks.

While Berger’s method of breaking up with Carrie — the infamous Post-it note — is cruel, it tracks with the way he continuously prioritized his own safety and comfort over Carrie’s feelings. He resisted having a hard conversation when they first met, failing to disclose the little fact that he had a girlfriend, and once again refuses to put on his big-boy, we-need-to-talk pants when it’s time to end the relationship.

Although this type of breakup is — as the NYPD officer puts it, “brutal” — for guys like Berger who are intimidated by a partner with more professional clout than them, ghosting is always the most likely outcome.

More like this
Are Quality Time & Gift-Receiving Love Languages Compatible?
By Lexi Inks
How To Set Rules If You're In An Open Relationship
By Lexi Inks
10 Creative Sexting Ideas That Don't Involve Nudes
By Lexi Inks
The 19 Best Tweets & Memes About Bisexual Awareness Week
By Lexi Inks
Get Even More From Bustle — Sign Up For The Newsletter