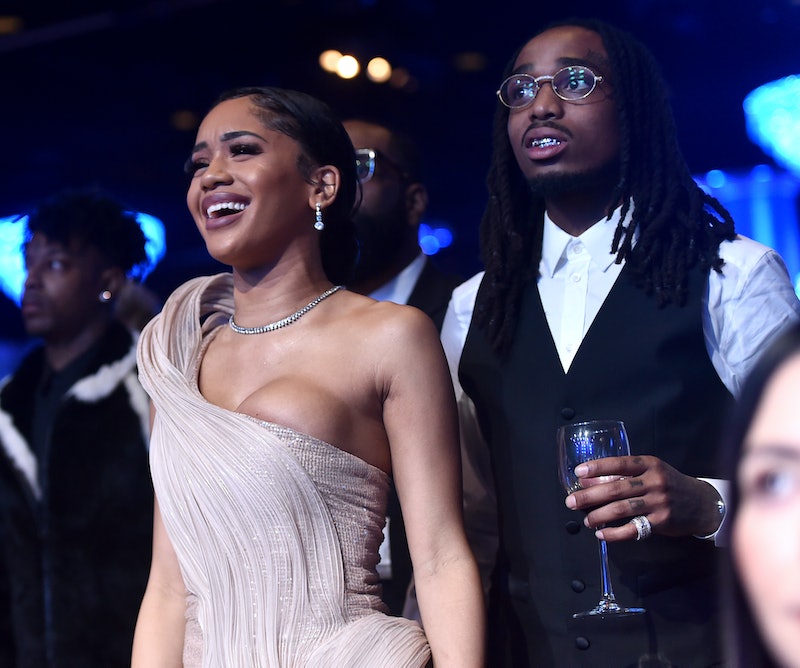 At this point, everyone and their mother knows about the eggplant emoji, and its particularly raunchy implications when paired with a peach (is that you, Timothée?), mouth, or sweat droplet emoji. When it comes to flirting using tiny pictures, these combos make sense. But there's a new emoji combo in town: People are DMing noodles and snowflake emojis to each other, and it's decidedly more difficult to decipher than a long, cylindrical, and slightly curved vegetable next to a pair of lips.

So here's the backstory. According to ET, it all started when Migos rapper Quavo tweeted about his relationship with girlfriend, Saweetie, and revealed how he first reached out to her back in 2018. Apparently, he sent a snowflake emoji in reference to her single "Icy Girl" as a way of breaking the, well, ice.

Matching his emoji-themed introduction, Saweetie sent back the perfect response in the form of a steaming bowl of noodles, a reference to the Migos' single "Stir Fry." Quavo replied with, "U so icy Ima glacier boy," to which Saweetie replied, "was hannin then."

According to GQ, they DM'd some more, then talked on the phone, then went on a first date — where, scary side note, Quavo nearly choked on a crab leg — and the two have been together ever since.

To make their origin story even more adorable, Quavo gave Saweetie a snowflake necklace engraved with the words "From Glacier Boy" on the back.

Quavo's tweet was inspired by the "how it started vs how it's going" meme, which is why he included "HOW I PULLED UP: HOW WE COMING," along with a cute photo of him and Saweetie clinking their fancy drinks together. The meme started as a way for couples to show off the progress of their relationship, usually by posting a screenshot of their first few texts alongside engagement photos.

As things go on the internet, everyone immediately jumped on the snowflake and noodle trend, and are now using them as a new way to flirt — just like the good, ol' eggplant — but also as a way to potentially strike up the same kind of long-term, happy relationship Quavo and Saweetie have.

Also unsurprisingly, the noodle emoji in particular is starting to take on a life of its own, and may be something you could use — again, just like that darn eggplant — to imply giving head. Get it? Because you slurp up noodles?

Of course, not everyone is Quavo, so let's just say the snowflake emoji isn't guaranteed to work for you and me the same way it did for him. In fact, it's resulted in some hilarious "how it started vs how it's going" memes, with people showing off their DMs and the disastrous (read: completely nonexistent) results.

More like this
21 Signs You're Not In Love Anymore
By Sara Altschule, Kathleen Ferraro and Carolyn Steber
Breeding Kinks Have Been On The Rise Since Roe V. Wade Got Overturned
By Lexi Inks
Are Quality Time & Gift-Receiving Love Languages Compatible?
By Lexi Inks
20 Women Reveal Exactly How Long It Took Them To Get Over Their Ex
By Amanda Chatel and Lexi Inks
Get Even More From Bustle — Sign Up For The Newsletter