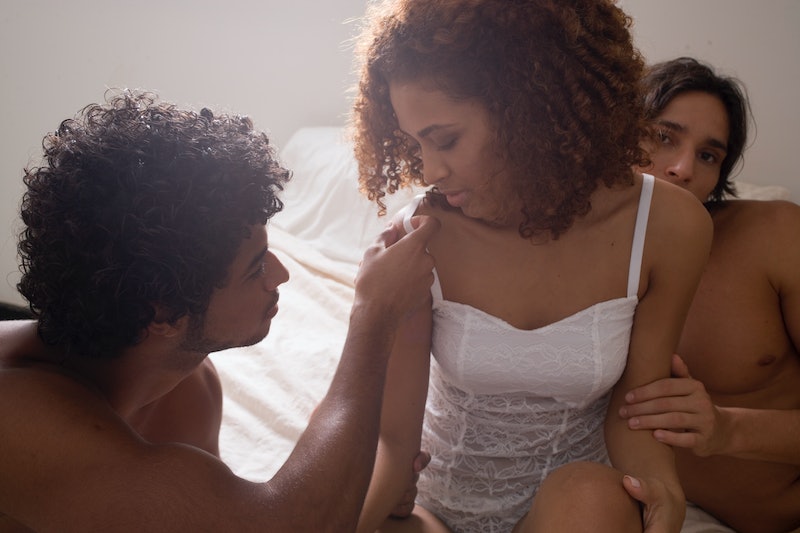 If you’re new to polyamory — whether you’re just curious about non-monogamy or you’re actually in your first poly relationship — you may find there’s a whole new set of vocabulary to get used to. For example, you may be familiar with many common terms — f*ck buddy, FWB, co-habitation, life partner, LDR, etc. — but less so with more specific phrases such as “compersion,” “metamour,” and “nesting partner.” Moreover, the ways we talk about polyamory are constantly evolving and may mean different things within different communities.

So if you’re ready to explore non-monogamy, or you’re staying mono for now but could use some translations for when you’re around your poly friends, here are ten terms to get you started.

The practice of engaging in multiple sexual and/or romantic relationships simultaneously, with the consent and knowledge of all parties, is known as ethical non-monogamy — as opposed to unethical non-monogamy, aka cheating. An umbrella term that encompasses polyamory, open relationships, swinging, solo poly, relationship anarch, and poly-fi relationships, ENM is sometimes referred to as “consensual” or “responsible” non-monogamy. Sexologist Carol Queen recommends The Ethical Slut by Dossie Easton and Janet Hardy as a primer to begin exploring the concept.

Like ENM, poly also describes the practice of engaging in multiple romantic relationships simultaneously with the consent and knowledge of all parties. Poly means “many,” and amory means “love,” which may or may not include sexual activity. “This term has also come to signify community that coheres around people who engage in poly practices,” says Queen, and can help people “get support and information” as they navigate poly communities.

There are different ways to structure poly relationships, such as hierarchical versus non-hierarchical, open versus closed, or solo poly versus a more “relationship-escalator”-oriented approach.

Choosing to not use barrier protection during sex with a partner, usually with an agreement about safer sex with other people (ideally after appropriate STI testing), is called fluid-bonding. “In addition to protecting self and partners from STIs, in a poly context fluid-bonding can also be a decision that demarcates connected relationships from more casual ones,” explains Queen. It’s possible to fluid-bond with more than one person in poly relationships, but when it comes to safety and testing, it may require a little extra communication between each partner.

If you’re “monogamish”, a term attributed to sex columnist Dan Savage, that means you and your partner have agreed that while you don’t necessarily identify as poly, you aren’t 100% closed to other partners, either. It helps describe the gray area of being together, while not strictly adhering to monogamy. Queen describes it as “an open relationship variant...a mostly-monogamous relationship that’s flexible enough to admit occasional play with others, or a ‘pass’ when someone goes on vacation, etc.” It can be a good way to dip your toe in non-monogamy if you’re curious.

Considered the opposite of jealousy, compersion describes the feeling of experiencing joy because another is experiencing joy. In the poly community, compersion usually refers to feeling happy when a partner is happy about their metamour (the term for your partner's partner). According to Queen, compersion can be “a strong bonding element and source of support in poly relationships, and a powerful tool to manage jealousy.”

Hierarchical relationships usually refer to when some poly relationships are considered more important than others (e.g., “my husband will always come before anyone else”), although in some cases it’s more of a descriptor used to describe levels of commitment (e.g., “my husband gets a majority of my resources because we live and are raising children together, but that doesn’t mean I love or consider him more important than my other partners”). Prescriptive hierarchical relationships are controversial in the poly community, seen by many as inherently unethical.

Non-hierarchical relationships come in various forms, but the factor that ties them together is that no one relationship holds more power than others by default.

Hierarchical relationships tend to use the terms primary, secondary, and sometimes tertiary t describe various levels of importance and commitment. Again, these terms either can be prescriptive (“she is my primary partner, so she will always come before my secondary partner”) or descriptive (“I raise children and share finances with my wife, so she is my primary partner, and my girlfriend and I don’t have those entanglements, so she is my secondary partner”). Primary partners may or may not co-habitate. “It's useful to think of these language options as a way to avoid — or at least recognize — hierarchy and relational assumptions,” says Queen.

A nesting partner, on the other hand, is a live-in partner (or partners). This person may or may not be a primary partner as well, but “nesting partner” is often used to replace the term primary partner, while still describing a higher level of entanglement, in order to avoid hierarchical language.

Queen defines polycule as “a grouping consisting of poly partners and their partners” akin to “an extended poly family.” It’s almost like a mini poly community that establishes its own rules of engagement and can necessitate communication, from scheduling arrangements to STI testing to childcare, says Queen. The sexual/romantic relationships within the polycule can vary as well: For example, Queen explains, members of a polycule can decide if the group is closed to its participants or open to playing or having relationships outside of it. If sex and romance is confined to the people in the polycule, this is also known as polyfidelity, says Queen.

A term that has its roots in political anarchism, relationship anarchy describes a philosophy of viewing open relationships and polyamory “without accepting hierarchy or socially-derived rules about what a relationship ‘should’ be,” explains Queen. “It is an extremely useful poly term for those who are charting their own path, and it helps focus in on the involved partners and their autonomy and emphasizes that they must make and consent to their relationships’ rules,” she says.

This article was originally published on November 21, 2016