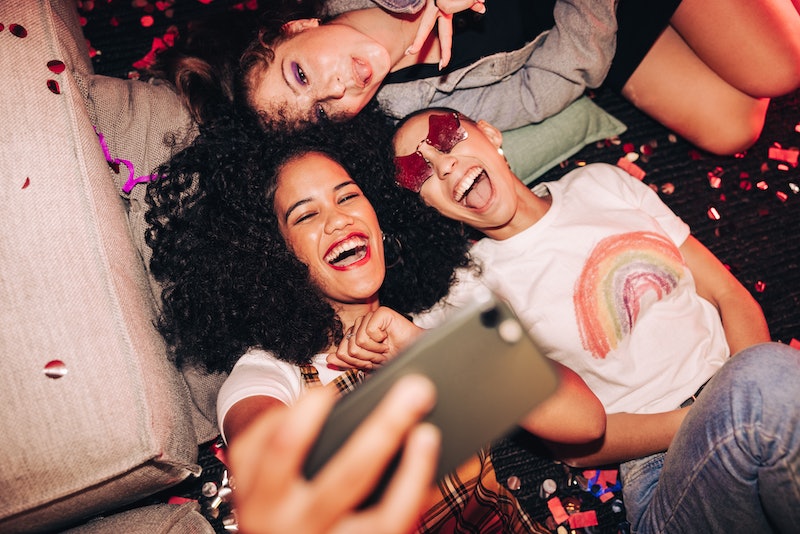 Thanks to many cultural shifts and an increase in more progressive worldviews over the past few decades, heteronormative monogamy isn’t necessarily the standard anymore when it comes to relationships. In fact, a 2016 study published in the Journal of Sex and Marital Therapy reported that over one in five adults (22%) have had experience in some form of non-monogamy.

The umbrella of ethical non-monogamy is wide and contains an incredibly diverse array of relationship styles, according to Dr. Tammy Nelson, a sex and relationship therapist and host of the podcast The Trouble With Sex. “Contemporary relationships take many forms, and commitment looks different to couples today,” she tells Bustle. “Some couples are creating non-traditional arrangements that include open marriage, polyamory, and swinging.” Two of the more common styles of non-monogamy are polyamory and open relationships — but that doesn’t mean everyone understands the differences between the two.

In order to get a full grasp on the contrasting elements of the two, it’s important to first define what each of them looks like. Below, sex and relationship experts break down the core traits of polyamory versus open relationships.

There isn’t necessarily one single definition of polyamory — but there are a few typical aspects to it that tend to always be present. “Polyamory comes from the combination of ‘many,’ from ‘poly,’ and ‘love,’ from ‘amory,’” says Nelson. “It implies that this type of open relationship agreement includes having loving, emotional, and/or romantic relationships with people other than the primary partner.”

Although many polycules (aka groups of people connected in some way by polyamorous partners) choose to structure their relationships differently than others, the main element of most polyamorous relationships is the romantic or emotional connection in addition to a possible sexual connection.

Within polyamory, there can also be a hierarchical dynamic that places more emphasis or energy on one partnership over others. However, for most experienced polyamorous couples with partners outside of their primary relationship, Nelson says these other relationships can add to the primary couple’s commitment and “may be as important or on an equal level as the marriage or central relationship.” The presence of hierarchy or lack thereof usually depends on the comfort level and security felt by each partner and can evolve with experience.

What Is An Open Relationship?

The term “open relationship” casts an incredibly wide net in terms of non-monogamy. According to Nelson, the ways couples structure their open relationship varies greatly, so the definition is difficult to pinpoint.

“‘Open relationships’ is an umbrella term for couples who have a flexible or fluid monogamy agreement where there is some kind of sexual experience with other people,” Nelson explains. “This could be experienced together or separately.” That said, she notes that every couple defines what an open relationship entails differently. “It might mean they are swinging, playing, or just checking out the ‘scene.’ Some define their relationship as consensual nonmonogamy, others see their relationship as monogamous, but with sexual freedom,” she says.

The boundaries and rules for open relationships are totally custom to each couple who engages in them, and can also have the same fluidity as those of polyamorous relationships. “Open relationships can look like casual hookups or one-night stands, or having a consistent friend-with-benefits,” as polyamory mentor and content creator Morgan K. previously told Bustle. “There's also open [or closed] swinging, where each person attends play parties and has casual sex, with or without their primary partner.”

Differences Between Polyamory Vs. Open Relationships

All non-monogamous relationship styles are unique and can look wildly different from partnership to partnership, but some can still be linked by common threads. Polyamory and open relationships look the same from the outside — and are often portrayed as such in media and entertainment — but tend to have some complex differences in their dynamics and structures.

Like Nelson mentioned, there is typically more of a sexual focus in open relationships, while polyamory in its core form tends to place more emphasis on romantic and/or emotional connections. As Laura J. Brito, a licensed clinical social worker, previously told Bustle, “Polyamory is a little more proximal in that partners agree to have romantic relationships with one or more additional partners that can be longer in duration. Polyamory may also include partners being more integrated into other areas of your life such as attending important events or sharing household responsibilities.” In many open relationships, though, outside sexual partners or dates don’t have a long-term or committed place in the primary relationship.

Entering into any non-monogamous structure for the first time can be intimidating, but there are definitely ways to set your partnerships up for success. “For couples looking to explore their sexual boundaries, looking at the continuum of monogamy starts with a question about opening their relationship,” Nelson says. Whichever route you take, she shares this pro tip: “It takes real communication to manage multiple partnerships of any kind.”

More like this
Are Quality Time & Gift-Receiving Love Languages Compatible?
By Lexi Inks
How To Set Rules If You're In An Open Relationship
By Lexi Inks
30 Clever Ways To Slide Into Your Crush's DMs
By Griffin Wynne, Carolyn Steber and Lexi Inks
The 19 Best Tweets & Memes About Bisexual Awareness Week
By Lexi Inks
Get Even More From Bustle — Sign Up For The Newsletter