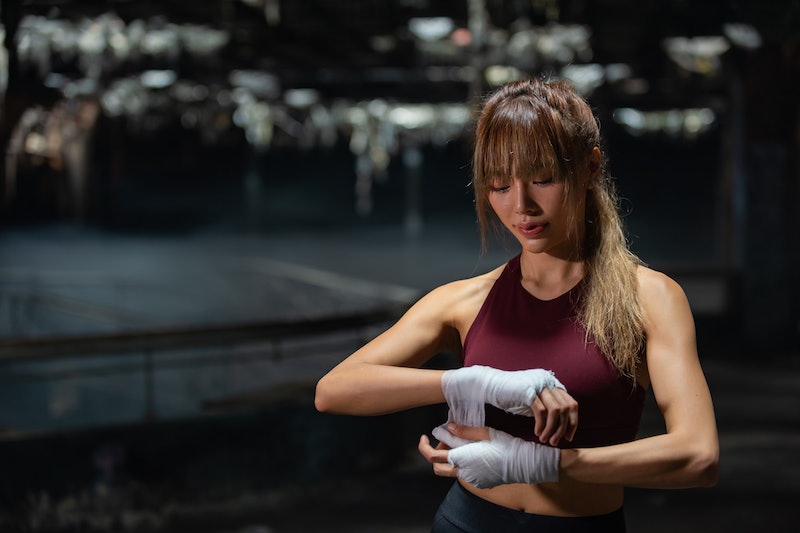 If you’ve ever taken a boxing class, then you know how good it feels to shuffle around and throw a few punches at a bag. But imagine doing that under a blacklight while bumping music plays, and you’ll see why everyone — including Selena Gomez and Hailey Bieber — is so into Rumble Boxing, the fitness class that’s all about jabs, uppercuts, and a super fun atmosphere.

Its cult following is why I wanted to give the workout a try. When I asked Noah Neiman, one of the co-founders of Rumble, what Rumble Boxing is all about, he said it’s a group fitness class made up of 10 rounds of boxing moves (think jabs and hooks) with some bodyweight-based exercises or dumbbell training thrown in. The result is a full-body workout that improves your strength and boosts your muscular endurance, all while providing you with an excuse to punch away your stress.

When I signed up for my first class, I immediately received a handy email breaking down everything I needed to know beforehand, including a 60-second video about the workout as well as a link to the six main punches you can expect to do (which is perfect for anyone who’s hesitant to box for the first time). While I’ve taken plenty of kickboxing classes in my day, I haven’t boxed with gloves and a bag before, so it was nice to get that info.

With my newfound knowledge and a fresh desire to see what all the ~rumble~ is about, I pulled on a pair of sneakers and headed to my local studio. Keep reading for my honest review of the ever-buzzy Rumble Boxing workout.

The first thing I did when I got to the studio was rent a pair of boxing gloves for three bucks (you can also bring your own) and buy a pair of hand wraps for eight. You wear these under the gloves, and they can be used again and again (though they’ll need to be washed after each workout because... they’re going to smell). I was also given two numbers to remember: the number of my bag and the number of a bench, aka my own personal workout spaces I’ll be using within the studio.

With gloves in tow, I ascended a staircase with 20 or so classmates and entered a dark room. While many workout studios are brightly lit, this one looked more like a nightclub, except instead of high-top tables and a bar there were workout benches on one side of the room and teardrop-shaped punching bags hanging on the other. The space also had a mirrored wall, LED screens, and an instructor in the middle of it all set up like a DJ, only visible by the glow of a laptop screen. At first, I found it all kind of dizzying and overwhelming, but once my eyes adjusted and the music started to play, I was ready to go. T.I.’s “Bring Em Out” had me rearing to punch, what can I say?

A typical Rumble Boxing class lasts 45 minutes and has 10 total rounds featuring 3-minute-long workout intervals. You either start out at your bag or on the floor to do strength work. Wherever you begin, the entire class kicks off with a group warm-up of jumping jacks and shadowboxing, followed by crunches on the floor. After that, since I started on the bag, it was time to pull on my boxing gloves to do jabs, uppercuts, and hook combos.

I quickly noticed that it felt incredibly satisfying to hit these bags. Fun fact? Neiman told me the Rumble punching bags are actually called “aqua bags” because they’re full of water, which helps reduce the impact on your joints. Between the water and the boxing gloves, I’m happy to report it didn’t hurt too much to punch — it was just delightful.

The teardrop shape of the bags is also meant to make it easier to see the trainer from anywhere in the room. I was right up front, but this is helpful for anyone tucked in the back. Speaking of the trainer, mine spent a lot of time by their laptop putting on one amazing song after another, all while calling out punching combos. As the class went on, and even with my high visibility, there were times when I got a bit lost. (As to be expected in any new workout class, right?) In those moments I decided to just keep punching until I caught on again.

It wasn’t until halfway through that I realized the LED screens around the room list all the moves. So yeah, note to self: If you ever get lost in the middle of a Rumble class, remember to look up at the gleaming list of hooks, uppercuts, and jabs.

Once the first half of the class was over (and I had punched and jabbed to my heart’s content), I moved to the benches for bodyweight conditioning exercises, like lunges and burpees. Again, the moves were listed on the LED screen as a nice reminder. Then it was back to the bags for a few more punches, then back again to the benches for a final round of strength training moves.

I was really into punching the bags, and even (gasp) enjoyed the rapid-fire rounds of strength training exercises, which included bent-over rows and oblique twists. Each circuit was so swift that I didn’t have time to register my tired muscles or racing heart, but instead zeroed in on doing as many reps as possible. I was in the zone, baby. I was also conveniently distracted by the lighting as it was constantly changing. The trainer even threw on a black light at one point that made everyone glow, which was really cool.

When the instructor threw open the doors at the end of class and everyone stumbled back into the light, I noticed that everyone was sweaty AF — including myself. Clearly, the workout is meant to be tough, but it was also super fun, welcoming, and just the right amount of challenging. It also went by so fast — TBH, I could’ve kept punching those bags for a least another 15 minutes... it was that enjoyable. If you’re in the mood for an upbeat, sweat-inducing, full-body workout that gets you in and out in a flash, I’d say Rumble’s where it’s at.