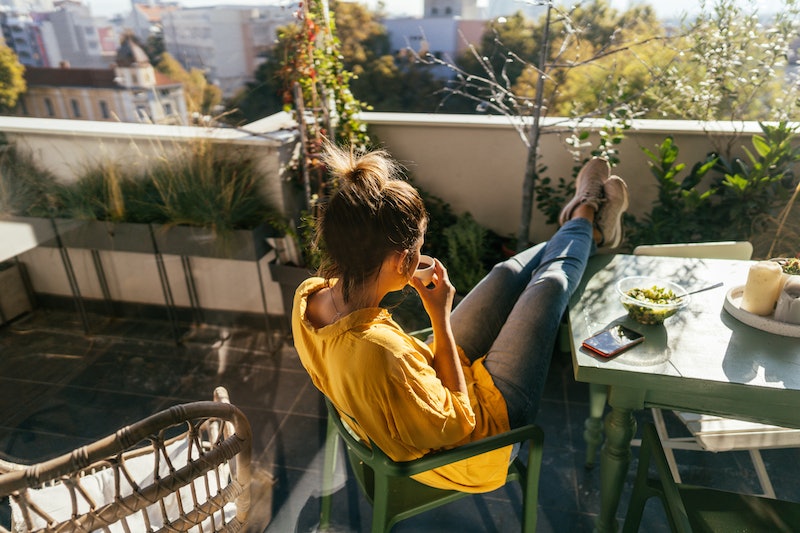 It's a laid-back Saturday, and you want something extra to go with your coffee and 5th rewatch of Shadow & Bone. If you're lucky enough to live in one of the 16 states (plus Washington, D.C.) that have legalized recreational cannabis, you may want to add a bit of a relaxing vibe to your morning buzz. But before you unearth that edible from the back of the cabinet, you might be wondering if it's even safe to combine weed and coffee.

"THC and caffeine are two of the most widely used psychotropic chemicals in the world, and they also both have a very long history of use by humans," says Rubin Torf, co-founder and president of Scientia Labs, a CBD producer, and Canapa, Scientia's lifestyle brand. "Caffeine in the brain results in reduced drowsiness or fatigue and improves reaction time," he tells Bustle. "THC results in a range of physiological changes and psychoactivity."

Everyone's body reacts differently to substances, of course, but in general, there are some norms to expect. "Caffeine use tends to energize most people," says Dr. Gary Starr, M.D., medical director of FOCUS, an international non-profit working toward developing cannabis quality management standards. "The effects of marijuana can vary, but many people use it to feel more relaxed."

Some of those varying effects from pot include short-term memory loss, while caffeine is associated with the opposite (sharpening your brain in the moment). Even though those effects seem to combat each other, Torf tells Bustle that the chemicals don't necessarily cancel each other out. Taken together, he says, "you're still going to have short-term memory problems from THC, and still feel awake from caffeine."

If having pot and coffee at the same time doesn't bring you to a limbo space between hyper-alert and hyper-chill, then what does the combo do? The next time you want to spend an afternoon kicking back with a joint in one hand and a cup of joe in the other, there are a few things you should know about how caffeine and weed do interact.

It might seem logical to try and mix pot with caffeine to counteract THC effects like memory loss, since you know coffee can make you more alert. However, "a combination of caffeine and THC may adversely affect memory," Dr. Starr tells Bustle. "Some research shows that caffeine and low doses of THC seemed to impair working memory more than THC would on its own."

Some of this research was published in 2012 in the British Journal of Pharmacology. The study found that combining coffee and weed can worsen memory problems. Though researchers focused on brain chemistry in rats, they speculated that the memory loss associated with pot might be especially dangerous when young people (whose brains are still forming) drink coffee and light up at the same time.

In a 2011 study conducted on monkeys and published in the journal Addiction Biology, scientists gave subjects a small amount (just 1 mg) of caffeine. Then, they gave them unlimited access to weed. Yes, in the name of scientific discovery, small monkeys were self-administering cannabis at will (via a lever, because they're monkeys). When the critters were given the low amount of caffeine, though, they were less likely go for the weed.

This may well result from the fact that just a little bit of coffee can make a small amount of pot go a longer way. "Low levels of caffeine may enhance the high and result in the need to use less marijuana to achieve the same result," Dr. Starr tells Bustle.

“Consuming the two substances together may produce different results than when each substance is consumed individually,” Dr. Seema Sarin M.D., head of lifestyle medicine at EHE Health, tells Bustle. A 2014 study in squirrel monkeys published in the Journal of Neuroscience, she says, shows that combining coffee and weed can actually bring down your high.

The monkeys were given THC, then a hit of a substance that works a lot like caffeine. When they got low doses of the caffeine substitute, the monkeys reached for less weed — but with high doses, they wanted more THC. While a small amount of caffeine may increase your high, a bunch of cold brew might blunt it (pun intended) and make it less effective.

This could happen in humans, too. In a 2018 study published in the Journal of Internal Medicine, researchers at Northwestern Medicine found that when you drink a lot of coffee (we're talking four to eight cups a day), the level of neurotransmitters in your endocannabinoid system decreases — meaning, more coffee makes your brain do the opposite of what it does when you're high. However, study participants were only drinking coffee (as opposed to having caffeine and weed together), so everything that happens chemically to human brains when the two interact has yet to be studied in detail.

Weed & Coffee Both Give Us Euphoria

A 2017 study published in the journal Annals of Neuroscience found that both caffeine and cannabis increase levels of dopamine (the happiness hormone) in the brain. On their own, both weed and coffee give you this euphoric boost, but the study concluded that the effects magnify when you combine the drink and the plant. "Since both chemicals increase dopamine levels, but through different mechanisms, the combined effect is an increased sense of euphoria," Torf tells Bustle.

There’s some evidence in animal studies that cannabidiol, or CBD, an active compound in cannabis, might help with jittery feelings after a large iced coffee. Caffeine in high doses can produce what’s called locomotor sensitivity, or a high level of movement and alertness. A study published in Neurotoxicity Reports in 2020 found that when mice were given a combination of caffeine and cocaine (which also makes people jittery), their locomotor sensitivity spiked — but when a few rats were then given a dose of CBD, they calmed down and moved more slowly.

Both Pot & Coffee Can Increase Your Heart Rate

Before you leap into the dopamine-induced euphoria that can you can get from a coffee pot, make sure you've talked to your doctor about your heart health. "Both marijuana and caffeine are known to cause tachycardia — or an increased heart rate. In people with underlying heart disease or problems with heart arrhythmias, consuming marijuana and caffeine — together or separately — could potentially put them at risk for heart complications," Dr. Starr tells Bustle.

As with anything cannabis-related, there needs to be more research about how weed and caffeine interact, so be cautious. "It's important to create your own dosing plan which works for your unique body and lifestyle," says Valerie Sakota, co-founder of cannabis startup Babari. "If you're new to testing out THC and caffeine, we recommend taking it for a spin on a morning when you've got a productivity goal but no meetings or deadlines. Start with a small dose — a few puffs of a joint or pipe, or a 2.5 mg of a tincture or edible with your morning joe." Then, take the next few hours to be extra mindful of how you feel.

Readers should note that laws governing cannabis, hemp and CBD are evolving, as is information about the efficacy and safety of those substances. As such, the information contained in this post should not be construed as legal or medical advice. Always consult your physician prior to trying any substance or supplement.

Owolabi, J.O. (2017) Caffeine and cannabis effects on vital neurotransmitters and enzymes in the brain tissue of juvenile experimental rats. Annals of Neuroscience, https://www.ncbi.nlm.nih.gov/pmc/articles/PMC5448447/.

Prieto, J.P., López Hill, X., Urbanavicius, J. et al. Cannabidiol Prevents the Expression of the Locomotor Sensitization and the Metabolic Changes in the Nucleus Accumbens and Prefrontal Cortex Elicited by the Combined Administration of Cocaine and Caffeine in Rats. Neurotox Res38, 478–486 (2020). https://doi.org/10.1007/s12640-020-00218-9

Rubin Torf, co-founder and president of Scientia Labs and Canapa

More like this
Do Green Powders Work As Well As TikTok Says They Do?
By Carolyn Steber
How Ovulation Affects Your Sense Of Smell, Libido, & More
By JR Thorpe and Lexi Inks
The 11 Benefits Of Aerial Yoga, According To Trainers
By Carolyn Steber
All The Reasons Your Gums Bleed When Brushing Your Teeth
By Carolyn Steber
Get Even More From Bustle — Sign Up For The Newsletter
From hair trends to relationship advice, our daily newsletter has everything you need to sound like a person who’s on TikTok, even if you aren’t.

This article was originally published on Feb. 18, 2016