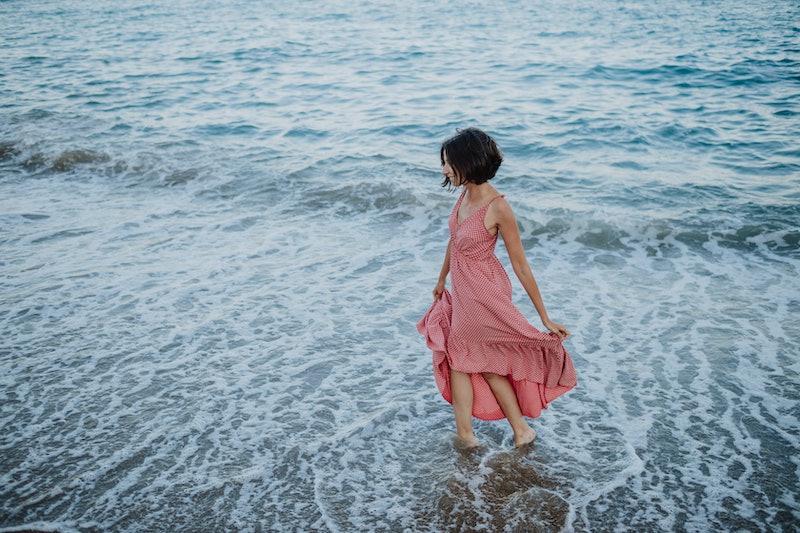 If you've ever thought your nipples looked kind of different, you're definitely not alone. It's pretty common for women to worry about their breast health, as well as whether or not everything looks as it "should." But guess what? Since they come in all shapes and sizes, it's pretty likely your nipples are totally normal — and healthy — just as they are.

Whether you have large nipples, small nipples, soft nipples, or ones that are pushed inward (otherwise known as "inverted"), it's all well within normal range. "There is no one universal template of normal and women should not have to feel like they must fit a single standard mold," board-certified dermatologist Dr. Tsippora Shainhouse M.D., FAAD, tells Bustle. "By showing different variations ... women can understand that they are both unique and more similar than they think, and that they are not alone."

You should, however, note any changes in your nipples or breasts, especially if they're sudden. "If you notice any new or recent changes in your breast tissue, overlying skin, or in the nipples, get it checked out by your physician," she says. For the most part, though, most types of nipples are considered healthy. Read on for some common shapes, sizes, and colors, and know that they're nothing to worry about.

Inverted nipples, for one, are actually incredibly common. In fact, as Dr. David Greuner, M.D., a double-board-certified surgeon and co-founder of NYC Surgical Associates, tells Bustle, 10 to 20 percent of women have them. "Inverted nipples are usually just a part of your genetic makeup," he says, adding that they're nothing to be embarrassed about. While they can occasionally make breastfeeding difficult — if you should choose to do that — they won't cause any other issues.

While both nipples can be inverted, it's also possible to have one that is and one that isn't. "If this is your [nipple type], it is perfectly safe," Shainhouse says. "If this is a new finding, it can be a sign of breast cancer." If that's the case, don't hesitate to see your doctor.

Many women have a nipple surrounded by a round ring of color known as the areola, but this isn't true for everyone. "Women can have almost invisible areolas because of a small size and the color may almost match their skin tone," Greuner says. That size and color are a common variation, he explains, so “having almost no areola is completely fine."

4. The Flat And/Or Puffy Kind

Flat nipples, as well as puffier ones, are perfectly healthy, too. These are more common for girls in their pre-teens and teens, but Shainhouse says they can stick around into adulthood. "Either the entire areola/nipple looks like a small mound on top of the breast or the nipple is just flat and almost melds into the areola," she says. "The nipple can harden and become more raised with cold/stimulation."

You know those little bumps on your areola around the nipple? Also incredibly common. "These are actually glands called Montgomery glands," Shainhouse says. "They can look like whiteheads, and sometimes you can squeeze out a little bit of keratin/dead skin cells — but don't play with them." Some women have more than others — either way, it’s nothing to sweat about.

If you find that hairs grow around your nipples, here's your friendly reminder that it's simply part of being a mammal. "It is fairly common to have stray, dark hairs growing out of the areola area," Shainhouse says. "They can be fine, or more coarse, like pubic hairs. Rarely, it can be related to conditions in which you have too much testosterone (polycystic ovary syndrome), but it is usually common."

If you have a third nipple, never fear. Also known as a "supernumerary nipple," it happens to a decent amount of ladies as well as men. As Shainhouse says, "All mammals have nipples and many mammals have many nipples along a 'milk line'. It is not uncommon for humans to be born with extra, smaller nipples along this milk line. They can look like flat moles or have a fully-formed, raised bump." Nothin' to worry about.

The opposite of an inverted nipple is considered a "normal" nipple in the medical world. As Shainhouse says, "[A normal nipple] refers to the normally everted nipple that can become harder or erect with cold or stimulation. They are usually a few millimeters above the surface of the areola at rest/regular state." She does say, however, that most women's nipples do not fall into this category, despite the fact they're called "normal."

If you're worried about the length of your nipples, it may be time to think about them differently. "Nipples come in all shapes and sizes," says Greuner. "Having extra long or extra small nipples is not uncommon at all. Different people are born and develop in different ways; there is no medical reasoning for the size of your nipple and no reason for them to cause distress." As mentioned before, the only time you should worry is if there are any sudden changes in size or they become mismatched. If that happens, give your doctor a call.

The color of your nipples is dependent on your skin tone, so they'll obviously vary for everyone. "Usually your nipples and areola are a little darker than the rest of your skin," Greuner says. But they can also change over time. "Your areolae can ... change color in times of puberty and then change in adulthood as well as when you are pregnant." This is all due to hormone fluctuations.

When it comes to the size of your nipple and areola, it's perfectly fine for them to be bigger. "Some women have nipples that take up a third of their breast," gynecologist Dr. Prudence Hall, M.D. of The Hall Center, tells Bustle. "They are all absolutely and perfectly feminine. I don't believe this variability or lack of uniformity should be [a] concern."

So, there you have it. As long as your breasts and nipples are healthy, it doesn't matter if your nipples are extra long, puffy, or inverted. It's usually all a-OK and nothing worth worrying about.