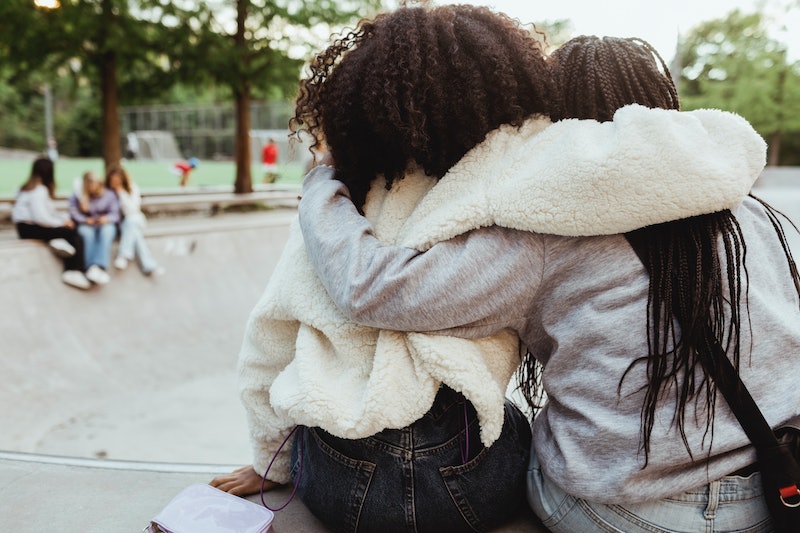 Insecure isn’t just Issa Rae’s work of genius: It’s a feeling that can be really difficult to dismiss. Whether it’s worries about measuring up to others, not feeling secure in a job, or finding fault with what’s in the mirror, insecurity is an expression of low self-esteem where people don’t believe in their own self-worth. Dealing with insecurity yourself is annoying, if inevitable, but seeing your bestie — you know, the one who has all her sh*t together — struggle with insecurity is a special kind of painful. If you’re wondering how to make someone feel better about themselves when they’re really not feeling it, there are some techniques that can help — beyond standing outside their apartment blasting their fave songs on a boom box.

Healthy self-esteem has three main components: self-respect, self-care, and self-acceptance, counselor Jasmin Terrany, LMHC, previously told Bustle. "Self-respect [means a] clear understanding of how you deserve to be treated. Self-care [includes] consistent efforts to take care of your own needs. [And] self-acceptance [is a] willingness to be open, vulnerable, and interested in personal growth," Terrany said. Without those three ingredients, insecurity can creep in.

Helping someone who feels insecure means finding ways to help them develop their own sense of self-worth. Here are 10 strategies you can use as a friend who just wants the best for your bestie.

1. Don't Tell Them They're Wrong

When your BFF says she can’t do anything right, your instinct is, naturally, to say, “No way! You’re so wrong!” That phrasing can end up backfiring: “What are you talking about? You're so pretty/smart/successful!" may seem like a valid or kind response, but what an insecure person will hear is: "Not only are you a failure at XYZ, nobody believes you." Heidi McBain, LMFT, says it's important for them to know that you're hearing them, even if you believe the thoughts don’t have merit. “Give them time and space to process how they are feeling with you,” McBain says — even if your instinct is to immediately shut down any feelings that they’re not the best person in the world.

“But you’ve done XYZ!” may seem like a surefire way to quash low self-esteem, but studies reveal that insecurity can be particularly intense if it’s rooted in “performance based self-esteem” — where self-esteem is based on how well people do at something like a job, grades, financial stability, relationships, whatever. A study published in Economic & Industrial Democracy in 2015 found that if people based their self-esteem on performance, they were much more likely to feel depressed and burned out — because everybody fails at least some of the time.

“It’s helpful to ask them how you can best support them right now,” McBain says. Sometimes they may want to talk their insecurity about their body through with you; perhaps they may just want to express it without your comments. Or they may just need you to do something tiny to help. A 2017 study published in Developmental Psychology suggested that small gestures, like helping them with a chore or offering to give them call, can be super effective in a relationship where one partner is insecure.

4. If They’re Feeling Disconnected, Address It

Maybe they’re feeling cut off from you because they’re feeling insecure in the friendship: that you’re tired of them or find them boring. In that case, building a bridge for communication is really valuable, McBain says. “Let them know that you’d like to hear about their experience with you and see if together can figure out new ways to reconnect with one another,” McBain says. You may feel awkward saying “I love you so much” or “you’re so cool,” but take their lead.

So how can you make someone feel better about themselves? Model self-compassion. "Self-compassion is being gentle with yourself, not beating yourself up over your past decisions, and accepting that you are human and make mistakes," therapist Kimberly Hershenson, LMSW previously told Bustle. It means you’re not the person who provides them with external validation; they’ll learn to give it to themselves. A 2015 study in Personality & Individual Differences found that learning to be self-compassionate cam actually help shield people from the effects of low self-esteem.

6. Talk To Them On The Phone

"When you want to convey tone, pick up the phone," social worker Rebecca Kronman LCSW previously told Bustle. "So many insecurities arise from misunderstandings and miscommunications when we try to have complicated conversations through text.” The human voice is capable of communicating a lot of information through tone of voice alone, so getting on the phone — or going for a walk in person — could be as valuable as your words when you’re helping your insecure friend.

7. Adapt To Their Communication Style

Maybe your friend just isn’t the chatting type, though. “Some people are external processors and like to talk out how they are feeling with others,” McBain says. “Other people are internal processors and need time to first process alone, maybe through journaling or going for a long walk solo, before being ready to share their feelings.” Go with whatever makes them feel most comfortable and secure, she says: Maybe you can sit with them while they think quietly, or drop off chocolate and a blanket.

It may be mystifying when a scholarship winner or the most beautiful woman you know confides in you that they feel horribly uncertain and doubtful about their own value. How can this person, for whom there is so much proof of their worth, feel a lack of confidence? How can you help someone who is insecure when it’s so obvious to you that they’re wonderful?

Research shows that sometimes the gold medal winners are the most vulnerable of all to low self-esteem, because they rely on external validation to reassure them of their place. A 2018 study of athletes in Psychology of Sports & Exercise found that athletes who really identified themselves with their sport, and found all their self-esteem in it, were more likely to burn out than people whose identity centered on other things.

Insecure people can experience some distorted thought patterns. “One common distortion is 'catastrophizing', which is assuming the worst outcome without knowing all the facts," counselor David Bennett previously told Bustle. To them, a missed text may mean they think a friendship is over, or their Hinge match doesn’t like them any more; a criticism at work may make them feel like they’re about to get fired. If you notice that this is how your friend thinks or talks, gently remind them of other ways to interpret the situation instead — didn’t their Hinge match say they were going camping for a few days with spotty service?

10. Stop Them Short If They Start Comparing Themselves

Everyone compares themselves to others, but it can be very difficult for people with insecurities to look at other people flourishing and not compare their own situation. If they’re the kind to refuse compliments and pay attention to other people’s achievements instead, they’re showing signs of insecurity, psychologist Dr. Natalie Feinblatt previously told Bustle.

Consider diverting their attention to stuff they love and are passionate about. "When it comes to our insecurities, if we shift our focus from what insecurities we have and instead spend time acknowledging all we are good at and all we like about ourselves, we can grow healthy self-esteem and confidence,” psychologist Kati Morton LMFT previously told Bustle. "I think you're comparing yourself and it's going to drive you nuts; want to talk about the softball game next Saturday instead?" is a phrasing you can offer.

Ultimately, insecure friends have to decide that they want to feel better about themselves; nobody can force them. But letting them know that there's someone in their life who hears them and appreciates them unconditionally can help set the stage for self-acceptance.

This article was originally published on Oct. 26, 2015