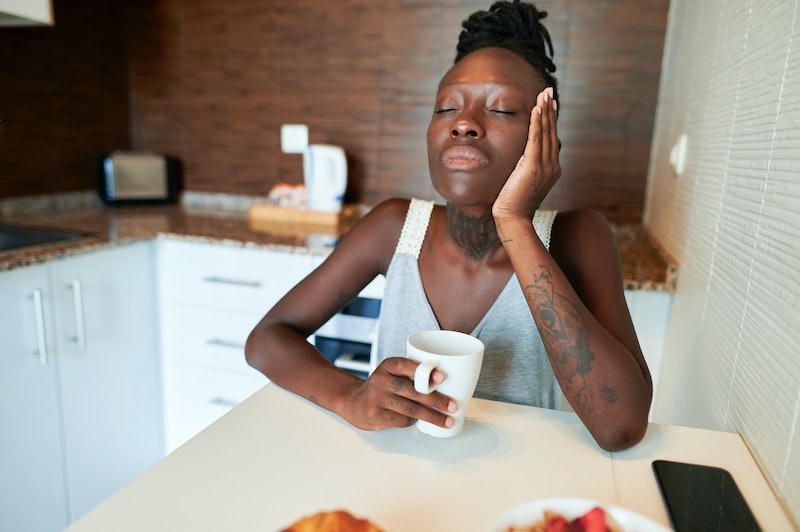 You’re cranky because all you want in the world is a breakfast burrito before you go forth and conquer your day. Once you chow down, you may be less hangry, but you’re more exhausted than you were when your alarm jolted you awake. Figuring out why you’re tired after you eat may be the secret weapon you need to make you truly unstoppable at actually running those errands after weekend brunch.

“Some tiredness after eating a full meal is generally normal and not something to be concerned about,” says Alyssa Pike, a registered dietitian and manager of nutrition communications at the International Food Information Council (IFIC). But if food is supposed to give you energy, why does eating make you tired?

Why Are You Tired After You Eat?

Especially if you’ve gone from super hungry to fully sated in a short span of time, it might be your lizard brain that’s making you sleepy. “From an evolutionary perspective, food was not always readily available,” Pike tells Bustle. In that context, “It might make sense that we are relaxed after eating a full meal. The hypervigilance associated with hunger has subsided, and we are free to rest.”

On the flip side, your need for a post-meal nap might mean that you’re still hungry. “If we are still tired after eating, it could be because we haven’t eaten enough — AKA supplied our bodies with enough energy — to sustain us throughout the day,” Pike says. If you’re wiped out after fueling up, you might need to whip up an extra snack.

You might also have hidden food intolerances that are making you sleepy after you eat — your digestive system needs to kick into overdrive when you drink milk and you’re lactose intolerant, for example, and all that extra work can tire you out. Pike also points to conditions like chronic fatigue or anemia that can make you exhausted post-meal, so you may want to check in with your doctor if food consistently drains you more than energizes you.

“Researchers aren’t totally clear on why tiredness after eating happens, but one hypothesis is that certain foods may influence this sleepiness,” Pike explains. Giving yourself a sugar or caffeine rush might result in a crash after the energy burst, while some foods might make you tired from the jump.

Trypotphan is the amino acid found in high-protein foods — think turkey — that is the oft-cited culprit for that post-holiday meal nap. Pike tells Bustle that tryptophan helps the body create the neurotransmitter serotonin, which helps regulate sleep. “It’s possible that increased production of serotonin is responsible for that post-meal sleepiness,” she says.

According to a 2016 study published in the journal eLife, meals that are high in protein and salt (marinated tofu sandwich, anyone?) make fruit flies pretty sleepy. Scientists suggest that the effect is translatable to humans, which might explain your post-dinner siesta.

How Can I Be Less Tired After Eating?

Sometimes, the goal of your brunch host is to give everyone a food coma. If you have to cross eight million things off your to-do list that afternoon, however, Pike says there’s no universal formula for what you should eat to keep yourself more awake.

“Trial and error is usually your best chance at figuring out what works for you when it comes to nutrition,” she explains. “See if you notice a difference after eating various portions. See if eating more frequently and/or a mix of macronutrients [AKA carbohydrates, proteins, and fats] helps you feel more energized.”

Not sure where to start with your food sleepiness tests? “Generally, it’s helpful to have a mix of food groups at each meal as each type of macronutrient provides essential energy and nutrients to our bodies,” Pike tells Bustle. “A combination of all these nutrients can help us feel more energized after eating.” Which is really what you were going for in the first place.