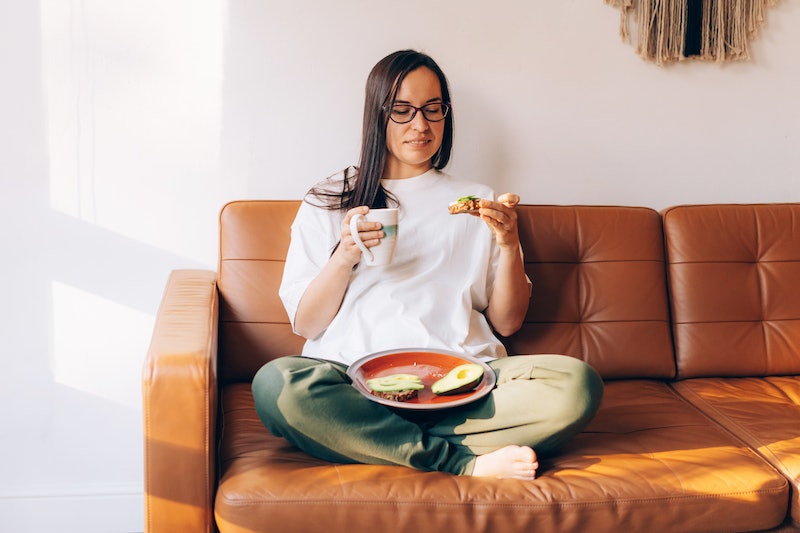 It’s never fun when a bite of sandwich or sip of soup sets off a sprinkler system in your nose. Suddenly, you have to reach for a napkin to catch the stream that’s swiftly exiting your head. And yet, however gross it may seem, it’s actually incredibly common to experience a runny nose when you eat.

In fact, there’s even a term for this type of runny nose: gustatory rhinitis. “The cause of gustatory rhinitis is capsaicin, the same chemical compound that gives peppers their heat,” Dr. David Culpepper, M.D., the clinical director of LifeMD, tells Bustle. “Basically, when food is very spicy, the body responds to the capsaicin as if it is a foreign body. Mucous membranes make more mucus in order to ‘flush out’ the offending heat, and this is what leads to the runny nose.”

The reason why the body reacts this way isn’t fully understood, says Dr. Alona Pulde, a board-certified practitioner and advisor at Lifesum. But you can think of it as a non-allergic runny nose that results from nerve stimulation, rather than a cold or an immune system response — and that nerve stimulation happens from spicy heat. “Foods that can be triggering include hot peppers, hot sauce, hot soups, chili powder, curry, onions, and garlic,” Dr. Pulde tells Bustle.

Literal heat can be a culprit, too. Eat a bowl of steamy pasta, soup, or even a hot piece of toast, and you might have to blow your nose. “It's essentially the same thing that can happen when you take a shower,” Dr. Culpepper explains. “The steam entering your nasal cavity moistens the mucus, causing your nose to run.” Should this be of concern, though? Experts weigh in.

Is It OK If Your Nose Runs When You Eat?

You’ll know the runny nose is just plain old gustatory rhinitis if your mucus is more watery than booger-y and if it isn’t accompanied by congestion, face pain, or sneezing. When the flow happens while eating, and not because of a cold or allergies, it’s simply your nose nerves reacting to stimuli by letting the floodgates loose.

So if your nose is running like a faucet after a round of spicy tacos, no worries. “There’s nothing to fear from a runny nose caused by spicy or hot food,” Dr. Culpepper says, adding that it’s actually a good way to clear out your sinuses. This is why everyone recommends hot soup — and especially spicy soup — for colds.

Is There A Way To Make It Stop?

Let’s say you’re on a date or meeting a coworker for lunch, and you really don’t want to deal with a drippy nose. While you can always quickly dab your face with a napkin, Dr. Culpepper says it might be easier to use an over-the-counter nasal spray. Simply spray up each nostril an hour before eating, he says, and you should be able to enjoy your meal snot-free.

It’ll also help to avoid trigger foods, adds Dr. Pulde. If you know spicy pasta always sets off the sprinklers, go ahead and skip it this time, especially if you don’t have tissues on hand. You can also relieve lasting discomfort by irrigating your nasal passages with a Neti-Pot later on, she adds. Run some saline water through your sinuses to flush out irritants and extra mucous, and then get back to enjoying all your fave hot ‘n spicy foods.

More like this
Got Brain Fog? Here Are The Best Supplements For Memory & Cognition
By Carolyn Steber
Here's Why Your Knee Hurts When You Bend It
By Carolyn Steber
The 9 Best Exercises For Piriformis Syndrome Relief
By Carolyn Steber
I Tried The Ice Barrel's Cold Therapy Tool & Now I Like Ice Baths
By Allie Flinn
Get Even More From Bustle — Sign Up For The Newsletter