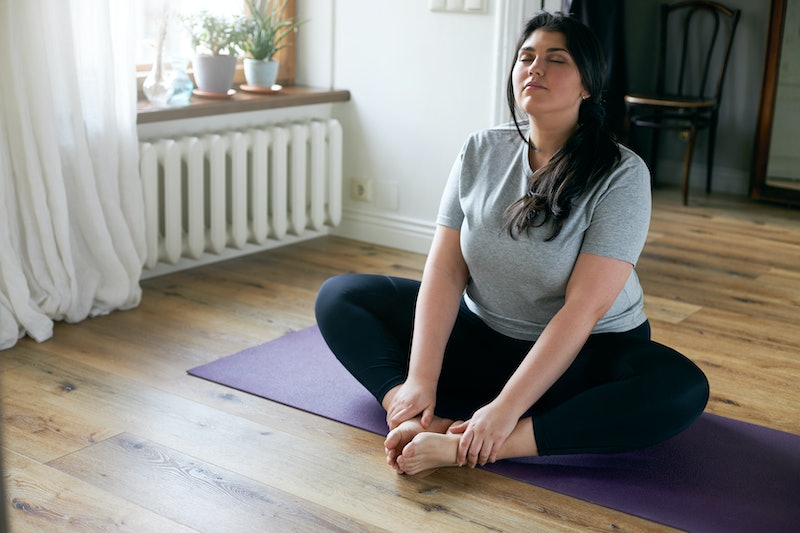 If you’re looking for a different type of experience on your yoga mat, you might want to give yin yoga a try. Unlike the fast-paced flow of power or vinyasa yoga, yin is all about slowing down, taking deep breaths, and holding poses for much longer than you’re used to.

You can think of yin yoga as a passive type of practice, says Brandt Passalacqua, the founder, director, and lead teacher at Breathing Deeply Yoga Therapy. The goal is to hold each pose, or asana, for three to five minutes — and sometimes even longer. The extended time in the poses helps you stretch the connective tissues in your body, he says, like your ligaments, fascia, tendons, and joints.

Yin yoga is all about getting into the nooks and crannies of your body, which is why it focuses on bendy poses that work your joints through their full range of motion, like your spine, sacrum, hips, pelvis, or knees, Passalacqua says. A typical class includes staple moves like child’s pose, butterfly, frog, pigeon — basically all the best deep, stretchy asanas that you can perform while sitting or lying down.

There’s also a meditative aspect to yin yoga. “You can expect to learn how to incorporate deep inhales and exhales while practicing these poses,” Passalacqua tells Bustle. You might even do a guided meditation, he adds, which involves narrowing your concentration to the present moment or a single object or task, and experiencing it fully. Sounds relaxing, right?

Below, instructors break down everything you need to know about yin yoga and its benefits.

Whether you take a yin yoga class in person or online, you should go into it knowing that you’re about to hold each pose for what’ll probably feel like forever. According to Kate Lombardo, the yoga director at YogaRenew Teacher Training, you’ll spend some time getting ready to hold the poses before slowly moving through each one.

By giving yourself time to settle into each posture, it allows you to fully tap into and release all the layers of tightness in your body, she tells Bustle. While it’ll likely feel relaxing once you start to loosen up, don’t be surprised if you feel tight or stiff at first. “These are restful poses, but at the same time very engaging, so you may find yourself struggling to hold them for the first couple of times,” Lombardo says.

Yin yoga teachers often recommend using a prop, Lombard adds, like a yoga block or blanket, so that it’s easier to find and hold a comfortable position. Finagle a block or towel into the right spot and you should be able to release a little deeper into the stretch — and feel much better doing so.

Along with the poses listed above, Lombardo says you might also do a reclined butterfly, a supported fish pose, a dragonfly pose, saddle pose, caterpillar pose, and a legs-up-the-wall pose. And, of course, you’ll also do savasana, she says, aka the corpse pose where you fully relax on your back to soak up the practice. Depending on your teacher, you may also be led through a guided meditation as you move, as well as lots of deep breathing.

One of the main benefits of yin yoga is the way it effectively stretches your connective tissues, which are prone to stiffness. “By holding deeper stretches, you can actually strengthen these tissues,” Passalacqua says. “This improves flexibility and reduces aches, pains, and stiffness in your joints.”

By breathing deeply throughout your practice, you can also stimulate blood flow and improve your circulation, Passalacqua says. This is another reason why you’re likely to leave class feeling a little less achy and in pain, and it’s why it’s a style of yoga recommended to those with arthritis, lower back pain, sciatica, and other similar conditions.

Of course, it’s easy to see how the low, slow, meditative nature of yin yoga would make it an amazing stress buster, Passalacqua notes. This type of yoga in particular is known to reduce stress, anxiety, and even depression, he says. Another perk is the boost in mental fortitude that comes from holding a pose for a lengthy period of time.

“It gives you practice with leaning into discomfort rather than backing away, and helps you learn to breathe through it until you find a sense of ease on the other side,” Lombardo says. “It exemplifies that all moments, no matter how challenging they may be, are temporary and that you have the ability to face whatever it is that comes your way.”

Who Should Try Yin Yoga?

“Those who are seeking a slower-paced, more relaxing type of yoga to help them de-stress would find yin yoga particularly appealing,” Passalacqua says. It’s also a great complement to fast-paced “yang” styles of yoga, like ashtanga, vinyasa, and power yoga, if you’re looking to switch things up throughout your workout week.

How Often Should You Do Yin Yoga?

To get the most benefit from yin yoga, Passalacqua recommends practicing it anywhere from once a week to once per day, depending on your needs. “You always want to be careful about overdoing it with any type of exercising or stretching,” he says. “But because it is a more slow-paced and relaxing style of yoga, it can often be easier and safer to incorporate on a more frequent basis.”