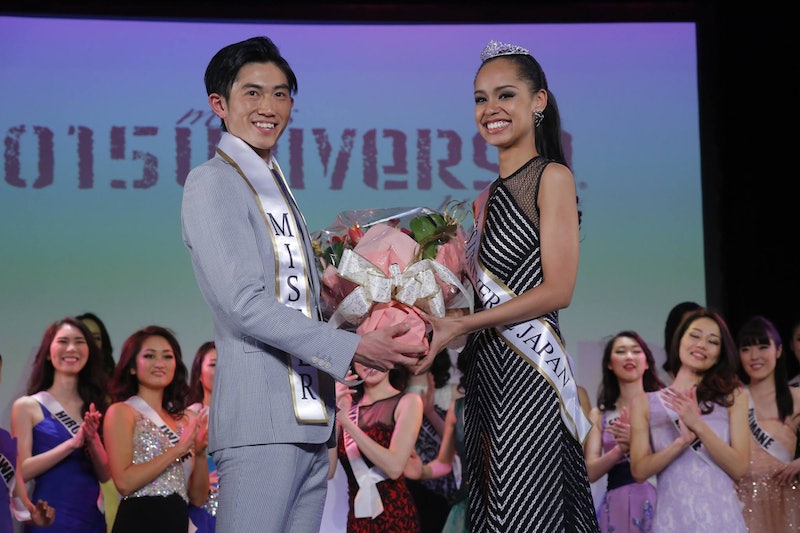 Well this isn't the first time something like this has happened. After controversy around Miss America, Nina Davuluri, being of Indian descent, the issues toward race in beauty contests are creeping up in another part of the world. The newest crowned Miss Universe in Japan, Ariana Miyamoto is being called "not japanese enough." Although Miyamoto is both a citizen and native of Japan, she is considered, as many people in Japan describe, a "haafu," which holds the definition of someone being multi-racial or half-Japanese. According to NBC News, Miyamoto was "born in Japan to a Japanese mother and African American father, Miyamoto is a Japanese citizen, grew up in Japan, and identifies as Japanese."

While there has been mixed emotions, she's been able to gain encouragement for her reign. She's described by Japan Today as a "saishoku kenbi, a woman blessed with both intelligence and beauty." They explain, "Growing up in Japan, she is no stranger to Japanese culture and even has a 5th degree mastery of Japanese calligraphy."

But even though she's had support from many in Japan, not everyone is fully onboard. Being the first winner ever to be multi-racial, the beauty queen is going through a lot of criticism, especially those who took to social media to express their ignorance.

Sparking controversy on Twitter, a few people have commented on the beauty contestant's win. According to the Washington Post's translations some have said, "Even though she’s Miss Universe Japan, her face is foreign no matter how you look at it!" or "Beauty contest. Miss Universe Japan is….wha? What kind of person? She’s ….not…..Japanese…right?"

Although some of the comments have been harsh, there are some critics who have explained that Miyamoto's win is a great advancement for Japan, which is thought to be a very homogeneous country.

The filmmaker of the film "Hafu" explains to NBC News, "The selection of Ariana Miyamoto as this year's Miss Universe Japan is a huge step forward in expanding the definition of what it means to be Japanese." Co-director of the film Lara Perez Takagi, also explains, "In a country where the majority of fashion beauty magazines and TV shows are reigned by 'hāfu' models and actors, it was actually about time that a mixed-race Japanese girl won the Miss Universe pageant."

And while Miyamoto has much training to go through before the big pageant, she's holding a really positive attitude about the entire situation. She told Rocket 24 News that she even looks up to a diva we love here in the States, Mariah Carey. Miyamoto explains, "She faced some racial hurdles, similar to myself, but she overcame them and became a top star, so she’s been a big influence on me." She also says, "The world competition is going to be tough, but I’ll believe in myself and continue doing me best!"

Well, I'm certainly all for this and am excited to see Miyamoto compete in Miss Universe next year. It's great to see women of all color represent a country that they love and respect. And while not all people may come to accept the different changing aesthetic of all races and ethnicities, having someone as beautiful and confident as Ariana Miyamoto sure is a great start.

More like this
TV Schedules Undergo Major Changes For The Queen's Funeral
By Sam Ramsden
Pro Footballer Zander Murray Is "Blown Away" By Support After Coming Out
By Sam Ramsden
The 9 Most Head-Turning U.S. Open 2022 Beauty Looks
By Rachel Lapidos
Princess Charlotte’s Outfit Paid Tribute To Her Beloved “Gan Gan”
By El Hunt
Get Even More From Bustle — Sign Up For The Newsletter