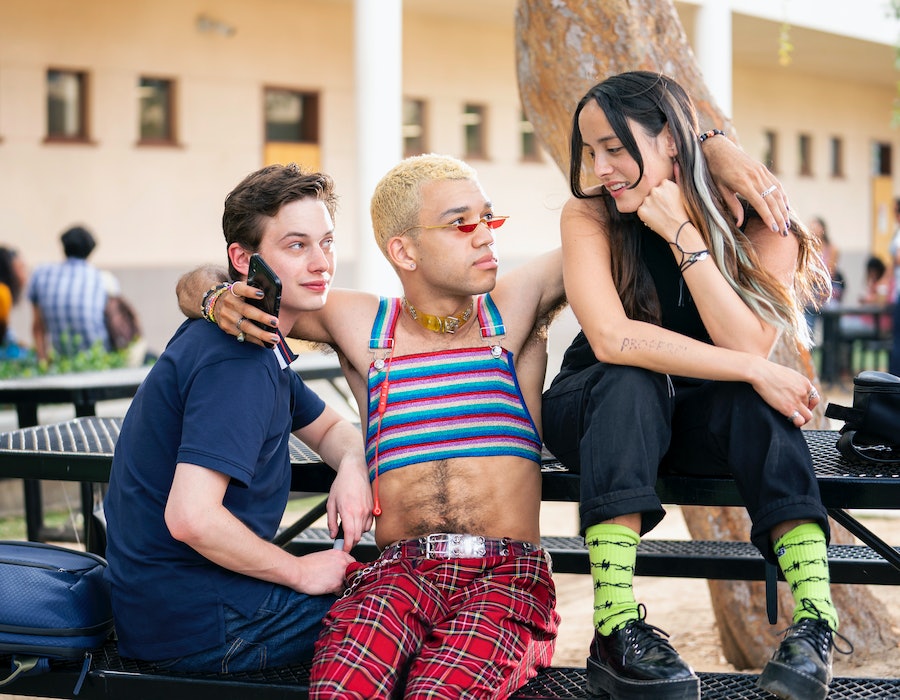 The first thing we learn about Chester (Justice Smith) in HBO Max’s Genera+ion is that clothes are the one hill he is willing to die on. Unlike the rest of his bland classmates, he struts onto campus in a rainbow striped crop top, a floral yellow holographic choker and a pair of tiny tinted sunglasses. When a teacher immediately interrupts his catwalk to deliver a dress code violation, Chester accepts it proudly. It’s not just about the clothing, but the freedom to express himself, to ask for more out of life than the Gap. “Chester is not afraid to show his queerness and his style and shop in the women’s department,” costume designer Shirley Kurata tells Bustle.

Genera+ion, premiering March 11, follows a group of friends as they navigate high school life in Southern California. To capture their Gen Z style, Kurata turned to the mall for the bulk of her inspiration, sourcing pieces from stores like Forever 21 and Urban Outfitters while mixing in finds from thrift stores and flea markets around LA. Since the show takes place in a public school, most of the characters don’t have the money to dress extravagantly, meaning their clothes are a far cry from Gossip Girl-esque excess. “I didn't want them to wear head-to-toe designer,” Kurata says. “I wanted to keep it as real as possible.”

Chester’s wardrobe, which Kurata designed with Ezra Miller and Jaden Smith’s gender-fluid sensibilities in mind, is a mix of feminine silks and neon colors that he’s never afraid to power clash. On the other end of the spectrum, Naomi’s (Chloe East) conservative upbringing has influenced her Brandy Melville dressing room attendant meets VSCO girl vibe. In Genera+ion, clothing is used to stand out, to blend in, to feel grown up, to rebel or to seduce. Chester’s fearless sense of style is the first thing Nathan (Uly Schlesinger) admires about him and later tries to emulate. Greta (Haley Sanchez) dresses up in hopes Riley (Chase Sui Wonders) will like her romantically.

To ensure she got the wardrobe right, Kurata scoured Depop, TikTok and YouTube to figure out what suburban teens are wearing right now. She settled on a mix of ‘90s nostalgia and Y2K accessories, drawing inspiration from pop culture like RuPaul’s Drag Race and Gwen Stefani’s No Doubt era. It also helps that the show was written and co-created by Zelda Barnz, an actual teen who was 18 at the time the pilot was filmed. “We’d ask her, ‘Does this seem right? Does this seem like what your classmates would wear?’”

The collaboration between Barnz and Kurata helped the Gen Z authenticity of Genera+ion’s storylines extend to its clothing. “It’s one of the universal things of a teenager, trying to break free from all these rules and regulations,” Kurata says. “It is a mixture of rebellion and self-expression.” What better way to describe a teen show made by an actual teen?