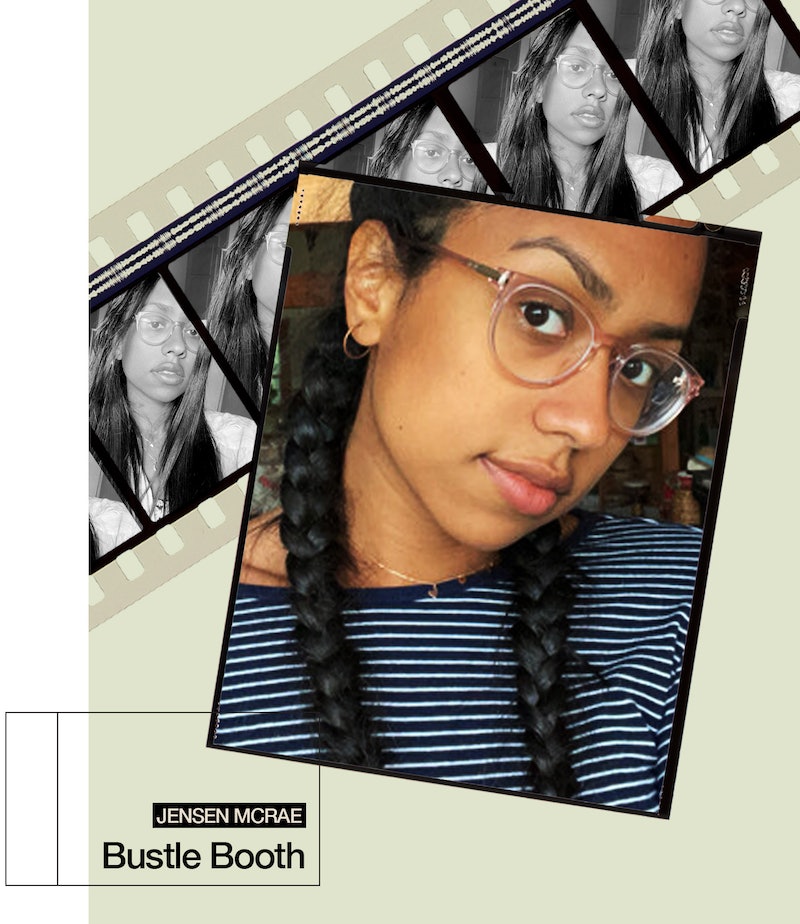 In January 2021, Jensen McRae dashed off a tweet about a hypothetical COVID-era Phoebe Bridgers song. She imagined the indie singer waxing poetic about hooking up in the vaccine line at Dodgers Stadium. It was a joke. But McRae received an overwhelming response: 44,000 likes, thousands of retweets, and adoring comments from the likes of Best Coast and Busy Philipps. McRae, a singer-songwriter herself, quietly retreated to her parents’ house in Los Angeles to freak out. She'd never received this type of public response before. Should she write the song? She did some deep breathing, listened to Corinne Bailey Rae's debut album, and finally calmed down.

Two weeks later, she released a full version of the once-hypothetical song, which she titled "Immune." It's since amassed over 5 million views on Spotify. “I love the song that came out of it, but that 36-hour period was just really scary,” McRae tells Bustle.

This week, McRae is back with her first album titled Are You Happy Now?, which functions essentially as part two of her June 2021 debut EP, Who Hurt You?. Whereas the latter was about coping with the pain of growing up, this album is about what happens when you realize your dreams are within reach. “I feel detached from positive things,” says McRae. “The outside world will see them and say ‘You must be so happy, this must be so great for you, you finished college [and] got these wonderful things,’ but inside, [I was] still the same scared little kid.”

The 24-year-old folk musician got her start singing for tiny crowds at famed LA open mics like the Hotel Cafe and The Cork Room. It was in these rooms she honed her craft and debuted her breakout single in 2019, called “White Boy,” which talks of being willfully ignored by a white boy at a party. Her incisive lyrics capture the reality of being a woman of color in predominantly white spaces. It’s a sensation she knows intimately. Over the last few years, McRae has often been the only Black woman at open mics and singer-songwriter showcases, and definitely the only Black woman singing folk music on the bill.

“We are not given the same attention or praise that white men and women receive, because people get confused as to why we are making music in that genre,” says McRae, who lauds the work of folk musicians like Joni Mitchell and Bob Dylan. “When I did get comments after a show it would be, ‘You sound like Phoebe Bridgers but with more soul,’ which is just another way to say I’m Black.” She is hopeful that open-mic culture is changing slowly, but until it does, McRae will keep writing about it and making sure everyone knows that folk is a genre for everyone, and especially for girls that look like her.

Learn more about McRae in her Bustle Booth questionnaire, below.

Virgo sun, Sagittarius moon, Cancer rising. An intense chart, there is a lot going on.

My favorite movie is Back to the Future Part II, and I often reference: “Roads? Where we are going we don't need roads!”

The Bachelor Presents: Listen to Your Heart. I think I was scouted for it.

“Gold Digger” by Kanye West. I feel uncomfortable singing at karaoke. I think it is rude if you are a professional singer to sing at karaoke so I have to rap, and that is the song I know all the words to.

I just read Priestdaddy by Patricia Lockwood. I am just so obsessed with her writing and I feel like it is going to seep into my writing. I also have started listening to more R&B, I randomly needed to listen to Summer Walker and I got really into her. My friend Maisie Peters put out her album [last year] and I listened to that a ton. The new Kacey Musgraves album is great. I listened to Golden Hour a lot when I was making the songs on my EP.

I hope they say, “Oh my God, she is so sweet and so funny. She is like sunshine, she is a light, she lights up the room.” I don't know if I do, but I hope I do.

More like this
Jillian Mercado On Representation In The Metaverse
By Erin Stovall
Meet The Rugby World Cup Breakout Star Making The Sport More Inclusive
By Shahed Ezaydi
In Pop Culture, Female Journalists Are Finally The Main Character
By Jenny Singer
J. Lo Just Announced A New Album — And Ben Affleck Inspired At Least 1 Song
By Stephanie Topacio Long
Get Even More From Bustle — Sign Up For The Newsletter