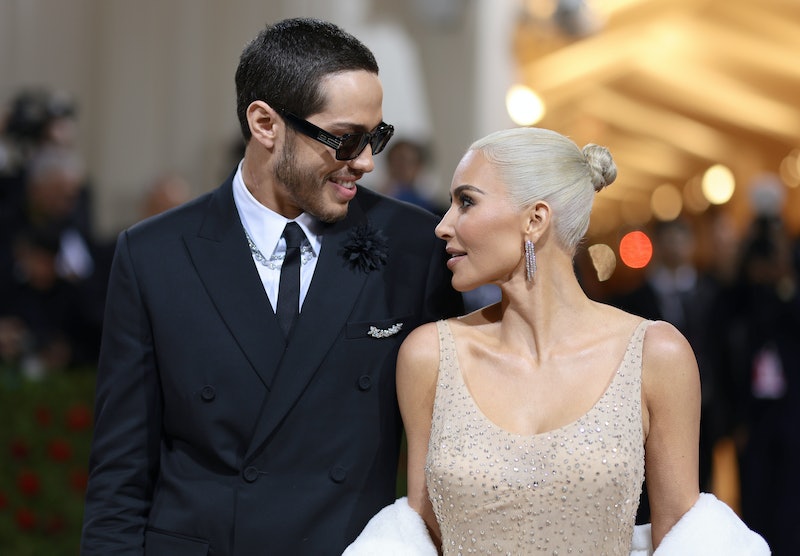 Kim Kardashian and Pete Davidson broke up, E! News reports. Sources close to the couple told the outlet on Aug. 5 that distance and busy schedules “made it really difficult to maintain a relationship.” A representative for Kardashian declined to comment to Bustle at this time.

None of the KarJenners have responded to the news — say Bible, someone! — but according to E!, the split happened this week and the exes still have “a lot of love and respect for each other.”

If the news comes as a surprise, you’re not alone. Just two months ago, Kardashian shared romantic snaps of the pair on a tropical vacation, which People revealed was in Tahiti. At the time, the SKIMS founder even praised his photography skills, writing on her Instagram story that “he passed the content taking boyfriend test.” And as Bustle columnist Sophia Benoit pointed out mere days before the breakup news, the couple’s relationship marked a new, more open era of sexuality for Kardashian, who in a Season 2 Kardashians teaser excitedly asked Davidson if he’d like to take a “really quick” shower with her. The Saturday Night Live alum happily obliged.

The Kardashians Season 2 premieres very soon, on Sept. 22, so it seems unlikely that the breakup will feature heavily in the new chapter unless producers work their magic to edit in the split. Season 1 will always serve as a behind-the-scenes relic of Kete’s early relationship. It all started with Kardashian’s Oct. 9 SNL episode, during which the couple shared their first kiss. They were in character as Jasmine and Aladdin, but there was something more to that smooch. “When we kissed, I was just like, ‘Hmm!’ It was a stage kiss, but it was still, like, a little zing, you know?” Kardashian dished on the Not Skinny But Not Fat podcast in April.

Relationship rumors first started to swirl in late October, when Kardashian and Davidson held hands on a Knott’s Berry Farm Halloween date. Kardashian had made the first move, asking an SNL producer for Davidson’s number, she revealed on her family’s Hulu show — and the rest is history.

The buzzy relationship formed months after Kardashian and Kanye West’s divorce process began in early 2021, but if you were wondering if Kardashian and Davidson’s split has something to do with Ye, that doesn’t seem to be the case. Though the three have definitely gone through their share of drama over the past 10 months, E! reports that “the divorce is moving ahead with Kanye,” and he and Kardashian “are happily co-parenting.”