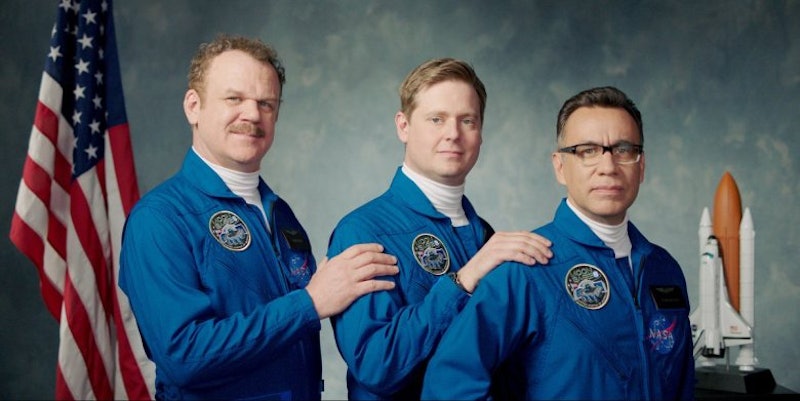 It's not uncommon for a new sitcom to feature one big-name comedy star in the lead role. Whether you're looking at Larry David in Curb Your Enthusiasm, Julia Louis-Dreyfus in Veep, or Steve Carell in The Office, sitcoms that build their casts around a solitary comedy icon are a dime a dozen. What's far less common is a sitcom that features three legends of comedy as its co-leads. Luckily, that's exactly what you get with the cast of Moonbase 8. The new Showtime series about "three subpar astronauts living in NASA’s Moon Base Simulator in the desert with high hopes of being the next chosen to travel through to the moon" stars a trio that could be described as a comedy nerd's dream team.

The series was created and written by the quartet of Fred Armisen, Tim Heidecker, John C. Reilly, and Jonathan Krisel. Krisel directs the series, while Armisen, Heidecker, and Reilly all star. The three actors are all comedy heavy hitters with some seriously impressive résumés, which should lead to a hilariously entertaining show. Here's everything you need to know about the comedians and their characters.

Armisen first came to fame on Saturday Night Live, where he was a cast member from 2002 to 2013. On the long-running sketch series, Armisen notably portrayed former President Barack Obama and created memorable characters like drummer Mackey and singer Garth. Along with SNL, Armisen co-created (with Krisel and Carrie Brownstein) and starred in the Peabody Award-winning sketch comedy series Portlandia, which aired from 2011 until 2018. The series skewered hipster culture and the city of Portland, Oregon. Since 2014, Armisen has intermittently appeared as the band leader on Late Night with Seth Meyers, and most recently, he co-created and stars in the HBO series Los Espookys, a Spanish-language comedy about a business that creates horror movie-like situations in real life for its customers.

In Moonbase 8, Armisen plays Skip. Showtime describes the character as "living in the shadow of his legendary astronaut father" and trying to "carry on his legacy with the same name but with far fewer qualifications."

Of the three, Heidecker may be the least known among the general public, but he is a god among the Adult Swim set. Half of comedy duo Tim and Eric, Heidecker is responsible for popularizing the surrealist anti-comedy style that came to dominate the late night TV network in the 2000s. With Eric Wareheim, Heidecker co-created the avant-garde comedy series Tom Goes to the Mayor, Tim and Eric Awesome Show, Great Job!, and Tim & Eric's Bedtime Stories. Heidecker also works in film, starring in Tim & Eric's Billion Dollar Movie and appearing in Bridesmaids (remember Lillian's husband, Dougie?), Vacation, and Ant-Man and the Wasp.

In Moonbase 8, Heidecker plays Rook, who sets out on a "holy mission to spread the gospel throughout the universe – one expedition at a time."

It may come as a surprise to those who know him as the "shake and bake" NASCAR driver from Talladega Nights: The Ballad of Ricky Bobby, but Reilly actually began his career as a dramatic actor — and still appears in plenty of dramas. But of course, he's most known for his comedy work. After collaborating with producer Judd Apatow and starring in alongside Will Ferrell in the 2006 hit, Reilly reunited with Apatow to star in the vastly underrated Walk Hard: The Dewey Cox Story. In 2008, he joined forces with Ferrell and Apatow again to star in Step Brothers. Around the same time, Reilly began appearing alongside Heidecker on Tim & Eric Awesome Show, Great Job! as the socially awkward Dr. Steve Brule. He then co-created and starred in the spinoff series, Check It Out! with Dr. Steve Brule. On top of all that, Reilly is also known for voicing the lead character in both Wreck It Ralph films.

In Moonbase 8, Reilly plays Cap, a character who is desperate for a chance to be a real leader. According to the Showtime description, Cap is "a deadbeat dad" whose marriage was a failure and whose business folded. "For Cap, this is more than a chance at space travel… it’s a moonshot at redemption."

Given their history of playing offbeat characters that inspire true belly laughs from viewers, the combination of Armisen, Heidecker, and Reilly in Moonbase 8 is a comedy nerd's dream come true.