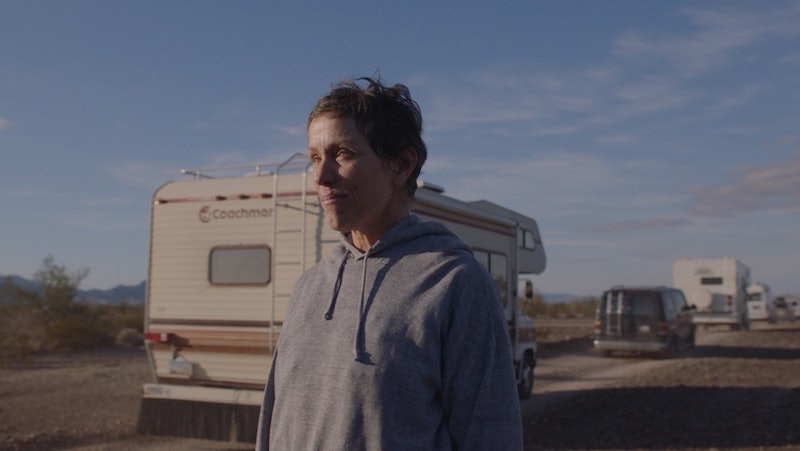 When the 2021 Academy Awards finally take place this April, Frances McDormand stands a real shot at becoming just the third actor in history — and the second woman — to win three Best Actor/Actress Oscars. If she does so, it will be thanks to her performance in Nomadland, the critical darling that's expected to do very well come awards season. McDormand plays Fern in the film, a widow who loses her factory job and decides to become a nomad, traveling the American West and working various odd jobs. And when you look at where Nomadland was filmed, it becomes obvious that this was no ordinary film production.

The movie takes place across a number of Western U.S. states, and that's not an example of movie magic. Nomadland was actually filmed on the road and largely in secret, with members of the cast and crew — including McDormand and writer/director Chloé Zhao — spending at least part of the four-month-long production living out of vans like the characters in the film, according to IndieWire. Filming took place across a total of five states, according to Condé Nast Traveler: South Dakota, Nebraska, Arizona, Nevada, and California. These states were used for more than just their scenery, though. Zhao cast a number of actual nomads and local workers as actors in the film, lending a unique sense of localized authenticity.

Also contributing to this realism was McDormand, who worked actual hours at some of her character's jobs in towns that were filmed along the way. The two-time Oscar-winner harvested beets in Nebraska and worked in a warehouse in California, according to The New York Times, and The Los Angeles Times also notes that she spent time in the campgrounds of South Dakota’s Badlands National Park, where she picked up trash. Another national park, California's Redwood National Park, plays an important role in the film, as do two towns that Zhou considers the film's "anchor," according to Condé Nast Traveler. Empire, NV is one of them, and it's where Fern leaves from at the start of the film. The second is Quartzsite, AZ, where she begins her new life's journey. Quartzsite is the home to the nomad gathering Rubber Tramp Rendezvous which, you guessed it, was filmed for the movie. The gathering's founder, nomad Bob Wells, also appears in the film.

Road movies are a dime a dozen, but you'd be hard-pressed to find one more authentic than Nomadland. Not only does the movie actually film in the areas in which it takes place, it also includes real people from those areas as characters. And at the heart of it all is McDormand putting in perhaps her most honest performance ever. Here's hoping she's got some room on her shelf for that third Oscar.