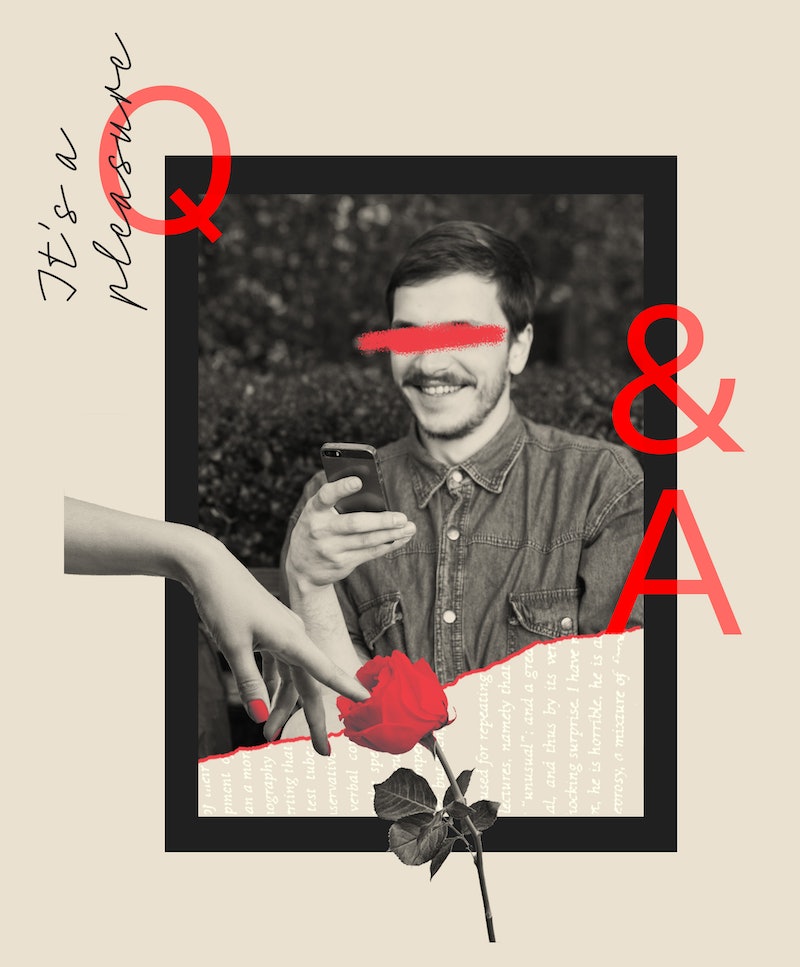 Vertikala/Stocksy
By Sophia Benoit
June 23, 2022
It's A Pleasure

He still lives with her (in separate rooms). He can't talk too much at home as she sometimes comes and knocks on the door to tell him that she doesn't want to hear us talking. He doesn't want her to feel bad, so he sometimes calls me while going home and then hangs up before entering the house. He’s moving out soon, but I can't stop worrying that he would like to keep in contact with her and be close to her without giving himself time to heal. He told me that he feels sad because she said she won't be visiting him in his new place. A part of me wants to run away from this relationship, and a part of me wants to stay and see where it goes, but the triggers and worries are diminishing my mental health. Do you have any suggestions? I generally have trust issues at the beginning of a relationship and I have never been with someone with unfinished business, as my previous partners were all practicing monogamy.

A: I think you already know the answer to this, and that the answer sucks. I say this because of one specific clause you wrote: “The triggers and worries are diminishing my mental health.” There’s no relationship on Earth that is worth enduring damage to your mental health.

Now, there are, of course, events that occur in a relationship that might ding our mental health. There are big-picture events like your or your partner’s health changing drastically. Or one of you losing a job. Or struggling with fertility. There are also smaller events like one of you having a crush on a co-worker or your partner buying a big-ticket item without you both agreeing on it or them generally being a butthead one day that might also alter how well you’re doing. It’s not that your partner is going to have zero effect on your well-being. Of course, they will! The hope, however, is that if you had a ledger where you could magically see if being around a person made you feel better or worse, they’d come out in the black. But if the relationship itself is making your overall mental health suffer, that is the reddest of red flags.

Personally, I think you’re worried with good reason! This seems like an unfortunate beginning to a loving, trusting relationship. The start of a relationship should be fairly easy, to be honest. It should be easy to love someone early on before you get to the really hard stuff like your basement flooding, your dog dying, and your mother-in-law meddling in your sex life. This is the time when love should flow like honey. Right now your love is working about as well as a McDonald’s ice cream machine. Let me walk you through all the reasons I think you should be worried.

I’m very much supportive of non-monogamy in its many and varied forms. Monogamy isn’t the one right way to have a relationship! I don’t think any of the issues stem from polyamory itself, however, I do think how your partner has handled his relationships is and was pretty sh*tty. Firstly, it’s not great that you felt emotionally abused by his primary partner and that he stayed with her (and you). He’s obviously not responsible for his ex-primary partner’s behavior, but it certainly seems like that wasn’t an immediate deal-breaker for him, since you said “sometime later” they took a break and that he eventually decided to end things. If my partner were emotionally abusing another one of my partners — or anyone — that would be an instant deal-breaker. Them just being mean to someone would be a strong and hard no.

Of course, I’m not entirely sure what he knew — maybe he knew nothing about how she treated you. But that scenario also concerns me because it means that you didn’t feel like you could comfortably communicate with him. If you feel you can’t be honest with a person, that’s not a good candidate for partnership. Then, after this, he continued to live with his ex-primary partner, which is understandable and often unavoidable for financial and logistical reasons. He does not have to, however, stay close to her! You can be a cordial roommate with an ex until the lease is up without maintaining close contact. On top of still speaking to her, he’s clearly prioritizing her comfort and needs above yours. Now, probably that’s because he feels guilty for “leaving” her and “picking” you. (I’m putting those in quotes because that’s probably the framing he’s using in his own guilt-head because it’s the least generous framing. He absolutely needed to break up with her.) If there had been nothing else in this letter other than him not talking to you on the phone when he’s at home, I would have suspected this is a nice guy who is trying to make his ex feel as little pain as possible before he moves out. BUT NO! This is an emotionally abusive (to you) ex of his and he’s telling you that he feels sad he’s not going to be able to see her as much after he moves out. He shouldn’t be seeing her at all! Zero times! Maybe one time to grab his lucky Spongebob boxers he accidentally left at her house, and that’s it! He should not be wanting to see this person, and if he does, he certainly should not be expressing that desire to you or acting on it. He should be eager to cut this person out of his life.

He’s a messy, messy person, who’s behaving as if he has no control over his life and actions. He’s refusing to set or enforce boundaries that would help him or you or your current relationship. On top of that, he’s jumping from one relationship to the next without pausing to assess what might have gone wrong in the first one and what might need to change. I don’t have good things to say about people who cannonball from one relationship right into another. It almost always portends disaster.

I think that all of what you put in your letter is him showing you exactly who he is — and I think you should believe him. You should take him at his words and actions and trust that he will continue to talk to and care about people who hurt you. Which, by the way, is bad. You don’t ever need a reason to break up with a person, but you have plenty.

More like this
Is It Bad That I'm Not Interested In Sex Or Dating Right Now?
By Sophia Benoit
How Do I Deal With Both ED & Premature Ejaculation?
By Sophia Benoit
Is It A Rebound Relationship Or The Real Thing?
By Carolyn Steber and Lexi Inks
12 Ways You're Sabotaging Your Love Life
By Teresa Newsome and Lexi Inks
Get Even More From Bustle — Sign Up For The Newsletter