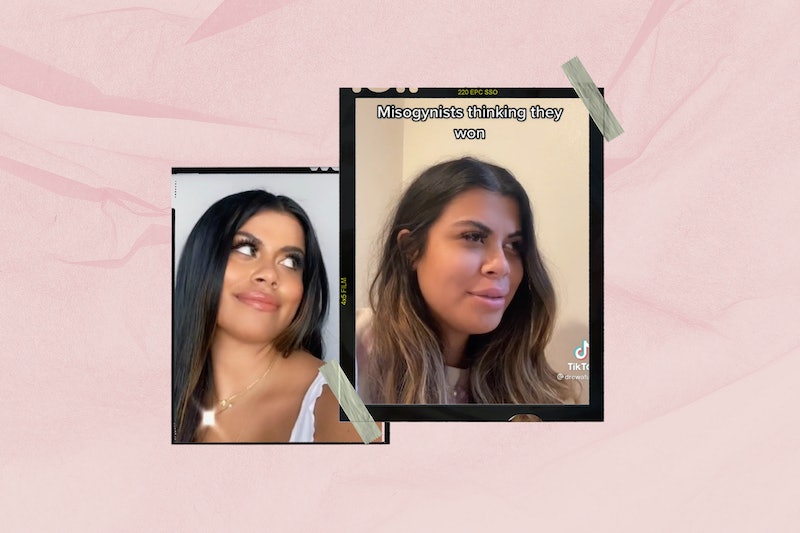 In the wild world of TikTok, you’re likely to find any topic or content type imaginable covered on your For You page. Comedians, musicians, influencers, strippers, and even beekeepers have all made their way into major notoriety on the app for anyone to enjoy. Scrolling through your FYP can bring hours of entertainment, inspiration, and information, because — let’s be honest — many of us have found ourselves having spent a few hours on the app.

But it's no surprise there’s also been various forms of hateful content circulating on the app, too (though TikTok tightened community guidelines in February). In response to these videos, creators like Drew Afualo (@drewafualo), aka TikTok’s “crusader of women,” have built a platform on fighting back. Thanks to her hilarious takedowns on misogynistic videos, the 26-year-old from California quickly amassed over 7 million followers since joining the app in 2020.

While the men featured in her videos tend to clap back against her jokes, Afualo takes the negative comments in stride. “As I've grown older, I've just become more convicted in the belief that I'm the best version of myself, and that's always going to be good enough for me, so it should be good enough for everybody else,” she tells Bustle. For her followers, that self-esteem translates into plenty of sage dating wisdom.

On the heels of her new podcast, The Comment Section With Drew Afualo, where she chats with famous guests like comedian Brittany Broski about misogyny, relationships, and empowerment, Afualo shares her best advice for diving into the dating pool with confidence.

Your followers are often impressed by how well you laugh off the retorts from the men featured in your videos. Where would you say your confidence came from originally?

It sounds kind of cliche to say, but I was born like this. If you ask my mom, I've always walked like my sh*t don't stink. I think my mom, and older sister as well, have both been paramount figures for me to look up to. They've just inspired me. My mom always raised us based on independence, confidence, and understanding that you could be the prettiest, most in shape, conventionally attractive girl in the world — and there's still going to be somebody who doesn't like you for whatever reason.

So when you make your peace with that information, it can’t hurt you anymore if people don't like you or have something negative to say about you. I've just always been so goal-oriented and ambitious so I’ve never really paid attention to what other people are doing and saying, whether it's negative or critical. I've just always been that way.

What’s your advice for people who struggle with confidence in dating?

Know that you are one of one. There’s literally nobody else like you in the world, and that’s the most unique thing ever. Knowing that, and also knowing that life is way too short to spend it worrying about what other people may think of you, you’ll understand that anyone would be lucky to have you. So hold onto those facts, know you are valid and worthy in or out of a relationship, and keep those standards high. Someone will meet them, I promise!

You're pretty outspoken against fat shaming on TikTok. Do you consider yourself a proponent of body positivity?

Body positivity is good, but I'm leaning more towards body neutrality, which in essence just means your body just is what it is. It just exists. It has no bearing or reflection on you as a person, your character, your worth — nothing. It's just keeping you alive. I advocate more for body neutrality because your body, what it looks like, whether it conventionally meets the beauty standards or not should have no reflection on how people treat you and how they perceive you. A lot of times when I deal with body shaming, like fat shaming specifically, on TikTok, I always think what they fail to realize is that these "jokes" have real-life implications.

When I poke fun at a dude for being short and they're like, "Oh, you're just a body shamer too." The difference is they're not comparable at all because fat shaming works its way into every facet of life. Fat people in general are systematically oppressed. Comparing those two is like comparing getting a flat tire to getting run over. Both have to do with the car, but one is infinitely worse than the other. So when I talk about body shaming, I always try to advocate for body neutrality because it shouldn't matter what your body looks like.

Do you have any advice for people who struggle with their body image while they're dating?

The reality of this situation is those kinds of men who make [jokes about fat women], aren't getting dates. So don't worry about them. They're not in those dating pools. They're not getting matches. They're not getting likes. They’re quite literally making up this lore of like, "Oh, when fat girls approach me…” — they've never experienced that. Literally ever. It's truly like their imagination. It's a reflection of how they feel about themselves, so don't let that affect how you see yourself or how your confidence stands when it comes to dating. The really good people are not going to be like that.

A genuine person isn’t going to factor in what your body looks like. If they do, it's going to be like, "I think you look great." You don't have to prove your worth to someone who doesn't even see you as a human in the first place. And I say that all the time, you don't have to prove anything to men like that. Nothing. Let them go off and make jokes with all their friends.

What about making a first move — what’s your advice for anyone wanting to slide in the DMs, or shoot their shot on the apps?

Again, know that life is too short not to go after what you want. If you like that person or think they’re cute, go for it! You’re in no worse off position than you were initially. And anyone would be lucky to hear from you.

In person is a lot easier, in my opinion, only because you can interpret body language and tone a lot better than through text. So be confident, know you’re the baddest b*tch alive, and go after what you want. If they aren’t interested, their loss!

Do you have any mantras or pump-up songs?

I'm a huge fan of affirmations, so I say them all the time. I say them in the morning. I say them to myself in the mirror. It feels cheesy at first, but when you do it enough times, it really helps. Come up with some affirmations that you can recite to yourself in the mirror. Whatever the outcome, it doesn't matter because you’re still going to be amazing, wonderful, regardless of how this works out. Right? Then as far as music goes, Meg Thee Stallion works.

“Girls in the Hood” is a great song.

It's a great song to listen to when you're getting ready. Hyping yourself. You've got to remind yourself, like you said, that you are a bad b*tch regardless of another person. And I think that's what makes the best relationships is when you are so confident in yourself — with or without this person. You could be better together, but even if it didn't work out, you would still be just as confident and just as successful, just as happy and fulfilled in yourself because you’re someone outside of them. Someone that doesn't derive all their worth from them. That's what I think makes the strongest relationships when both parties are extremely strong outside of each other, and even better when they're linked up together.

Speaking of that energy, a huge part of that is knowing your worth. What are your standards when it comes to a potential partner?

My standards have always been non-negotiable, and some of the important ones are: our morals being aligned, kindness, respect, empathy, getting along/respecting my family, selflessness … the list goes on. But those are my big ones.

What’s your advice for people who struggle with knowing their worth in dating?

How do you know when to walk away from a partner or relationship?

It’s different for everyone because we’re all on our own journey emotionally. And relationships are so complex and intimate. But across the board, it’s when you don’t feel like fighting anymore. And that’s applicable in multiple ways. Fighting for your relationship, yourself, your partner. If you have no more drive or desire to fight for what you have, that’s how you know it’s time to walk away. Giving up is the mark of the absence of love. And although it can be tragic, it just means you weren’t with the right one.

More like this
What Is "The Ick?" The TikTok Dating Term, Explained
By Courtney Young
25 Questions To Ask Your Friends When You're Bored
By Lexi Inks
TikTok’s “5-9 Routine” Trend Is Here To Boost Your Productivity
By Courtney Young
15 Flirty "Thinking Of You" Texts That’ll Make Your Crush’s Day
By Lexi Inks
Get Even More From Bustle — Sign Up For The Newsletter