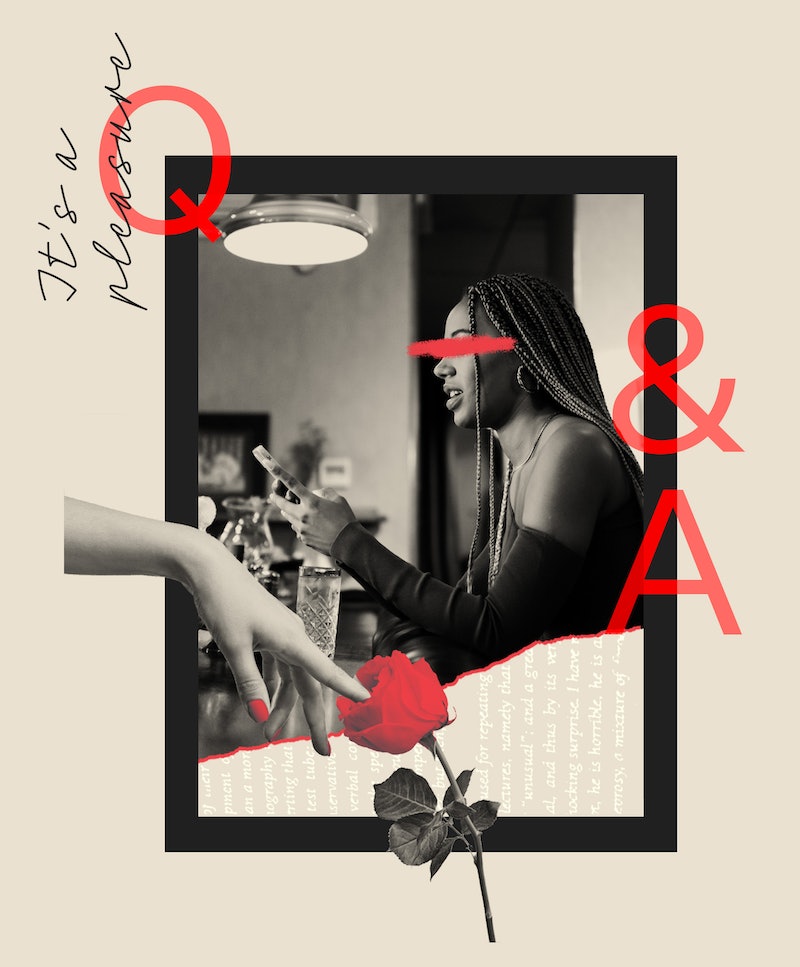 Kike Arnaiz/Stocksy
By Sophia Benoit
June 16, 2022
It's A Pleasure

Q: I'm 38 and unmarried, though I want to be in a serious relationship, and I worry I'm looking for the wrong things — but don’t know how to change! My last two relationships ended when my partners confessed to chronically cheating on me. The most recent confession led to a canceled wedding during the pandemic. I’ve been dating again for almost two years, and I’ve had a few relationships in that time, but either I haven’t felt equally into the (wonderful) person and we’ve mutually become friends, or the person I’m into can’t see the same type of future as I want. I’ve tracked my first dates in that time, and I’ve been on 35, most of which haven’t had a major spark — actually, only one has, with the guy who I knew wasn’t commitment-ready but there was a great connection. I think some of my friends despair at my search for that physical electricity with someone, but when I’ve tried to give space for it to build, I only end up leading people on a bit and then hurting them when it doesn’t develop for me. After initially pursuing only serious relationships, I’m at a point of allowing myself to hook up casually while trying to keep broadening my world to encounter new people and signing up for speed dating and online dating and whatever I can think of to let opportunity in. (I’m a busy, satisfied person in the rest of my life, very social and active.) But even online, I find myself instantly being drawn to guys who don’t want kids or are into ethical nonmonogamy (fine for others, but being cheated on by people who had an interest in it makes that a total trigger for me).

Is it wrong that I can’t just feel the way I want to feel physically with the very nice guys who aren’t able to get flirty or be bold and assertive with me the way I want? I tried to guide the last guy in that direction, and it didn’t quite work. Aren’t there, surely, guys I’ll click with physically who will also want to be together seriously? Or is it stupid and doomed of me to need that excitement? I read All About Love and bell hooks seemed to think women don’t prioritize sex over other needs; I don’t prioritize it over them, but I do need it to feel a little thrilled about someone and have butterflies. But it keeps failing me, and I’m getting dejected over it. It’s not hard for me to meet people, or to have guys interested in me, but to get everything in one package is frustratingly difficult, even though I see people who’ve found someone to marry and have a family everywhere around me. I find it horrible that I’m almost 40 and still seem to have the same relationship dynamics as in my teens and 20s. I love settling down with a person I’m into, and am so content when that’s happened; it’s just that those people were lying to me. It could just be bad luck, and I need to meet the right person — but then where are they?

A: Dude. Duuuude. Dude. There is so much here. I say this with love and tenderness, but I have quite literally never gotten a letter with so much… feeling. It was impossible not to feel your urgency, your desperation, your frustration, your anxiety. It was jumping off the page. Do you remember Sky Dancers? Those ’90s toys where you pull on a string and a little fairy doll spins really fast and then takes off into the air? You are giving Sky Dancer right now. I am Type A if there ever were a Type A person. I also have anxiety out the *ss (what my psychiatrist calls “severe anxiety”), so please believe me that I feel you. I get obsessing over outcomes. I get looking for patterns. I get existential woe. I know worry is not something you can just turn off. But I sincerely think you have to tone this down a bit for your own sake. As a gift to yourself. The problem lies not with you but rather with how difficult it is to find the one single person in the world who fills your heart with joy (to quote You’ve Got Mail).

There’s a word that I loathe to use because it has bad connotations that I don’t think it deserves — but I think you have become somewhat “desperate.” It’s fine to be desperate, by the way! There is nothing immoral about wanting something to the exclusion of all else. And the thing you want is love! It’s not pathetic, it’s not silly, it’s not shameful. But I do think it might not be giving you anything. You seem like a person who’s used to working really hard at problems and putting in a lot of effort and then seeing results. And let me tell you the most f*cked up thing about finding love: Effort and results are not proportional. You have to let go of that idea. You simply must find a way to absolve yourself of the sin of not finding someone. (Especially because you have found multiple people whom you would love to be with long term, whom you had chemistry with, whom you were at least once willing to marry! You have found those people! They were just also f*ckos.) Give yourself a god dang break! Please stop beating yourself up for other people cheating on you, not being ready for a relationship, or not being The One. Not only is it hurting you, but it’s not going to solve the problem! It’s like trying to fix a flat tire by hitting yourself in the head with a crowbar.

I am not not not not saying you should give up your search or abandon your longing for committed, stable, hot, and sexy love. Spicy monogamy is fantastic! But right now what you’re doing is a whole lot of trying to make anything work. You are tracking dates and speed dating and trying to run at this “problem” from every single angle. This isn’t an escape room or a difficult work client. Every attempt to “tackle” this is going to make you more exhausted and more frustrated. Despite what you may have heard, falling in love with someone is not a numbers game; it’s a waiting game. You could go on a speed dating event every single night for 14 years and then one day someone comes to your house to fix the grout in your bathtub and they’re the one. You have no idea where this person is; I have no idea where this person is; heck, that person doesn’t even know they’re your person! There’s no possible way to speed up the timeline.

You can — and probably will — be mad about that. It’s angering, sad, and it sucks sh*t. But it’s the truth. If you like being on apps, if you like going on first dates, if you like going to bars and hoping someone will pick you up, then by all means spend your time doing those things. If, however, you would have more fun drinking wine on a rooftop with your friends or perfecting “Teenage Dream” on harpsichord, please, good god, do those things instead.

This is your life right now, whether you have a romantic long-term committed and hot partner. I know you say you’re satisfied in other areas of your life — fantastic! Go to places where you are satisfied and bathe in how good they are. You can be bummed about your love life, too. There’s plenty of time for that. And if you give up trying so hard to date as much and as fast as possible, I bet there will even be extra time for that. When you do meet the person you next have long, committed love with you will be so happy that you spent your time with friends doing things you loved rather than on another speed dating night with a guy who had spinach in his teeth the whole time who couldn’t stop talking about his show poodles.

Now, I do want to address the “Am I looking for the wrong things?” part of your letter. The part where you’re worried that everyone is either boring or a cheater f*ckboi. There are two sides to this, twin truths about serious relationships. The first is that you absolutely deserve to (and will) have hot, hot chemistry with the person you are with. Attraction is a very reasonable demand in a relationship. You should be excited to be with them! That said, long-term love is often dull, especially when you’re comparing it to banging in a bar bathroom. I’m sorry, but it’s the truth! Committed relationships are magnificent and worthwhile, but it doesn’t (or shouldn’t) come with the anxiety that makes early love feel so thrilling. Because genuinely, the “excitement” of early love, the thing we’ve all been calling “chemistry,” is usually just the anxiety of whether someone likes us back or not. It’s the reason we feel so attracted to people who give us nothing, who ask us to impress them — anxiety feels like a thrill, like a challenge, like sexual energy. It’s not though. Or if it is, that feeling fades when you make a life with someone and they keep showing up and they’re dependable and loving, all of which are necessary for getting married and having kids. It’s not that wanting marriage or kids is for boring and unsexy people! It’s that what makes marriage and kids possible is a degree of stability, and unfortunately, stability isn’t as hot as excitement, unpredictability, and danger.

Desire is based on wanting something and stability is based on knowing you have something. (I recommend reading and listening to the work of Esther Perel, who talks about this brilliantly.) Do you see how those two things can often be at odds? That doesn’t mean that you aren’t going to be sexually into your partner after six years. That doesn’t mean that people in marriages aren’t having spicy sex. They are! It’s just not predicated on the type of wild “passion” that comes almost automatically in a new relationship. It’s work to keep things exciting and new with a person you’ve been with for a while, and yes, sometimes long-term love is going to feel like eating oatmeal instead of eating Pop Rocks. But sorry, no one wants to eat Pop Rocks for breakfast every day.

More like this
Is It Bad That I'm Not Interested In Sex Or Dating Right Now?
By Sophia Benoit
How Do I Deal With Both ED & Premature Ejaculation?
By Sophia Benoit
Is It A Rebound Relationship Or The Real Thing?
By Carolyn Steber and Lexi Inks
7 Women Share Their Best Orgasm Stories
By Lexi Inks
Get Even More From Bustle — Sign Up For The Newsletter