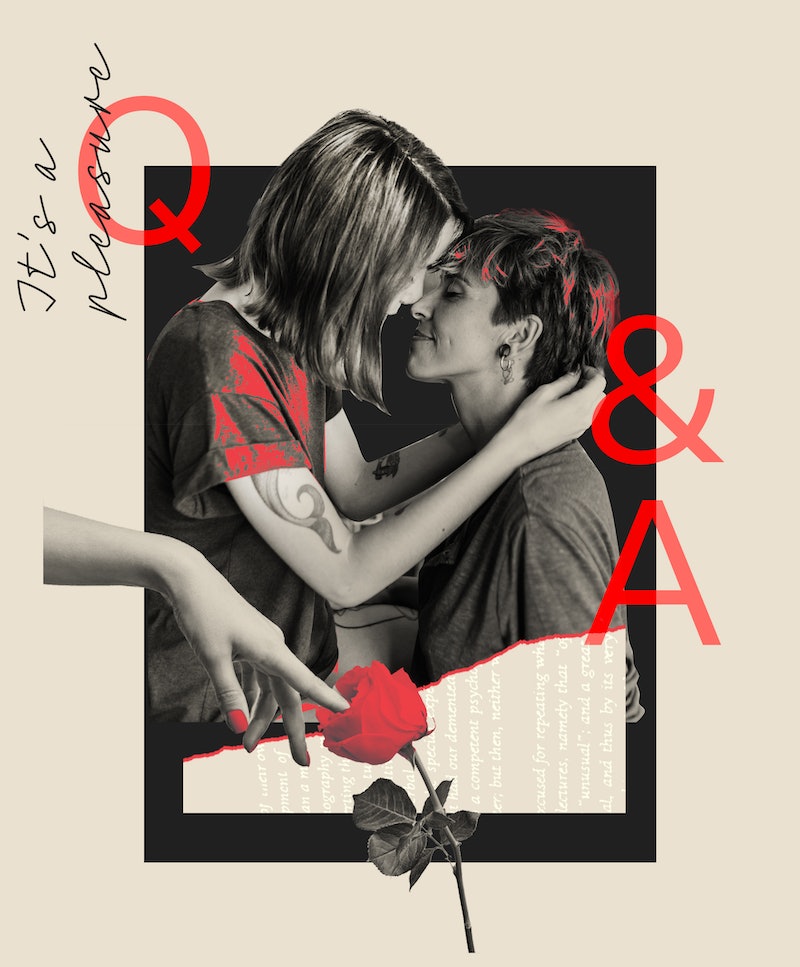 I’m just beginning a new relationship with someone I really like, but I still feel some anxiety around sex. I’m not really used to being with someone who actually cares about my preferences, and I’m having a hard time expressing what I want or need in bed. It’s normally very easy for me to express my feelings in a brutally honest way, but I still feel so awkward translating that to the bedroom. It shouldn’t be this hard to say what I want, right?

Shy in the Sheets

Dear Shy in the Sheets,

I believe that there exists a mathematical phenomenon where most people are below average at talking about sex, even if they’re good at having it. (Please don’t explain statistics to me.) Talking about sex is fraught as all hell outside of the bedroom, which is to say nothing about expressing your preferences when you’re actually boning. Sorry for saying boning.

It’s decidedly difficult to spend the formative years of our lives being told “butt” is a bad word and to then turn into someone with no shame around bodies or sexuality. I don’t know what your sex ed classes were like, but in my school, one gym teacher made everyone in her class yell out words like “penis,” “vagina,” “clitoris,” etc. I’m not sure the exercise removed shame for anyone in that class — mostly it seemed like something they giggled about later in the hallways — but it says a lot that part of my peers’ sexual education was just saying words for body parts.

My point is that for many of us, this shame runs deep. People get weird about babies running around naked! So it makes sense that you aren’t necessarily ready or able to spout off all of your sexual desires eloquently, even if you’re dating someone you really like. Even without the baked-in shame around sex and sexual desire, most of us don’t have much practice talking dirty. How often do you think you’ve said the words “I want your fingers inside of me now” to someone? Probably not that often! Of course you’re not exactly an expert at expressing yourself in bed.

The truth is, most of us aren’t very good at being direct about what we want. You say you are, but I bet getting to that point took a lot of practice. Most of us, especially women and femmes, are socialized to do the exact opposite. We’re often incredibly good at deferring to what makes other people feel more comfortable. Often, this is for safety reasons (physical safety, emotional safety, social safety, etc.); the stakes of being dismissed or ignored for us are frequently higher than for a cis guy. On top of which I think we’re all pretty familiar with people not listening to us, and it’s heartbreaking when it’s someone we actually like or love, so sometimes we don’t want to ask for something in case that person disappoints.

So since this is something you’re good at, perhaps it’s an entry point for you to get better at sex talk. Think about the places where you’re the best at being, as you say, “brutally honest.” What makes you feel safe there? What do you value so much that you’re willing to be a bit uncomfortable to get what you want? What’s different about the bedroom?

Keep asking yourself questions to see if you can work backward to your specific hang-ups in bed. Is it about how you want your partner to think of you? Do you perhaps have negative opinions toward women who ask for things during sex? Are you simply uncomfortable saying certain words and phrases? Is there an experience in your past that has made you believe that dirty talk or asking for what you want is shameful?

This whole process should be a bit like a dance class — a little uncomfortable but fun. You’re learning what your body likes and can do, what feels good and what turns you on. This should feel exciting, not limiting or embarrassing. You don’t have to have all the answers to what gets you going immediately. In fact, there probably are very few concrete, unchanging “answers.” What turns you on with one person or on one day will not stay the same. You don’t have to know for sure before you try something that you will orgasm from it. (You don’t even have to orgasm at all for sex to be enjoyable!)

I’m going to recommend something extremely corny, which is a very common thing for me to do, but sometimes helping your brain rewire itself requires corniness. Practice dirty talk out of the bedroom without a partner around. When I started writing about sex publicly, I felt a knee-jerk kind of juvenile embarrassment whenever I would have to utter sex words. (There is a part of my brain that will always laugh at the word penis, but that’s because it’s a silly word.) I knew I needed to get over myself for professional reasons, but I also found it ridiculous that I was embarrassed to say these words as an adult. I didn’t feel like I found them shameful, but clearly I had some lingering... issues... around sex. So I started to say “dirty” words and sentences out loud in my car during my commute. I started saying them with the music on so that I didn’t have to hear myself say “I want you to come inside me” into the silent void of my 14-year-old Prius. I made myself say words and phrases unapologetically until I didn’t flinch or pause anymore. And, yes, I felt foolish sitting in traffic saying “pussy” over and over again. But I decided I’d rather get my embarrassment out in my car alone than work through it when the stakes were higher.

When it does come time to bring your practice into the bedroom, start where you are. You don’t need to become The Most Filthy Dirty Talker or the Bossiest Sex God or Most Direct Sex Communicator in order to try something out. Start with what you’re a little uncomfortable with and stretch from there. “I want you inside me” or “slower” or “more” or “I want to taste you” are pretty mild, all things considered. You are not going to shock or scandalize your partner by saying any of those things.

From there, you can work your way up to asking for different things or things that make you a little less comfortable. You can also sit down outside of the bedroom at some point (perhaps over a bottle of wine) and talk about sex while clothed. Talk about what you’re into, what you’ve always wanted to try, what you think is overrated, etc. I know the general wisdom is that if you can’t have very frank conversations about sex with someone, then you’re not ready to have sex with them, but if everyone followed that rule, there would be very little sex happening. That threshold is certainly ideal, but most couples seem to have sex first and then talk later. It’s OK! We’re all doing our best. There are even apps and websites people have made where you can both fill out your preferences and then the app will tell you the things you both said you were into. (Kindu is a popular app for this, but websites like Carnal Calibration and Sexionnaire also work well.) This is all a process. You are not expected to be an expert at it right away. It’s going to be uncomfortable and might even feel embarrassing at first, but the more often you do it and realize that your partner is appreciative and receptive rather than horrified or judgmental, the more comfortable you’ll get voicing your desires. (Of course, you’re not going to be with someone who would be horrified or judgmental about sex preferences.)

Work up to it slowly, and don’t judge yourself for not being amazing at asking for what you want. Figure out what it is that you do want to ask for, look for entry points that you are comfortable with, and be unafraid to make a fool of yourself. Good sex requires vulnerability and practice.