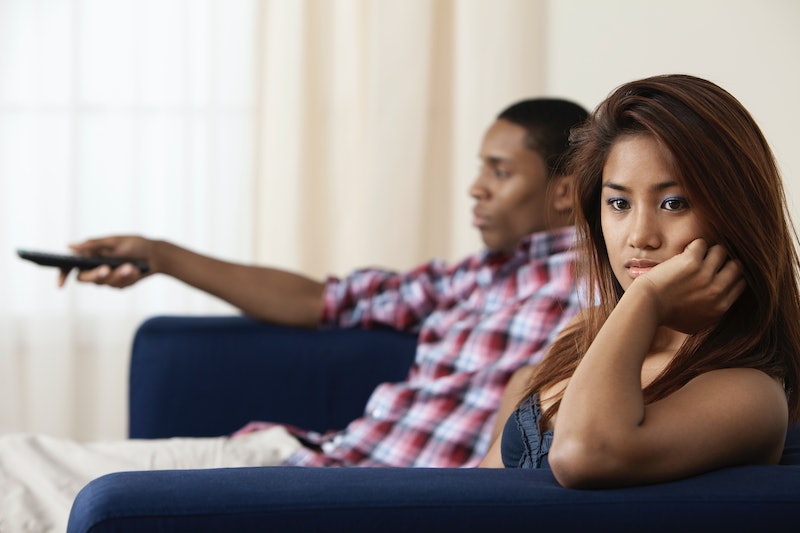 In Never Have I Ever’s second season, Devi Vishwakumar finds herself in a divisive love triangle rivaling the trope’s favorites, like Twilight’s Bella/Edward/Jacob mess or, more recently, Sex Education’s Eric/Adam/Rahim situation. The Netflix protagonist lands between a popular, nice-guy jock and a fellow try-hard nerd. But she’s more of an anti-hero than Bella and Eric, and unable to think about anyone other than herself. Long story short: Devi makes a mess of everything. (Granted, she’s a teen getting over the sudden death of her father, so some selfishness is allowed.) But if you watch the way she treats her suitors and it feels familiar, it’s possible your partner is as selfish as she is.

“If you don’t feel seen, heard, or valued, or that your partner respects you, then they are not meeting your needs, and you have every right to question why your needs are not being met,” says Sarah Louise Ryan, a UK dating and relationships expert.

A 2017 literature review found that while giving to our loved ones can increase happiness, self-esteem, and self-efficacy, a ceiling exists. According to the study’s authors, “Giving is not universally good for health, well-being, and relationships [and] when the circumstances of caregiving are excessively burdensome … caregivers can suffer.”

If your partner’s selfish behavior is negatively affecting you, don’t throw in the towel just yet. A healthy relationship should have room for growth and improvement. Below, experts offer seven tips for responding to a selfish partner.

1. Work Toward Your Own Happiness

If you’re dealing with a selfish partner, chances are you’ve gotten used to deprioritizing yourself and your needs in favor of theirs. Start by identifying what you need to be happy. “We get one life, it is very short, and it’s so precious,” Ryan says. “We deserve happiness. How do I want to feel in a really fulfilling, loving relationship? What does it look like when I am seen, heard, trusted, and respected in a loving relationship? Connect with that, manifest it and feel the way you’d like it to feel.” She suggests journaling as a way to pinpoint what you want in a relationship.

2. Communicate Your Needs To Your Partner

According to therapist MoAndra Johnson, a healthy relationship has room for individuality — but not at the expense of each other. “It’s important to advocate for yourself and have individualism outside of the relationship, but ultimately you should be working for common goals and understanding,” she says.

Don’t go straight into an argument, Johnson says. She recommends using “I” statements, which mean starting sentences with “I.” (For example, instead of saying “You didn’t ask me about my day,” try “I feel hurt that you don’t check in with me.”) This focuses on the impact of your partner’s behavior, rather than blaming them. “It gives your partner an example of taking ownership of what happened,” she says.

3. Be A Bit Selfish Yourself

“Saying no to things that aren’t serving you lets you say yes to yourself,” Ryan says. She suggests “filling your own cup” and prioritizing things that please you. But don’t lean fully into “main character syndrome,” she says. “[You don’t want to feel] uncomfortable if you’re in a room and not the loudest,” or reduce your partner and friends to secondary characters in the story of your life. It’s all about balance: Give yourself center stage but be able to share the spotlight.

4. Make A “Request For Change”

You’ve likely heard the advice to not try to change your partner, but Johnson has a slightly different view: “Change in anybody is possible,” she says. “It depends on who actually wants that change.” In a relationship where your partner is selfish, put the onus on them to care enough to change. “After a conversation, it’s left to that partner to decide to change or stay the same.”

For the highest likelihood of success, she suggests making a specific “request for change.” Instead of saying something like, “You never think about what I want to do,” give a specific request, like, “You know I like to play a role in our social plans, too, and I would really appreciate you checking in with me before signing us up to go somewhere with your friends.”

5. Be On The Lookout For Gaslighting

If your partner responds to your feelings with respect, you’re on the right track. But if they doubt your perception of events, argue with you about what really happened, or tell you that your feelings aren’t valid, they’re gaslighting you, and it’s unlikely you’ll make any progress, Johnson says. “People in gaslighting mode never segue into full acceptance and make the change for themselves,” she says.

If your partner is being particularly selfish one week, or isn’t responding well to your attempts at change, it might be worth taking a temporary break from the relationship. Ryan calls such a move a “save-cation.” “You say, ‘I'm feeling burnt out, everything is a bit cloudy for me, and I need to detox from everything so I can tune into myself. I need a moment to be selfish and practice self-care, and that is going to show up as me taking a moment to take stock,’” she says.

You don’t need to frame the time apart as your fault. Instead, approach it as a time for setting boundaries and demonstrating your partner that you’ll take care of yourself, and you expect them to respect that and do the same.

7. If Necessary, Break It Off

Staying in a relationship with someone who doesn’t prioritize your needs and shows no signs of changing is a surefire way to be disappointed. If your best attempts at communication aren’t getting you anywhere, it’s time to say goodbye. And at the end of the day, it might actually teach your partner that their actions have consequences. Just don’t stick around to find out.

This article was originally published on May 9, 2016