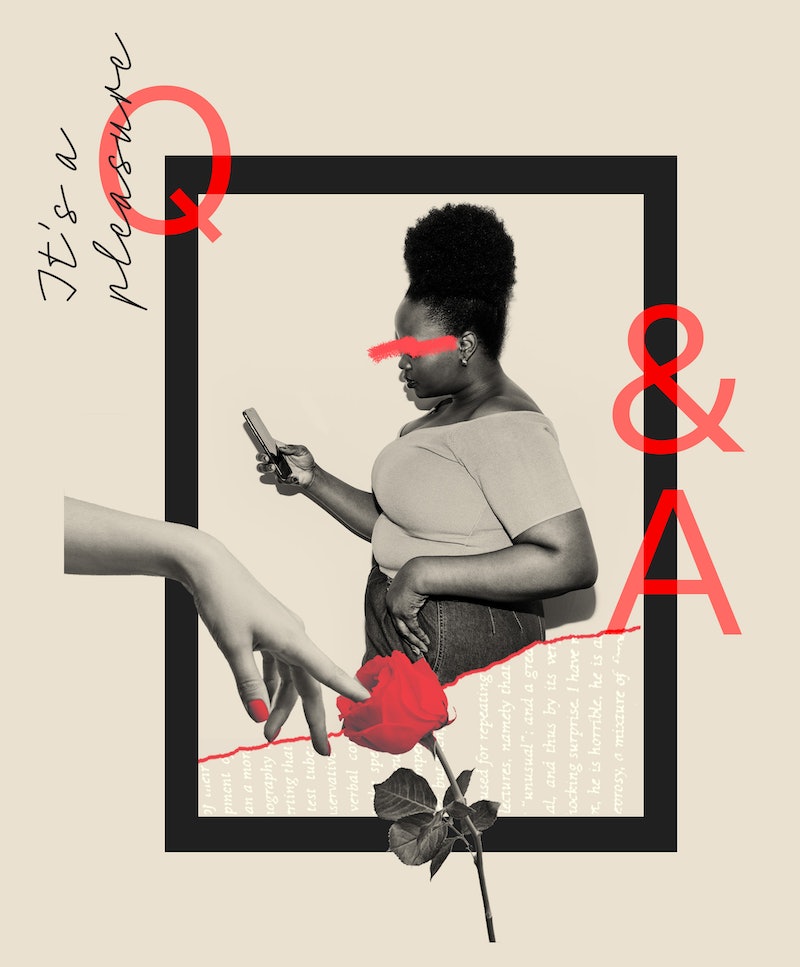 Q: I am a curvy woman, size 18-20. I’ve often been able to score a date on dating apps but never have I met someone in real life and been able to have a date with them. I have issues with body confidence and have worked really hard on myself to get to a place where I’m confident. However, I’ve been on dating apps recently and have not been getting any attention whatsoever. I don’t know if it’s a rut, or if the people out in the world right now are not my people, but I can’t help feeling less confident knowing that I’m not getting swipes back.

A: I am, at my very core, against dating apps. Of course, this is very easy for someone who has been in a relationship for six years to say, so please know that I’m aware I sound like a… butthead. The problem is that it flattens the experience of attraction out into something we all think and feel we have a little control over. It gives you prompts and silly questions, the choice of the best photos and the most specific age range. It feels like you get to decide how others are going to perceive you, but it’s about as successful as an app where you just write down your favorite brand of sliced bread and then people pick you based on that. A dating app might be, in some ways, a reflection of you, but it’s not a reflection of how attraction works. I would never have picked my boyfriend on a dating app — for a hookup or otherwise. It’s not that I think he’s bad-looking (obviously!), it’s just that he wasn’t at all the type of guy I was looking at or for, and in order for me to risk meeting a stranger alone, I really needed someone to be exactly my type. Also, a lot of his photos were “funny” pictures and I can’t deal with that.

I’m not suggesting that dating apps never work. Obviously they do, otherwise none of us would be using them. They can and have worked many times, but it’s the exception and not the rule. This is, of course, obscured by the thrill of it working out, but if you think about how many people whose faces you’ve seen on the apps whom you haven’t dated/kissed/hooked up with, the “success rate” is… negligible.

I’m pointing this out not to make you feel hopeless, or to urge you into despair, but to remind you that dating apps are fake. Their success skews, if anything, toward the people who are the most conventionally attractive or those who get fetishized. No one is their most generous self when they’re swiping through a dating app because they literally do not have the time to be. You don’t have time to get to know the person and what they’re like and how silly or kind or imaginative or loyal they are. You don’t get any of that info in any kind of meaningful way. What you’re left with is a deck of cards someone put some faces on and a bad magic trick.

So why did it used to work better for you and it isn’t right now? I’m absolutely not going to condescend you and say that it’s because you aren’t in the right headspace or because you aren’t putting yourself out there enough. It’s not because of your profile photo or your bio. It’s not because of Mercury retrograde or the level of self-love you’re feeling at the moment. It’s just… algorithms and apps. It’s a house of cards built to make some guy who drinks Bulletproof coffee a lot of money. If I could magically make you let go of the outcome of dating apps and untether your self-worth from it, I would do it in a heartbeat because the reason your profile isn’t getting the same interactions as before could be anything — which means it’s nothing.

Much easier said than done, of course. I’m not here to tell you to just push a little more and love yourself a little harder and that will be the solution to all that ails you. It doesn’t work like that. The sh*tty truth is, in my opinion as someone who is overweight, that no matter how much body positivity you throw at yourself, there are days and moments and weeks and years where the messaging of our fatphobic world seeps in and sticks. It just happens. The work of undoing what the rest of society has done shouldn’t fall only on you. Your opinion shouldn’t have to, by itself, outweigh the very loud and wrong opinion of society, that bodies that aren’t thin aren’t worth as much. And more to the point, you shouldn’t have to shoulder all that and stay happy about it — stay in a good mood about it, never complain. You get to be mad, sad, hurt, pissed off, heartbroken, and bitter that dating is harder or different for you than it is for other people. You are welcome to feel those things and in fact, I think you should allow yourself to from time to time. Every month on the 27th, you can have a wallow day. A day where you gripe to a friend or your journal or your therapist about how this sh*t sucks. You need an outlet of some kind, though, because a lot of people are going to (or already have) put this all back on you. They’re going to say it’s about confidence and loving yourself harder, or that it’s about putting yourself out there more.

You’re doing those things. I’m sure of it because if you’re dating and you’re curvy, most of those things are necessary. They’re inherent. You’re putting yourself out there. You’re confident. You aren’t filled with self-loathing. The assumption that you must do more is a little bit fatphobic, I find. My suggestion — and it’s not going to bring you gobs of dates very quickly; I swear if I knew how to do that, I would tell you — is to let yourself off the hook. To accept that you can’t do it all, that some things will work and some things won’t and it doesn’t mean you’re lacking or not trying. Go easy on yourself. People will come along who want to date and kiss and hook up with you more than they can even express. They already exist, and you will find them and it doesn’t have to be a full-speed, pedal-to-the-metal rush to get there. Them finding you doesn’t determine your worth. You’re already magnificent.

In the meantime, you’re allowed to be impatient. Just don’t let it stop your life. Keep doing things that make you feel happy, and if that doesn’t include dating apps, fantastic. They’re only making you feel worse right now, it sounds like, and they aren’t working. I don’t think that at the end of your life, you’re going to look back and think, “I wish I’d been on Tinder more.”

More like this
Help! I Love My Boyfriend, But I’m Struggling To See A Future With Him
By Sophia Benoit
30 Clever Ways To Slide Into Your Crush's DMs
By Griffin Wynne, Carolyn Steber and Lexi Inks
Breeding Kinks Have Been On The Rise Since Roe V. Wade Got Overturned
By Lexi Inks
Hinge Added A Video Prompt Feature, So Get Your Camera Rolling
By Hannah Orenstein
Get Even More From Bustle — Sign Up For The Newsletter