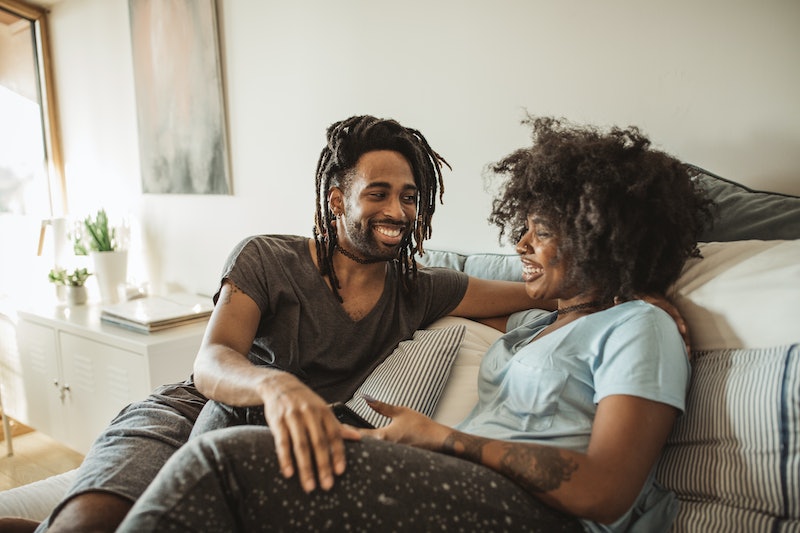 Over the last few decades, the cultural standards for “normal” relationships have begun to change in significant ways. In place of the traditional nuclear family, more and more people are starting to opt for things like platonic partnerships or open relationships. While the values of the mid-20th century largely called for heteronormative, monogamous structures, the current zeitgeist has placed more value on healthy, fulfilling partnerships — even if that means involving more than the standard two-person relationship.

Whether it includes swinging, polyamory, or relationship anarchy, ethical non-monogamy is becoming both considerably more common and less stigmatized than in the past. Because of this, the cultural understanding around healthy non-monogamous dynamics is shifting as well — especially when it comes to boundaries. Not unlike in traditionally monogamous relationships, people in non-monogamous partnerships should figure out what rules to set in an open relationship.

Not sure where to start? For some guidance, Bustle hit up the experts for their take on setting open relationship rules — here’s what they had to say.

1. Have A Monthly Relationship Check-In

Especially in an open relationship, consistent communication about where your partnership is at is crucial, as well as getting a temperature check on how comfortable each of you is with the current boundaries you have set. “[A monthly check-in] allows the couple to air out concerns or set new expectations they may have learned throughout the month,” says researcher and sex and relationship expert Dr. Tara Suwinyattichaiporn.

Within these conversations, you and your partner may realize that you need tighter boundaries in order to feel secure for the time being. Or, on the other hand, they also may help you recognize when you’ve outgrown certain rules and can loosen them up.

For some couples, like Dan and Lacy, a consensually non-monogamous couple in their 30s and hosts of The Swing Nation podcast, having sex with close friends or people in their community is acceptable within their non-monogamous relationship. But others prefer to have a separation between the sexual aspect of their open relationship and their social life or home. Suwinyattichaiporn recommends figuring out which works best for your relationship.

“Check proximity boundaries because some people prefer that you only sleep with others not in the same circle, town, city, or even country,” she tells Bustle. As an example, some couples only have sexual relations with others when they’re out of town. For the sake of avoiding conflict or hurt feelings down the line, talk with your partner about deciding on a boundary for how “close” the outside partners you choose to sleep with can be.

3. Decide On A Sleepover Rule

If you are a couple who lives together, you might want to consider rules specific to your shared space and sleeping arrangements. Do you want to allow outside partners to sleep over at your shared home? Are external sleepovers OK? Suwinyattichaiporn suggests discussing the sleepover rule in order to avoid relationship anxiety. “I know some open couples that have this rule where you can have sex with other sexual partners, but always come home every night,” she shares. Especially if you’re new to the open lifestyle, agreeing that you’ll always share a bed every night can help ease some initial discomfort or feelings of insecurity.

Even if both you and your partner are equally as enthusiastic and ready to start having sex or playing with other people, setting rules and boundaries for intimacy outside of intercourse before you begin is a great way to safeguard against immediate chaos. If you haven’t established that one or both of you isn’t comfortable with the other kissing someone else, for example, and it happens unexpectedly, you’ll more than likely come across hurt feelings.

“It’s super common for new couples to have a laundry list of rules,” Lacy says. While it’s impossible to define what rules newly open couples should set — because every partnership is vastly different — Dan says that some common ideas they have come across are no kissing others (at first), no hand holding, and no climaxing with outside sexual partners.

Whether you and your partner play together in a group sex environment or keep things totally separate, one rule to consider might be to keep open lines of communication between everyone involved — sexually or otherwise. For Dan and Lacy, this looks like putting themselves and other play partners in a group text in order to both coordinate and talk about boundaries, for the comfort and understanding of everyone involved. Even if you prefer to keep things mostly separate, allowing your partner and the people you engage with sexually to communicate as needed might foster a sense of trust and an extra layer of comfortability.

After some time and experience with consensual non-monogamy, it’s possible that you and your partner will feel comfortable scaling back on your list of specific rules and boundaries. “In most cases, couples who communicate with each other openly become wide open to all the things after a few months,” says Dan.

If and when this happens, Lacy suggests that pushing your initial boundaries may lead to even more fulfillment and exploration together. “People think they have to jump all the way into this lifestyle like it’s all or nothing, and that’s not the case at all,” she tells Bustle. Her tip? Taking it slow and communicating as you go can make a healthy non-monogamous relationship possible.

One rule Suwinyattichaiporn doesn’t recommend? The time strict rule. “Some couples will start by committing to opening up their relationship for a month,” she says. “They make it a rule to strictly follow even though someone may not be into it after a week.” By forcing yourselves to stick to something that isn’t working, you’re setting yourselves up for resentment and even a possible end to the relationship once someone reaches their breaking point, Suwinyattichaiporn notes. “Being dynamic and open for communication and renegotiation is super important in the success and longevity of open romantic relationships,” she adds.

More like this
How To Have A Hometown Hookup Without Catching Feelings
By Lexi Inks
Bumble's "Compliments" Feature Lets You Message Before You Match
By Lexi Inks
Are Capricorn & Aquarius Compatible In A Relationship? Astrologers Weigh In
By Kristine Fellizar
Do I Have To Tell My Crush That I Slept With Her Ex?
By Sophia Benoit
Get Even More From Bustle — Sign Up For The Newsletter