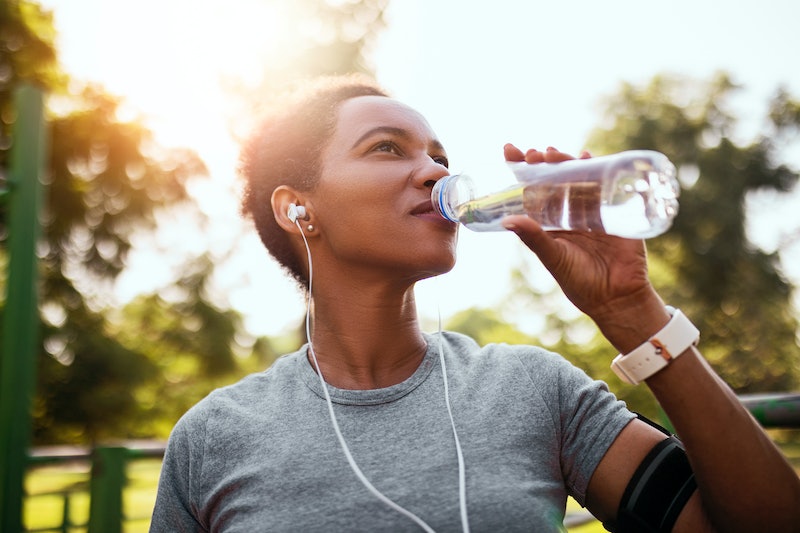 In college, you were a devotee of cool blue Gatorade, but more recently, you’ve graduated to versions of sports drinks without all the added sugar (because you’re now trying to sleep on an adulting schedule, thankyouverymuch). But as the market gets more and more saturated with drinks claiming to be the best for your post-workout and regular old hydration needs, you’re left wondering — what is electrolyte water, anyway?

“Electrolyte water is simply water with electrolytes added in, which may or may not also include added sugars,” Alyssa Pike, a registered dietitian and manager of nutrition communications at the International Food Information Council (IFIC), tells Bustle. “Electrolytes are electrically charged minerals that help regulate and control the balance of fluids in our bodies,” explains Pike. If you’ve ever woken up from a night out dehydrated — ahem, hungover — replenishing your electrolytes probably helped you get back on track. Because of the nature of electrolytes, they can still add subtle taste — an added crispness, perhaps — to your regular water.

Electrolyte water isn’t just popular in your local yoga studio, according to an April 2021 report by Market Data Forecast. Across the world, electrolyte drinks are expected to be a $1.82 billion industry by 2026. The report says that it’s largely Millennials and Gen Z folks who are driving this increase. A lot of the increasingly popular electrolyte drinks aren’t sweetened — and many aren’t even flavored — but that doesn’t mean your days of good-tasting sports drinks are over.

Why go for water with added minerals instead of just the regular stuff? There are plenty of reasons. “Electrolytes are integral to regulating blood pressure, muscle contraction, and blood acid/base (pH) level,” Pike tells Bustle. “There are several electrolytes, but the big three usually found in electrolyte water are sodium, potassium, and magnesium.”

Still, Pike says that you don’t need to specifically seek out electrolytes in your water. “Electrolyte water shouldn't be considered the ‘go-to’ source of hydration,” she explains. “It all depends how much energy (and sweat) you are exerting, and, as a result, how many electrolytes you’re in need of replenishing.”

Unless you’re sweating much more than you usually do, you’re probably good with regular old water, Pike tells Bustle. “We’re most likely to need electrolyte replenishing if we are dehydrated from sweating a lot (like after a long, tough workout or if we've been outside during a long, hot summer day),” she says. Illness might also be a reason to turn to your favorite electrolyte drink. “If you recently had a stomach bug that included vomiting or diarrhea, you are likely dehydrated and need [electrolytes] replenished,” Pikes explains.

You want to grab yourself some electrolyte water from CVS, and your gaze is pulled down the aisle toward all the pretty colors of the sports drinks. Is there a difference between electrolyte water and, say, Gatorade?

While classic sports drinks do generally have electrolytes, they also often include added sugars. That is helpful if you’re looking for a drink with carbohydrates to give you that extra energy burst. But if you want something that’s mostly just water (which might especially be the case if you have the flu), Pike says you might want unsweetened electrolyte drinks instead.

Do you actually need electrolyte water or a sports drink during your workout? Pike says it depends. “Consider the intensity and duration,” she advises. “If you’re working out for an hour or less, regular water will do. But if you’re exercising 75 minutes or more (or if it’s very hot out), then an electrolyte drink is a good idea during or after your workout.”

“Research doesn’t support a health benefit to consuming alkaline water over regular water,” Pike explains. In 2007, the Food and Drug Administration (FDA) issued a statement saying that there just isn’t enough evidence to support companies’ claims that alkaline water can prevent bone loss. So you might want to stick to your electrolytes if you’re looking for some fanciness in your H2O.

Where To Buy Electrolyte Water

Some of these electrolytes come in the form of tablets, meaning you can plop them into your regular water bottle or glass. Whether you’re getting over the flu or crawling your way out of this weekend’s CrossFit class, your body will appreciate the extra kick of hydration.

Iqbal, S. (2019). The Effect of Electrolytes on Blood Pressure: A Brief Summary of Meta-Analyses. Nutrients. https://www.ncbi.nlm.nih.gov/pmc/articles/PMC6627949/

Jung, A. (2005). Influence of Hydration and Electrolyte Supplementation on Incidence and Time to Onset of Exercise-Associated Muscle Cramps. Journal of Athletic Training. https://www.ncbi.nlm.nih.gov/pmc/articles/PMC1150229/