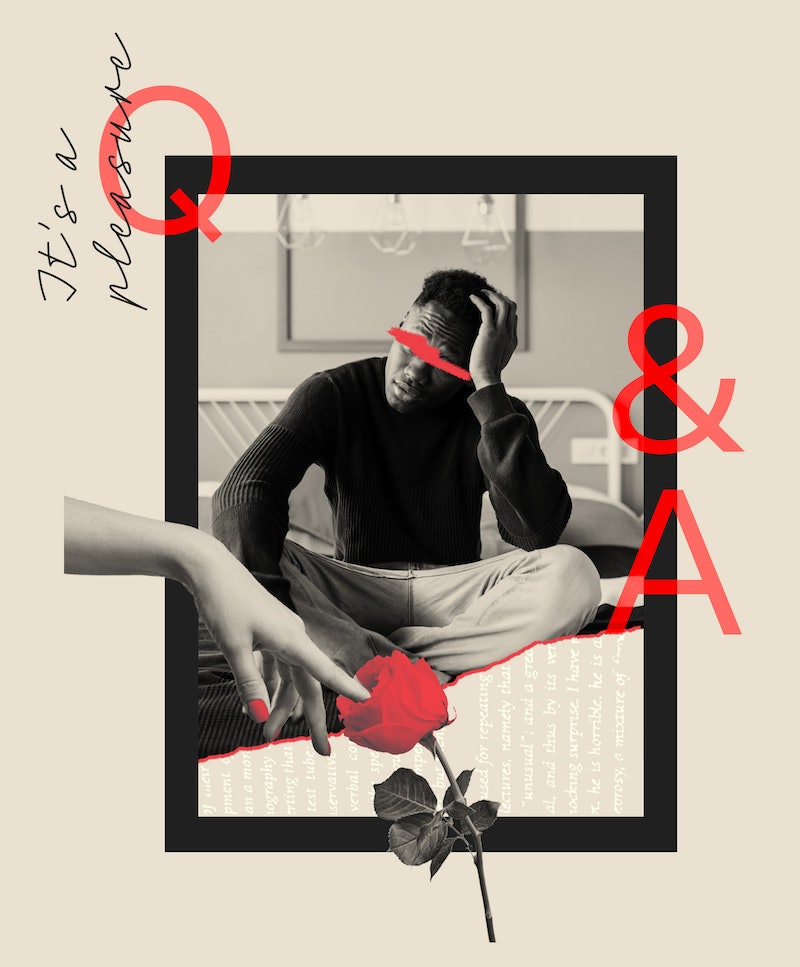 Ezequiel Giménez/Stocksy
By Sophia Benoit
June 2, 2022
It's A Pleasure

Q: I’m a 31-year-old straight cis male, and aside from a few flings and a couple of on-and-off situations, I was effectively single for my entire twenties. I was prone to relapsing with my ex every few years, each instance only ever being physical and always ending badly. I’ve always been shy when meeting new people and have issues with self-confidence, made worse by the fact that I’ve never been able to come during sex. Perhaps the positive spin is “I last a long time,” but I’m only ever able to finish with my hands. I’m insecure about it, but I also never want any woman I’m with to feel like they’re the reason it’s not happening. It’s probably a big part of why I’ve been afraid of properly wading into the dating pool. What advice do you have for getting past this mental block and finding the confidence to get out there again?

A: Are you ready for me to let you in on The Big Secret? My friend, pretty much all of us have certain ways we come. If there’s a person out there who can invariably finish in any position, from any type of stimulation, I have not met (f*cked) them. Certainly, there are those lucky folks out there who can get off in a variety of positions semi-reliably. The folks for whom a blow job in a closet is the same as doggy style on a hotel bed. Lovely for them! What a boon! But even then, those people have preferences, they have moments where everything doesn’t add up and they can’t come. They have an old trusty move or fantasy that can help them over the hurdles. They have a partner who has been with them 47 years and knows to lick them right there during foreplay to get the party started.

And, of course, there are the folks like you whose orgasm scenarios are more limited. It’s a bummer! You’re more than welcome to feel ticked off about it. Or sad. Or mad. But I’m inviting you (begging you) to try to let go of the feeling of shame or inadequacy or insecurity about it. I know it’s cliched to the point of frustration to say this but I can’t avoid mentioning this: a good sex partner will not care. They will not give two sh*ts what the thing is that makes you come; they will simply be thrilled that you know what does work and they’ll be happy to be there having sex with you!

The unspoken corollary to that is that you have to find a good partner. Which is, certainly, easier said than done. On top of that, I do not mean to imply that they are going to hear you explain your situation and then immediately respond in a way that magically erases any insecurities you’ve ever had about your come limitations. (Literally, no one is capable of that!) I just mean there are thousands of people out there who, when given the information that you can only get off from your own hand, are gonna be like, “Cool! I guess we know how sex is gonna end most of the time for you! Great, now can we get back to making homemade granola?”

Here’s the script I would use with a new partner. (In fact, it’s pretty close to the script that a partner of mine used when he told me he had a hard time finishing during sex except for in one particular position). “Hey, I just wanted to let you know that I have a hard time coming from sex for some reason, even if it feels amazing. It’s been a thing my whole life, so I wanted to give you the heads up that in order to come I have to use my own hands. Because of that, I can last a while, so just let me know when you’re finished having fun and we’ll go from there!” Obviously, use your own words!

All of this is of course very easy for me, a person who’s not dealing with this issue, to prescribe. But how do you get over the insecurity? Well, unlike sexual partners, most insecurities respond well to faking it. You’re more than allowed to pretend like this is not a thing you’re bothered by. You can enter into a sexual situation and decide that you are going to act as if this is No Big Deal to you. This in turn will invite your f*ck partner to also act as if it’s no big deal. (Which, again, it isn’t). While there might be people who have a certain specific fetish about where they’d like you to come, I find it hard to imagine that any partner is going to draw a firm boundary that they need you to not finish with your own hands. (If that person is out there, you two are sexually incompatible, which is a dealbreaker! ). Most people are going to be pretty indifferent towards what the position is that gets you off.

When you are later outside of the sexual situation and things are getting a little more intimate or you’re having some vulnerable conversation time, you can bring up how you’ve felt or do feel about the fact that you have a hard time finishing. You can say something like, “In the past, I’ve had partners feel like me not being able to come during sex was their fault or something they needed to try to fix — a challenge for them. It may have been well-intentioned, but that ultimately made me feel insecure about it. I don’t want you to feel like this is something for you to solve, but I also want you to know that it’s something I have felt bad about in the past. I’m working on not caring about it, but sometimes I get in my head.”

All of us get in our heads about sex from time to time (or every time!). Making someone else feel good in any situation — even if it’s not sex! — is a classic recipe for overthinking. Think about gift-giving or giving a best man speech or planning a surprise party. I humbly suggest, even though it will feel selfish and icky at first, that you spend at least a little bit of time while having sex trying to make sure that you are feeling good, too. Your partner doesn’t need adult supervision every single second. They need a partner who is open and honest about what feels good. And please trust me that it’s hot as sh*t to have a partner who’s actively going after what works for them, (obviously consensually), who’s invested in their own pleasure as well as their partners. It’s hot to ask for what you want and need in bed. It’s hot to try new things, but it’s also perfectly reasonable to — especially at the end of sex — return to the things that reliably make you come! This isn’t some big knock on your dateability just because you are self-conscious about it.