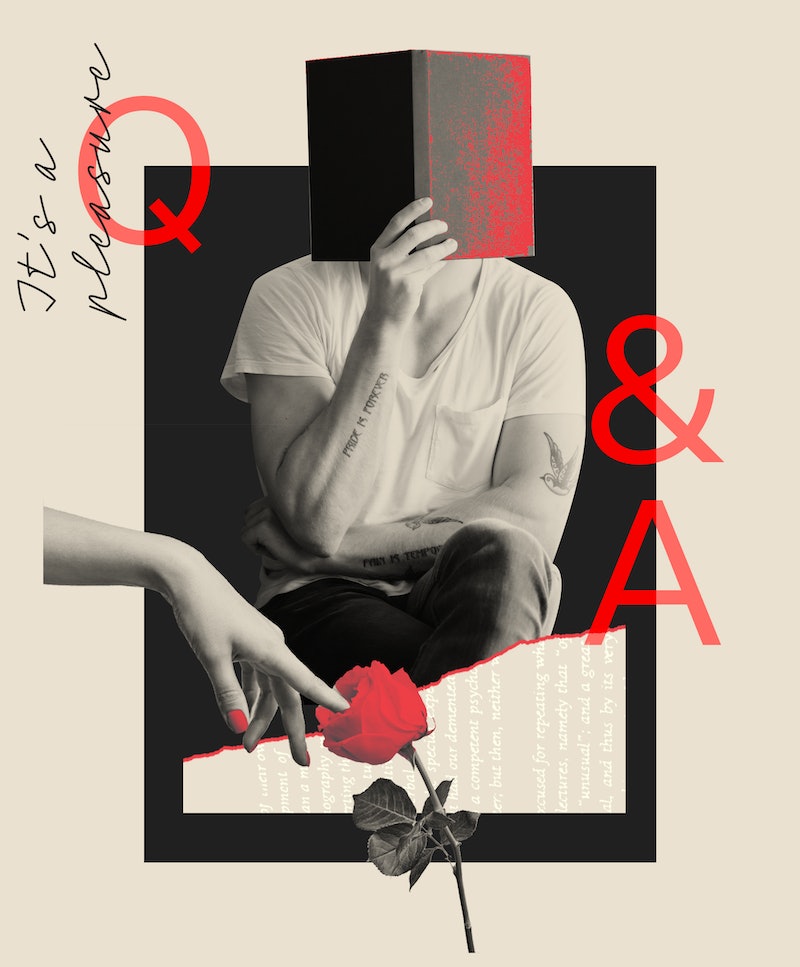 Yaroslav Danylchenko, B&J/Stocksy
By Sophia Benoit
Sep. 8, 2021
It's A Pleasure

I’m a 31-year-old romance author. I’m also dating through dating apps. Recently I went on a first date with a dude, told him about my work, and now he’s read my self-published novel. We’re going on a second date, and I don’t think I want to sleep with him. But now that he’s read four explicit sex scenes I’ve written, he probably has different expectations.

I’m tired of this extra level of dating anxiety. Do I stop telling people my pseudonym? Do I lie about the genre of my books? Or am I over-worrying?

For some reason that is unknown to me, a nonmedical professional, doctors always ask for your profession on intake forms. I always put “writer,” and the doctor always asks, “What do you write?” I used to say, “Oh, I’m a sex and relationships writer.” Virtually the same exact exchange occurred in Ubers, at banks, really anywhere that your job might come up. Some people handle it just fine, but often, after you mention that you write about sex, things just get a little... odd.

The knee-jerk answer here would be to tell you, “Be proud of it! Talk about it! You shouldn’t be ashamed!” And you shouldn’t be ashamed — you have a cool career! And, anyway, writing about sex is precisely 0% shameful. But more importantly, sharing everything immediately is not a prerequisite of pride.

And that goes for all parts of yourself, not just your career. Perhaps it’s a history with abuse or a mental health struggle or your wildest sexual fantasy. Keeping those things to yourself, at least at first, doesn’t mean you’re ashamed of them. In general, early on I err toward the side of You Don’t Owe Anyone Anything rather than Lay All Your Sh*t Bare Day One. You simply can’t trust some people with your vulnerabilities. Some will be kind, some will be cruel, but plenty others just won’t get them — and it takes a minute to figure out what sort of person you’re dealing with.

There are, of course, things you should tell people early on in dating, especially if it involves your (or their) safety. If your first date is at a restaurant and you have a life-threatening shellfish allergy, you should share that. If you have an STI and you’re going to have sex, disclose that. But short of need-to-know information, you do not need to spill anything up front.

A lot of us have a tendency to overshare on early dates because we want to know quickly if this is going to “work out” or not. But, honestly, you’re about as likely to find a dealbreaker at month five as you are on night one. The point of a first date is to get to know one another broadly: Give the other person a good idea of who you are, and listen as they do the same. But keep in mind that both of you are creating general sketches of yourselves; if you like each other, you’ll shade in the details later.

So tell your dates about your work, but do it gradually. It could go something like this: On the first date, tell them you’re an author, but wait to share your pen name until date three or four. Maybe you’ll find that you like waiting until after having sex with someone to share your pen name with them; maybe you’ll end up feeling like it’s too weird for them to not know before you sleep together. Or maybe you’ll share your pen name and genre, but ask them not to read your books until later (a totally fair ask). As a general rule, if you feel excited to share more about yourself, then do it. If you feel dread or anxiety, then here’s your permission to keep that detail to yourself a bit longer.

Don’t blur your boundaries for other people’s expectations.

As for this guy specifically, I do wonder if he may see his having read your book as something more intimate than it really is. If he does want you to sleep with him before you’re ready, that’s totally manageable. For example, if he invites you back to his place and you don’t want to go, but might in the future — simply say so! You could say something like, “Thank you for the invite; I’m really liking this, but not tonight.” Don’t blur your boundaries for other people’s expectations.

Then again, he might just be a cool guy who understands what fiction is and who was trying to get to know you better. Are you over-worrying? Possibly, but that’s what dating is all about! (OK, no, it’s not, but anxiety does tend to shadow budding romance.) Try to figure out what you’re worried about, and then try to identify boundaries that would help you feel more secure. If you’re worried people you date want to move faster than you’re ready for when it comes to sex, and if sharing that you’re an author who writes about sex exacerbates that worry, then change what you tell them! You don’t owe all of yourself to every person upon meeting them.

It’s A Pleasure appears here every Wednesday. If you have a sex and/or relationships question, email Sophia at BustleSexAdvice@gmail.com.