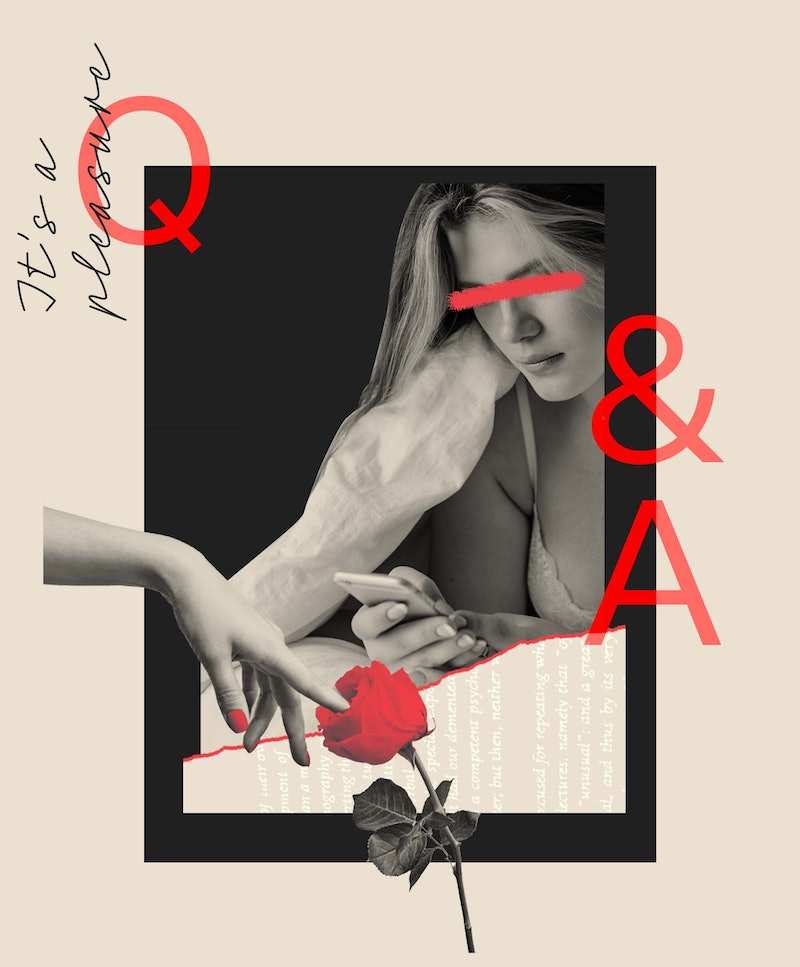 Julia Volk/Stocksy
It's A Pleasure

Q: My ex and I dated for seven years and broke up two years ago. It was my decision, and it wasn’t an easy one, but I’ve never regretted it for even a second. We want different things in life, and we have different priorities and values. I’m so much happier now, and I know he is, too.

I know that not because we keep in touch, but because I check his Instagram every d*mn day. I see the places he visits, the sandwiches he eats, the new girl he’s dating. Sometimes it’s like I go to his account purely to hurt my own feelings. It’s like pressing on a bruise or picking at a scab. Actually that’s a fantastic metaphor, because I feel like it’s keeping me from healing all the way.

A: I recently found out that my college ex had a baby, something he wanted very badly when we were together. (I did not.) I found out by checking his only available social media account, Facebook, and to make things worse, he unfriended me a while back, so I’m only able to see public photos of him, his new wife, and their baby. I was pulling up a photo to show a friend who never met him, and I was perversely glad for the reason to check in guilt-free and see what he was up to, and secretly thrilled by the new information I gleaned. Why?

Because I’m human! At one point in my life, I was putting this person’s junk in my mouth — why wouldn’t I be at least a little curious about where he is now? I mean, it’s a very, very odd thing, to go from loving someone dearly to not being in their life at all. It’s almost eerie that love that deep can fade or end. I think we all have a fascination with our exes and where they are to some degree. I wasn’t even in love with my ex, and I’m still utterly gripped by his milestone developments. Even my incredibly stoic and non-sentimental boyfriend occasionally looks up his exes! In fact, everyone I know does! Including my parents! And if we didn’t have social media to check, we’d be wondering about them just the same. That is normal.

However, and I think you know this, checking in on an ex every single day is a lot, and it doesn’t seem to be giving you anything. In fact, it seems to be actively harming you. So why can’t you stop? I have some guesses, but I also think the answer is multifaceted. Yes, the behavior is painful, and you’d like to quit, but likely — if you look closely — there’s something the habit is giving you.

Perhaps you feel like you deserve to be punished for ending the relationship, and this feels like a small daily dose of your own medicine. Perhaps you miss the person you were when you were together, even if you don’t miss him. Perhaps you’re subconsciously trying to sabotage your current relationship (I can’t imagine your current boyfriend knows how often you ex-stalk) for some reason. Or maybe you’re not unhappy with your current boyfriend, but you feel like you don’t deserve to be happy with a partner at all after ending your previous relationship. I don’t know, but it’s very possible that this routine gives you some kind of bad feeling that fulfills a belief you have about yourself.

Alternatively, sometimes our brains are just d*cks. I don’t know how much you know about intrusive thoughts, but sometimes our brains get really, really stuck, for no good reason! What makes it worse is that often we get stuck on the fact that we’re stuck, and then we start to feel really bad about it. We obsess, and then we obsess about obsessing, and the habit or the thought grows more and more powerful, a snowball rolling downhill. Unhealthy habits are much harder to break than healthy ones, unfortunately, because, as you described, doing harmful things can feel very… indulgent (see also drinking an entire bottle of champagne or dropping $150 on a coat you don’t need).

The silver lining here is that you are not going to do this for the rest of your life; I promise you. Someday this man and his life will become less interesting to you. I’m not saying you’ll never have the urge to check in on him. I think you will! Again, very human and normal. The key right now is to figure out how to change your habits, not your desires.

My absolute strongest recommendation is to block him on everything. (At the very least, you need to mute him so that pictures of him, his new girlfriend, and their blue heeler puppy named Steve-O cannot possibly pop up randomly.) If you don’t think you can do it yourself, ask a friend to smash that block button for you.

To soften the blow, pick a date in the future — I’ll suggest Jan. 27 for no good reason at all — where you’ll unblock him for a day and check in, guilt-free. By then, you might not even be that excited about it. If you make it successfully, treat yourself to a pedicure or a slice of Snickers cheesecake or whatever makes your heart sing. Until Jan. 27, remind yourself that you don’t actually like checking in on his Instagram. Imagine all the things you can pick up if you put down this habit and all the guilt you feel around it! Learning Portuguese, being more present with your current partner, or becoming a certified scuba instructor.

I promise you can and will stop and it will feel really good when you do. I also promise you’ll always wonder about the person you used to love, just like all the rest of us.

It’s A Pleasure appears here every Thursday. If you have a sex, dating, or relationship question, email Sophia at BustleSexAdvice@gmail.com.

More like this
Do I Have To Tell My Crush That I Slept With Her Ex?
By Sophia Benoit
14 Underrated Date Ideas To Try With Your Partner
By Lexi Inks
Bumble's "Compliments" Feature Lets You Message Before You Match
By Lexi Inks
How To Have A Hometown Hookup Without Catching Feelings
By Lexi Inks
Get Even More From Bustle — Sign Up For The Newsletter